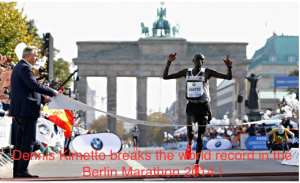 We have in the past 2 decades witnessed hundreds of thousands of runners participating in marathons across the globe. Last year Dennis Kimetto set the world record in the Berlin Marathon at 2:02:58. Kimetto not only beat every body who ran in that marathon but every one else who had ever shown up before any where as he blazed his way to a sub 2 hour 3 minutes record time. His record is still intact. The world has rapidly decided to run longer and at the fastest pace possible. The current mantra is to run many miles at blistering speed in the belief that this will cut down disease and death. Recent data however suggest that this may not be the case; and is actually a partial truth. Running undoubtedly is one of the best methods to significantly reduce mortality, heart disease, hypertension, osteoporosis, diabetes, depression and probably cancer. But the question is how much running is therapeutic or healthy. Phidippides was possibly the first running courier to run 26 miles from a battlefield close to the city of Marathon to Athens to deliver the momentous news of victory against the Persians in 490 BC; but the man collapsed almost immediately after and died. Running too much over decades at race speed is now being considered over dosage; much like intake of excessive medicines resulting in harm to the human body.

Running marathons repeatedly does not confer immunity against heart disease or death. Recent research suggests that slow jogging for as little as a mile per day is far more effective than strenuous aerobic exercise over prolonged duration. A prospective observational study that followed 52,600 people over 3 decades found that there was a 19% lowering of death in the 14,000 runners compared to the non-runners. But on closer examination it was documented that people who ran more than 20 miles a week, at a speed >8 miles/hour, 5-7 days a week did not derive any mortality benefit compared to the non-runners. On the other hand runners who ran 5-20 miles a week at a slow pace of 6-7 miles per hour achieved 25% decrease in death.

Another study (from Denmark) showed remarkably similar results; the Copenhagen City Heart Study showed a 44% lowering of mortality in a group of runners (20,000) followed for a mean of 2 decades. Those who did the best were runners who jogged at a leisurely pace for 1-2.5 hours a week. Moderate running, like moderate intake of alcohol, is healthier than no exercise or excessive running. The Journal of American College of Cardiology (JACC) has published the research this year. People who ran over longer distances did not accrue mortality benefits; they in fact had life spans similar to people who did no exercise. There are caveats in the study in that hard-core runners were only 80 people and causes of death were not analyzed.

A study published last year also in JACC concluded that running as little as 5 to 10 minutes a day at a slow speeds of < 6 miles per hour substantially reduced death and heart disease. The study followed more than 55,000 adults (mean age 44 years) for about 15 years and documented 30% and 45% lowering of all cause and cardiovascular mortality in joggers as compared to non-runners. Weekly running less than 50 minutes, at a pace of less than 6 miles per hour, once or twice a week was enough to increase longevity. Runners have significantly better cardiorespiratory fitness than sedentary folks but beyond a level this fitness is neutralized by pathological changes that develop in the hearts of endurance runners.

A non-fiction bestseller ‘Born to Run’ published in 2009 lionized ultra-long distance running. It described the incredible running exploits of “ Carbelo Blanco” or White Horse who ran 25 to 100 miles every day but dropped dead during a training run when 58 years old. His autopsy revealed an ‘unclassified cardiomyopathy’ with an enlarged thickened heart which had focal areas of fibrosis (“interstitial chronic inflammatory infiltrate”) in the myocardium. The coronary arteries were “focally thickened with mild arteriosclerosis”.

Interestingly MRI scans of runners participating in multiple marathons over decades revealed three fold increased incidence of scarred fibrosis and scarring in the walls of atria and the right ventricle (RV). It has been seen that in a group of runners who had completed 25 marathons over 25 years there was 60% increase in coronary plaque burden compared with sedentary age matched controls. The scarring of the myocardium seen in endurance runners serves as a trigger for abnormal rhythms such as atrial fibrillation and ventricular tachycardia. High intensity aerobic exercise that exceed 60 minutes cause significant volume overload of atria and RV which in turn result in micro tears in the myocardial wall. There is transient increase in troponins and B-natriuretic peptide accompanied by fall in right ventricle ejection fraction. This usually recovers in a week but repeated sustained vigorous long distance running can lead to irreversible cardiac damage. The heart at rest pumps 5 L of blood every minute and this can increase 5-7 fold during intense exercise to 25-30 L per minute. Prolonged stress of this nature results in over stretching and micro tears of the human heart.

Exercise has always been associated with health and longevity but the extent and intensity of effort needs to be clarified. In the mean time it would be prudent to run not more than a couple of marathons if you are not into competitive athletics. In case you plan to become a jogger keep the Copenhagen City Heart Study in mind which showed that jogging was associated with significantly lower mortality (hazard ratio, 0.29) than no jogging after adjustment for age, sex, smoking, alcohol intake, education and diabetes. Mortality with moderate and strenuous jogging was not significantly different from that of non-joggers.

It would be advisable to get a cardiac check up done consisting of physical examination, ECG and a 2D echocardiogram to rule out an underlying heart ailment. In the US, over a period of a decade (2000-2010), cardiac arrest occurred in only 59 people out of a population of 11 million (1.1 crore) runners, an incidence of 1 per 184,000 participants. Of these 59 people, 42 died resulting in an incidence of sudden death of 1 in 259,000 participants. Of the 23 people who died and had complete information the cause of death was hypertrophic cardiomyopathy in 15. One person died of hyponatremia, one died of hyperthermia, while one expired from RV cardiomyopathy. The number of deaths during running are quite low but still tragic and could be avoided to a large extent by prior medical examination.