Aspirin has persisted as the bedrock of secondary prevention for coronary artery disease. Vitamin K antagonists when added to aspirin provide superior efficacy in patients with acute myocardial infarction (AMI) albeit at the cost of excess bleeding. One is therefore wary of adding warfarin to aspirin post AMI despite reduction in reinfarction. Aspirin alone at a low dose is associated with a fairly low incidence of serious bleeding. The addition of a second anti-platelet agent again enhances efficacy but at the price of increased bleeding. The addition of an anticoagulant to dual antiplatelet therapy also substantially increases serious bleeding.

A manufacturer sponsored double blind trial has studied more than 27,000 patients of stable cardiovascular disease. The COMPASS trial randomized patients to rivaroxaban (a direct factor X inhibitor) alone at a dose of 5 mg twice day, aspirin alone at 100 mg a day and a combination of rivaroxaban and aspirin at a dose of 2.5 mg twice a day. The primary outcome was cardiovascular death, stroke or myocardial infarction. The study was stopped after 23 months follow up because there was significant advantage with the combination regimen of rivaroxaban and aspirin versus aspirin or rivaroxaban alone.

Rivaroxaban is a selective direct factor Xa inhibitor that is used to prevent and treat venous thromboembolism and to prevent stroke or systemic embolism in atrial fibrillation. The ATLAS ACS 2 trial has already shown that the rate of composite primary end point (cardiovascular death, myocardial infarction, or stroke) was significantly lower with both 5 mg twice daily and 2.5 mg twice daily of rivaroxaban than with placebo. The ATLAS trial enrolled more than 15,000 patients of recent acute coronary syndrome. The 2.5 mg twice a day rivoroxaban dose lowered mortality significantly. The investigators had concluded that in patients with recent acute coronary syndrome, rivaroxban reduced cardiovascular events while increasing risk of major bleeding and intracranial hemorrhage. But rivaroxban did not increase risk of fatal bleeding. The trial included patients of STEMI (50%), NSTEMI (26%) and unstable angina (24%). 99% of patients were on aspirin and 93% of patients were on a thienopyridine. The mean duration of rivaroxban treatment in the ATLAS ACS trial was 13.3 months. 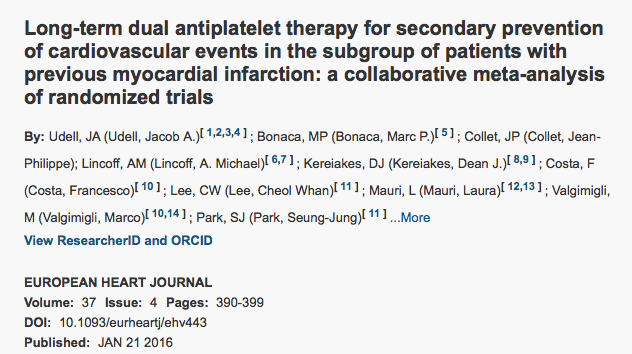 Aspirin is recommended for life in secondary prevention post AMI but it would be premature to advise rivoroxaban in addition to aspirin for life based on a single trial despite being so large in size. Moreover the cost of rivoraxban will need to be taken into account. The absolute reduction in mortality is 0.7% only, which implies that 143 patients will need rivoroxaban with aspirin for 2 years to prevent one death. These patients will be on other drugs such as a statin, ACE inhibitor or ARB, a beta-blocker and most probably anti-hypertensive and anti-diabetic medication. Quite a few patients may not like the idea of taking another drug with modest efficacy and additional expense, especially if they were suffering from stable angina. It may be worthwhile to investigate a combination of a direct factor Xa inhibitor and a P2Y12 (anti-platelet) inhibitor with aspirin alone. The approximate cost in India of 7 tablets of 10 mg rivaroxaban (Xarelto) is Rupees 1050/- currently. 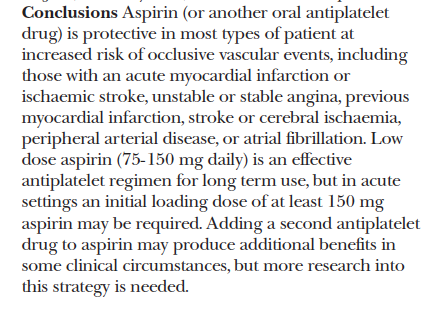