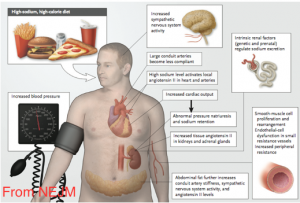 They reckon the population of Delhi NCR is over 20 million and that two thirds of these are young people. One can safely presume that around half are in their thirties and forties; that is almost 10 million people. Epidemiological data indicates that more than a fourth of these young people suffer from hypertension defined as blood pressure exceeding 140/90 mm Hg. That is a sizable population at risk for heart disease and stroke. There is substantial evidence that treating moderate and severe hypertension significantly lowers death, heart disease and stroke. But when you enter the area of mild hypertension the evidence has been equivocal. Mils hypertension is defined as systolic blood pressure 140 to 159 mmHg and diastolic between 90 to 99 mm Hg.

An excellent Cochrane review done 5 years ago found no advantage of treating mild hypertension based on 4 randomized trials involving more than 8,000 patients, who were followed for 5 years. There was no difference in death, stroke, heart disease and cardiovascular events with drug therapy as compared to placebo. Almost 9% of people on drugs had to be withdrawn because of adverse side effects. The investigators concluded that treating mild hypertension in people who did not have previous or underlying heart disease needed further research.

Currently people with mild hypertension but no underlying heart disease are prescribed drug therapy despite there being no evidence in support of this approach. The number of patients being treated is half the population with hypertension as mild hypertensives are as many as moderate and severe hypertension patients. Treatment of hypertension, the commonest clinical condition, is based on the assumption that therapy works, when actually the evidence is unclear. In the absence of evidence a few large randomized trials are needed to confirm efficacy of treatment in mild hypertension, without doing harm and adding costs to the patient. This is of vital importance as globally 22% of the population is affected.

It is also important to note that certain drugs (alpha blockers, immediate release calcium channel blockers, guanethedine) and procedures such as renal denervation lower blood pressure without clinical benefit. Similarly aliskerin (a renin inhibitor) was used in half a million American patient s with hypertension before realizing it caused more harm than benefit.

This year a meta-analysis from Sweden including 15,000 patients with mild hypertension and no heart disease was published in the Annals of Internal Medicine. This study reported after a follow up of 5 years that patients randomized to drug therapy had a significant 28% lowering of risk for stroke, a 25% lower risk of cardiovascular death, and a 22% lower risk of death compared to no medication. This meta- analysis included data from the earlier Cochrane Review on mild hypertension and was a larger study in terms of numbers of patients and events. This review nearly doubled the number of patients, quadrupled the number of cardiovascular events, and provided data on end points not provided in the Cochrane review. Previous studies on mild hypertension the Swedish researchers pointed out had used beta-blockers in the majority of patients; beta-blockers are currently not advocated in treatment of hypertension. The authors however stated that despite their positive findings more adequately powered, large randomized trials are essential to clear the controversy of treatment in mild hypertension.

More than a billion people suffer from a hypertension and therefore treatment of mild hypertension without underlying heart disease with drugs needs to be confirmed. It is imperative that both patient and the treating doctor exhaust all life style modification options before embarking on drug therapy for mild hypertension. The patient must be informed of the benefits of quitting smoking, losing weight, a healthy diet, reduced salt intake and regular exercise. The US spends more than $32 billion annually on hypertension alone. Treatment of mild hypertension with medicines will pressure any state exchequer; and this will hurt, as there are still doubts on efficacy. There is also the specter of adverse effects of drugs on a huge chunk of the population. Thirty two billion dollars for treatment that may not work is a lot of money evaporating into thin air; the only people benefiting seem to be the drug manufacturers.