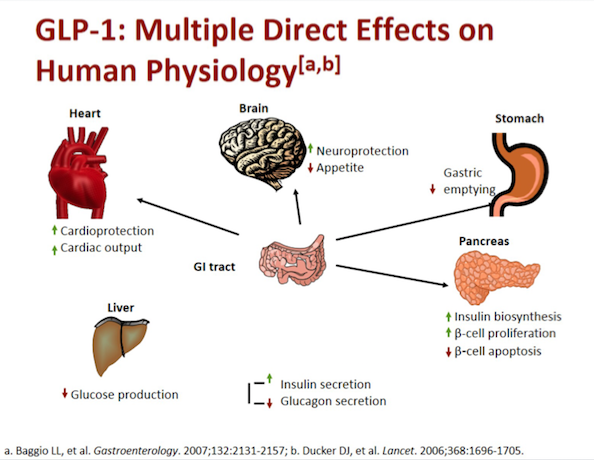 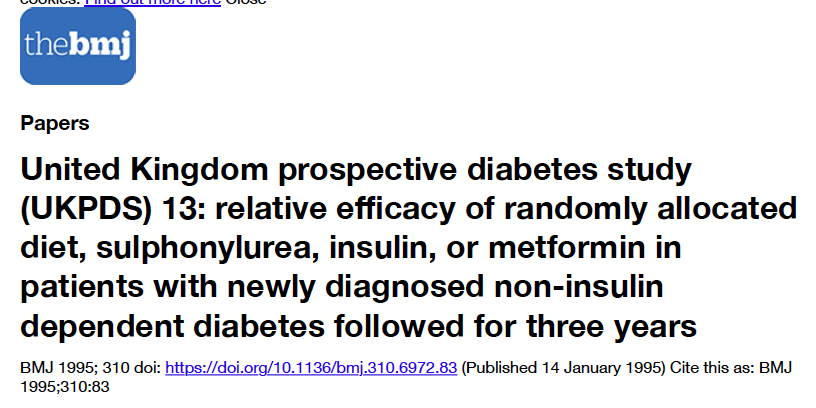 For decades treatment of type 2 diabetes (T2D) has relied solely on treating high  blood sugar level reflected by the  percentage of glycated hemoglobin (HbA1C). But in the last decade it has been realized that cardiovascular outcomes remain largely unchanged despite pulling down blood sugar and HbA1C. Many clinical trials have reported that merely lowering plasma glucose level with anti-diabetes drugs does not modify cardiovascular risk factors. Cardiovascular disease accounts for 80% deaths in T2D. Lowering high blood pressure and correcting dyslipidemia therefore are very important approaches for treating T2D. Increased plasma level or hyperglycemia however has come out as a weak risk factor for cardiovascular complications.

The main action of metformin is to cut down production of glucose by the liver. It’s ability to sensitize muscle or adipocyte to insulin is feeble in the absence of weight loss. Metformin has no effect on beta cell function in the pancreas, which is the main pathophysiological disturbance resulting in progressive hyperglycemia in T2D. No wonder both UKPDS and ADOPT failed to reduce HbA1C in the long term because of progressive beta cell destruction.

A drug that stops or reverses progressive beta cell failure will be most effective in lowering HbA1C and keeping it in the target level without causing hypoglycemia. Apart from insulin resistance and beta cell dysfunction reduced incretin secretion also accelerates beta cell destruction.

The new line of drugs (glucagon like peptide 1 analogue) termed GLP-1 receptor agonists (GLP-1 RA’s) can correct 6 of the 8 Ominous Octet malfunctions. Probably the ability to do so has shown improved cardiovascular outcomes with liraglutide in T2D, albeit modest. The LEADER trial randomized more than 9000 patients of T2D with high cardiovascular risk, in a double blind manner, to liraglutide or placebo. The primary composite outcome of death, myocardial infarction and stroke occurred in significantly fewer liraglutide patients (13% vs. 14.9%) and fewer patients died from cardiovascular causes in the liraglutide group (4.7% vs. 6%; p=0.007). Rates of myocardial infarction, stroke and hospitalization for heart failure were non-significantly lower with liraglutide.

The SUSTAIN-6 investigators randomly assigned more than 3000 T2D patients to once weekly injection of 0.5 to 1 mg of semaglutide (GLP-1 RA) or placebo. Rates of death were similar in both groups but the composite of death, myocardial infarction and stroke was significantly less in the semaglutide group. The researchers concluded that in patients with T2D who were at high risk of cardiovascular risk, the rate of cardiovascular death, myocardial infarction or stroke was significantly less with semaglutide.

The primary outcome of death, myocardial infarction or stroke was similar with once weekly injection of exanatide (also a GLP-1 RA) versus placebo in more than 14,000 patients of T2D studied in a randomized study. About 70% of patients had previous cardiovascular events and 30% did not have previous cardiovascular events. Exanatide was non inferior to placebo after a follow up of 3.2 years. Rates of pancreatitis, pancreatic cancer and medullary thyroid cancer were uncommon, with similar rates in both groups. The lack of cardiovascular efficacy has been explained by the researchers as being due to probably use of SGLT-2 inhibitors in the control group, and basal HbA1C than in the liraglutide trial (8% vs. 8.7%). Above all it can be possible that exanatide is just not as effective as liraglutide or semagluitide. GLP-RA’s increase secretion of insulin, reduce production of glucagon, delay gastric emptying, and also reduce appetite. 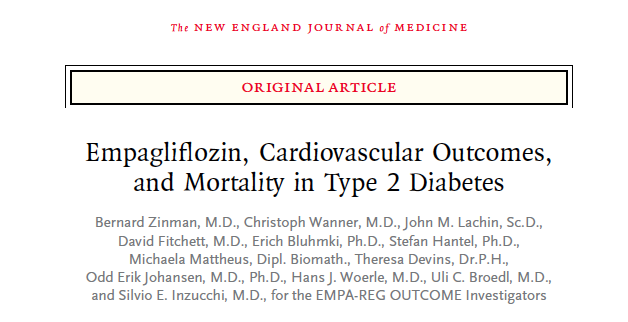 The other drug to show improved cardiovascular outcomes in T2D is emapgliflozin that was studied in more than 7000 patients in the EMPA-REG OUTCOME trial (N Engl J Med 2015; 373:2117-28). The patients were randomly assigned to receive 10 mg or 25 mg of empagliflozin once day or placebo once day. The primary outcome of death, myocardial infarction and stroke was reduced in the empagliflozin group from 12.1% to 10.5%; p=0.04 for superiority). There was no difference in myocardial infarction or stroke but empagliflozin significantly cut down mortality from cardiovascular causes (38% relative risk reduction; 3.7% vs. 5.9%), hospitalization for heart failure (35% relative reduction) and death from any cause (relative 32%). These remarkable effects came about despite insignificant lowering of HbA1C suggesting that empagliflozin was acting at other pathophysiological mechanisms other than blood glucose level. The researchers have hypothesized that empagliflozin probably altered arterial stiffness, improved heart function, reduced oxygen demand, lowered albuminuria, reduced uric acid and blood pressure. Empagliflozin is a sodium glucose cotransporter 2 inhibitor. It decreases sugar level by reducing glucose re-absorption by the kidneys. It can be used as add on therapy or alone by itself. Empagliflozin along with GPLA-RA helps in reducing weight and the most common side effects are urinary tract and genital infections. 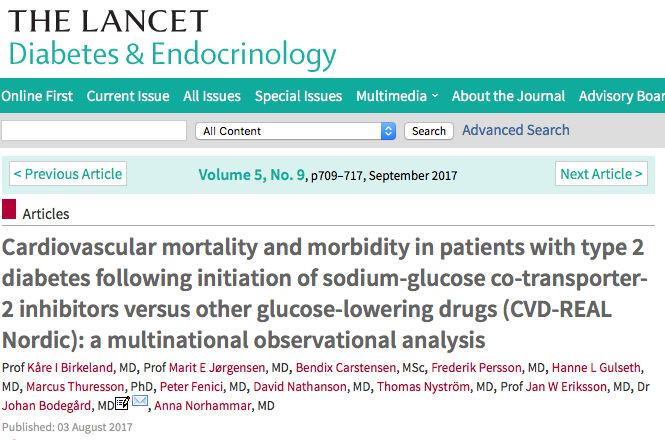 A large observational analysis of the role of SGLT2 inhibitors was published in the Lancet last month. Each patient of SGLT2 inhibitor was matched with 3 users of other glucose-lowering drug by use of propensity scores. Cardiovascular outcomes such as mortality, myocardial infarction, stroke, hospitalization for heart failure and atrial fibrillation, were investigated. All patients were matched and balanced at baseline; SGLT inhibitor (22,830 patients) and other glucose-lowering drug (68, 490 patients). Almost 25% of patients had cardiovascular disease. Daptagliflozin was used in 94%, empagliflozin used in 5% while 1% of patients were given canagliflozin, in the SGLT2 inhibitor cohort. Use of SGLT2 inhibitor was associated with 47% reduced cardiovascular mortality, 22% reduction in major cardiovascular adverse events and 30% reduction in heart failure events. There was no difference in myocardial infarction, stroke or atrial fibrillation, suggesting that SGLT2 inhibitors do not have an anti-atherosclerotic effect. The difference in mortality was the same in patients with and without cardiovascular disease. A hypothesis put forward explaining efficacy of SGLT2 inhibitors is that heart muscle take up beta-hydroxybuterate instead of fatty acids for oxidation. This change in metabolism improves cardiac function and also kidney function.

Another SGLT2 inhibitor named canagliflozin was studied in the longest and largest trial that included 10,000 patients. Canagliflozin reduced the risk of composite endpoint death, myocardial infarction or stroke by 14% as compared to placebo. Heart failure was reduced by 33%, and in addition canagliflozin reduced risk of renal composite outcomes (such as renal death, renal replacement therapy, and reduction of GFR) The CANVAS Program is the largest completed cardiovascular outcomes program of any SGLT2 inhibitor to date, with more than 10,000 patients included. The majority of patients had hypertension, m,any were obese and 66% of patients had a history of cardiovascular disease. Patients were randomly assigned to placebo, canagliflozin 100 mg to 300 mg in a 1:1 ratio. The mean and median follow up time was 5.7 and 6.1 years respectively. Patients with diabetes are 2 to 4 times more likely to suffer from associated co-morbidities, like heart failure and kidney disease. The CANVAS results demonstrate the potential of canagliflozin in lowering such complications in high risk diabetic patients. There was however greater risk of amputation at toe or metatarsal level. 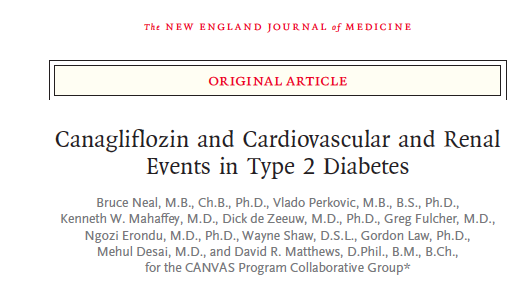 The SGLT2 inhibitor is a tablet while all GLP-RA’s are injections. A GLP-RA that can be taken orally is in the pipeline. The cost of both classes of medicines remains prohibitive in India. It is expected that liraglutide’s patent will be off towards the end of this year. The generic preparation should be substantially cheaper and hence cost effective. All 3 SGLT2 inhibitors are available in India. Hopefully generic SGLT2 inhibitors too will be available in the near future.   Cardiovascular disease complications of T2D need to be grappled with the newer medicines, that correct pathophysiological malfunction underlying raised blood glucose instead of increased blood glucose alone.