Trans catheter aortic valve replacement (TAVR) is an established technique that has been found to be a viable alternative to surgical valve replacement (SAVR) in patients of severe aortic stenosis (AS) at high risk or moderate risk for death following SAVR. Severe AS includes patients of AS who have a valve area equal or less than 1cm2 ( equal or less than 0.6 cm2 per square meter of body surface area) or mean gradient greater than 40 mm Hg or Doppler flow across the aortic valve exceeding 4 meter per second, assessed by 2D echo performed at rest.

Aortic stenosis can become as life threatening condition once symptoms develop. The aortic valve becomes narrowed, obstruction blood flow from the heart to the rest of the body. Patients develop breathlessness, chest pain and can even faint. Open heart surgery in which a mechanical valve with solid carbon leaflets is inserted has been the mainstay of treatment for the last half century. The mechanical valve however requires life long anticoagulation or blood thinners. Biological valves made from cow and pig heart tissue are also implanted when anticoagulation is undesirable, such as in patients who are old (more than 65 to 70 years, pregnant women, and in those who are incapable of takin blood thinners for life).

It was inevitable that the next target would be patients of severe AS at low risk defined as predicted 3% risk of death by 30 days. We now have 2 large studies that have taken the interventional cardiology world by a storm. In fact the entire audience at the latest American College of Cardiology Meeting was left breathless the presentation of these 2 studies; both studies were published simultaneously by the New England Journal of Medicine. 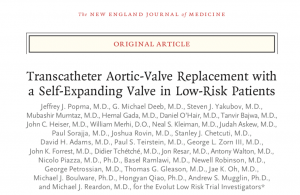 The first trial to be discussed used a self expanding valve in more than 1400 severe AS patients (N Engl J Med March 17). The researchers compared outcomes of SAVR ( in which the chest and heart are opened in the operation room) versus the far less invasive procedure of TAVR, in which the aortic valve is inserted via the groin. All patients were considered ow risk ( predicted death less than 3% at 30 days); 65% were male while mean age was 74 years.

At 30 days the TAVR group had a lower incidence of stroke, acute kidney injury, bleeding complications and atrial fibrillation. There was however a higher incidence of moderate aortic regurgitation and need for permanent pace maker implantation. By the end of one year patients treated with TAVR had larger valve area and lower gradient across the aortic valve. After 2 years incidence of death or disabling stroke was more or less similar in both group of patients ( 5.3% TAVR vs. 6.7% SAVR). The take home message was clear; the data provided compelling evidence of safety and efficacy with the catheter aortic valve in patients with severe aortic stenosis having low risk. The researchers used a novel Bayesian analytic method that predicted event rate in all 1400 patients even though 850 of these patients were analysed at 2 years. Results of the remaining patients are awaited but are expected not to vary, but presently this may be considered a limitation.

The Food and Drug Administration is expected to approve TYAVR for low risk patients. Almost 60,000 patients get intervention for severe AS annually in the USA, with the FDA approval another 20,000 patients would be eligible for TAVR in a year. The problem with aortic stenosis is that there is no way to prevent progression of the disease, and the only treatment once the stenosis gets severe is replacement of the valve. 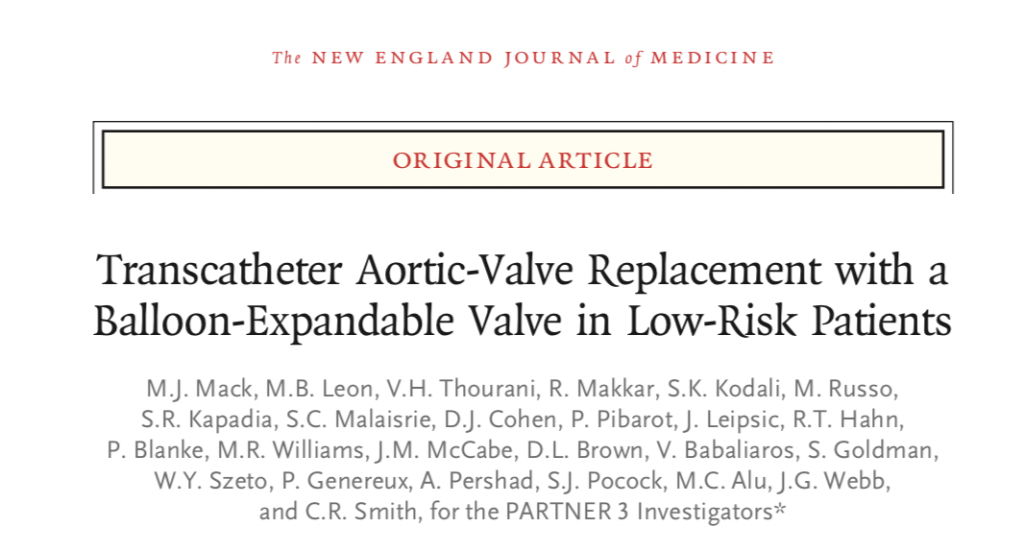 The other major study backed by Edwards ( N Engl J Med March 17,2017) had stunningly better outcomes with a balloon expandable trans catheter aortic valve. By one year only 8.5% patients died, had a stroke or were re-hospitalised, as compared 15.1% patients signed to surgical valve replacement. Moreover pacemaker implantation was similar in both group of patients. Notably with both TAVR valves, hospital duration and recovery times were shorter as opposed to SAVR. The Partner 3 study comparing TAVR with the Sapien 3 valve to open heart surgical replacement in 1000 severe aortic stenosis patients, reported that TAVR was superior to surgery in preventing death, stroke and repeat hospitalisation, at one year. There was crucially no significantly greater incidence of permanent pacemakers or development of moderate or severe aortic regurgitation.

In the United States, TAVR costs around $ 26,000 compared with $15,000 for a surgical valve operation. The current situation in India is quite grim. The cost of TAVR in a corporate hospital is no less than Rupees 25 lacs, whereas surgery would cost from Rupees 2.5 to 3.5 lacs in a corporate hospital, and even less in a government set up. Obviously most patients would recoil at paying up Rupees 25 lacs when surgery albeit more traumatic is staggeringly less costly. The high cost of TAVR in India will certainly not help in increased procedures.

More patients would now get the TAVR procedure because younger patients at low risk for death would opt for it. The average age of patients in the Partner 3 trial was 73 years, and the average age of patients in the Evolut (self expanding valve) was 74 years. The question of durability will linger but it must be noted that the tissue valves used during open heart surgery do last more than 10 years, TAVR valves also employ animal tissue. A lot many cardiologists are very excited and most agree that the latest TAVR results make a paradigm shift in treatment of severe aortic stenosis. For decades, stenosed or blocked aortic valves have been treated by splitting open the sternum, stopping the heart and sewing in an artificial valve. The TAVR valve will most certainly make things easier for the patient if done by a reasonably trained operator.The patient with low risk can now be told that he or she will get comparable results if not better than open heart surgery at one year and also upto 2 years, with less stroke, less death and less hospitalisation. The results available by these 2 randomised trials extend from 1 to 2 years only, these patients therefore will need to be followed up longer to establish durability of the TAVR valves.

Shares of Edwards , which makes the balloon expandable valve, have risen by a stunning 10%, the biggest inter day gain since April 2017. Paradoxically shares of Medtronic the maker of the self expanding TAVR valve, albeit reporting similar incidence of death or stroke at 2 years between TAVR and open heart surgery have declined by 2.5%.