Cardiac resynchronisation therapy (CRT) or biventricular pacing has rapidly evolved as the bedrock for treating patients with severe hear failure on optimal medication (beta blockers, aldosterone antagonists, and ACE inhibitors). It has been observed that CRT improves ejection fraction, quality of life, symptomatic status and above all it significantly reduces mortality. It is most effective in patients of systolic heart failure in NYHA functional class III – ambulatory IV, having LV ejection fraction less than 35%, and QRS duration greater than 120 ms . Crucially the patient should be able to live at least one year. The mechanisms by which CRT improves cardiac function are complex but the paramount reason is it’s ability to synchronise contraction of the failing left ventricle. Left bundle branch block leads to dyssynchrony in left ventricle contraction, which means that all segments of the chamber do not contract uniformly. There is also dyssynchrony in contraction between the right and left ventricles. With establishment of chaotic contraction there is compromise in stroke volume and also cardiac output. CRT also improves b-adrenergic responsiveness and other cellular functions.

The MADIT CRT randomised 1820 patients to CRT and no CRT therapy against the background of optimal medical therapy. Continued follow up for 7 years shown that in patients with left bundle branch block there was 41% reduction in death, an absolute reduction of 11% as compared to patients not on CRT. The substantial reduction in mortality was seen in patients already on beta blockers and ACE inhibitors ( and angiotensin receptor blockers). The MADIT -CRT trial included patients in NYHA class I and II. 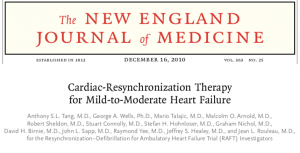 The RAFT trial randomly assigned 1798 patients with NYHA class II and III heart failure, a left ventricle ejection fraction of 30% or less, and a QRS duration of 120 msec or more to receive either an ICD alone or an ICD plus CRT. The researchers concluded that patients assigned to ICD plus CRT had significant improvement in survival and hospitalisation after a follow up of 40 months. The majority of patients were on a beta blocker, ACE inhibitor, or ARB (90 to 97%). More than 40% were on spironolactone. There was a significant reduction in death in NYHA class II patients. Both RAFT and MADIT-CRT concluded that CRT results were best when QRS duration ranged from 150 msec and above.

Earlier the COMPANION and CARE-HF trials had demonstrated significant lowering of mortality of 36% with CRT. These 2 trials randomised patients in NYHA class III or IV. CRT however does not seem to work in patients with normal QRS duration. Here lies the problem because a large number of patients with severe systolic heart failure do not carry a QRS greater than 120 msec. We now have a device that can work in such patients.

Cardiac contractility modulation or CCM is a technique capable of stimulating the heart during the absolute refractory period. There is no contraction but a biochemical reaction is triggered locally that appears to improve cardiac contraction. This biochemical reaction taking place at the cellular level at the stimulation site gradually expands to remote areas of the left ventricle to further improve contractilty. CCM signals are nonexcitatory electrical signals that amplify cardiac muscular contraction.

A recent publication (J Am Coll Cardiol HF 2018; published May 10), concluded that CCM is safe, improves exercise tolerance and quality of life in patients with heart failure. CCM was also seen to cut down heart failure hospitalisation. One hundred and sixty patients with NYHA class III or IV symptoms , QRS duration <130 msec, and ejection fraction ranging from 25% to 45% in the FIX-HF-5C study were randomised to optimal medical therapy (control, n=86) or CCM (treatment, n=74) for 6 months. The treated cohort with CCM had significant improvement in VO2 max, 6 minute walking time, NYHA functional class and also the composite of death and hart failure hospitalisation was reduced from 11% to 3% (p=0.048). Six minute walking distance improved by more than 30 m in the CCM group.

The device has 3 leads. The atrial lead is positioned in the right atrium as is done in dual chamber pacing, and 2 ventricle screw in leads are placed on the right ventricle septum. The device was programmed to deliver five 1 hour period CCM signals spaced equally throughout the day (24 hours).

It must be noted that heart failure patients who do not qualify for treatment with CRT number in the lakhs; moreover apart from leading miserable lives they are victims of shortened lives. CCM would be useful in this large chunk of heart failure patients. The procedure is simpler than CRT that demands implantation of a lead in the coronary sinus (left ventricle). Interestingly improvement in VO2 and 6 min walking was greater in patients with LV ejection fraction >35% than in those with ejection fraction <35%. Medical therapy (beta blockers and ACE inhibitors) improves quality of life by 4-5 points whereas CCM improves it by 11 points.

Undoubtedly despite the considerable interest this device will generate there are many questions that remain unanswered. Will CCM work in patients with QRS > 130 msec? What is the optimal duration for excitatory signals? Will it work in CRT non-responders? Which sub set of heart failure patients will benefit the most by CCM? Also compared to current research the number of patients studied are minuscule, and the follow up barely for 24 weeks.The exact mechanism responsible to improve cardiac function still remains unclear but the prospect of improving quality of life of severe heart failure by this device is exciting. Large randomised trials confirming safety and efficacy of CCM are urgently needed. There is work already underway to integrate CCM with ICD, which would be useful in patients with ejection fraction <35%.