Sir Roger Bannister etched his name in history by breaking the 4 minute barrier for the mile in Oxford on 6th May 1954, after coming fourth in the Helsinki 1952 Olympics in the 1500 m finals. Sir Roger was a junior doctor then and went on to become a consultant neurologist. His training sessions were light compared to todays standards, but was most probably practicing what is now called high intensity interval training. But when asked what was his proudest achievment he is supposed to have replied his academic contribution as a clinical neurologist. He almost gave up running when he missed a medal in Helsinki. It should be borne in mind that competitive middle distance and long distance running in those years was largely done by Europeans; the Africans must have been definitely running but were not noticed as their participation in track events was extremely thin. But all said and done Sir Roger’s feat will stay in human sporting history for eternity. He ran on primitive earthy sort of a track albeit with pacers, but the last 300 m were tough bet cause of a cross wind. After the race young Roger still gasping for breath said he was “glad” the 4 minute barrier was shattered in Oxford and not in the USA. The current 1500 m record for men stands in the name of Hichem el Guerrrouj of Morocco at 3 min 26 secs set in Rome more than 20 years ago in 1998. The fastest Indian at 1500 m is Jinsen Johnson who has clocked 3:35.24 last month in Berlin. The 1500m record is bound to be broken but Bannisters run will always be a reference point for every middle distance runner on the planet. 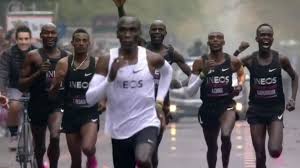 This brings us to another historic moment in distance running, the day Eliud Kipchoge became the first human to run 26.2 miles also called the “marathon” below 2 hours. This is a phenomenal sporting feat that shall be talked about for hundreds of years by everyone attached to sports in general and running in particular. Vienna was the lucky city to witness the extraordinary marathon by Kipchoge. Guess who have been born in Vienna? My favourite is Lisa Meitner, the woman who figured out that when a heavy nuclear particle divides there is always some loss in mass that actually always converts to energy. No wonder Lisa Meitner famously quoted that “You must not blame us scientists for the use which war technicians have put our discoveries.” She was referring to the atom bomb and the Manhattan Project; Lisa Meitner never got a Nobel for physics despite being manifestly deserving. Einstein called her the “German Marie Curie.” Yes the Nobel committee has goofed up many a times. The Nobel prize for literature this year is considered by many close to a disgrace. We however must stick to Kipchoge’s run. The run had numerous adjuncts that a trained athlete will keep in consideration, The route was almost flat and 90% straight. Kipchoge had world class pace setters along with him, who also protected him from any breeze or wind. Vienna was selected for its languid conditions and mild weather. A fancy green laser was constantly directed on the road in front of Kipchoge to enhance running efficiency and importantly he wore the most advanced running Nike shoes ever that have a trampoline effect. The shoes or “Vaporflys’ are reckoned to give almost a 90 seconds advantage to an elite marathon runner.But all these assisting devices cannot mitigate or in any way shadow the accomplishment. Even this record will eventually be broken but Kipchoge made history as he dazzled the world with the first ever sub 2 hour marathon. His time 1:59.40.2 ! This is mythical. I wonder how many Indians fed on 24 X 7 cricket have any idea about the Kenyan’s run.

We need to shift to something quite different but life saving. For decades it was anathema to consider any treatment other than CABG surgery for patients with what is termed “left main” disease. The left main coronary artery divides usually into the left anterior descending and left circumflex arteries, and thus supplies most of the heart muscle. Life is under great threat if the left main coronary artery gets blocked more than 50 %. Coronary bypass surgery had been the only option, earlier randomised trials had clearly shown that surgery was far superior to medical therapy in patients with left main disease. Also percutaneous coronary intervention (PCI) was never considered as an alternative. A paradigm shift has taken place in the last week or so. Two mammoth randomised trials have shown that left main patients do equally well with PCI (ptca and stenting) when compared to CABG surgery. The trials are big by any standards and there follow up as long as 10 years, which is pretty long. The SYNTAX trial (Lancet 394;1325-34 ) has reported that all cause mortality was more or less similar whether patients with left main disease underwent stenting with first generation paclitaxel eluting stents or CABG surgery. In fact after 10 years mortality in the PCI group was 26% versus 28% in the CABG cohort, so actually there were fewer deaths with PCI albeit this was not significant. Also it did not matter if patients suffered diabetes.More than half of the patients in the left main group had distal disease and 50% block was taken as the cut-off. Hence PCI is a suitable alternative to CABG with similar 10 year death rates. Information was available in almost 95% of the 1800 original patients randomised in the SYNTAX trial. There were 705 patients with left mason disease studied in SYNTAX.

The other big trial (N Engl J Med ; published September 28,2019) named EXCEL reported 5 year follow up of 1905 left main disease patients. There was no difference in cardiovascular mortality whether patients were subjected to PCI or CABG ( 5% vs. 4.5%) or in myocardial infarction (10.6% vs. 9.1%). Patients had to have left main block of 70% or if the block was between 50% and 70% they needed to have physiological schema confirmed by stress test to FFR. More than 80% had distal left main disease while stents used were the newer durable polymer everolimus stents. The researchers failed to detect a significant difference in the composite rate of death, stroke, or myocardial infarction at 5 years in patients with low or intermediate complexity (SYNTAX score of 32 or less). As in SYNTAX results were no different if diabetes was present. The message is lucid, PCI is a viable alternative to CABG surgery in patients with left main coronary artery disease. Both PCI and CABG unlike a quadruple ton in a cricket test match or a sub 2 hour marathon save human lives.