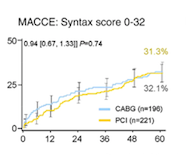 About 5% of patients undergoing coronary angiography are found to have left main coronary artery (LMCA) disease. Left main disease has proved to be lethal because the left main coronary artery supplies 100% of the left ventricle (LV) myocardium in a left dominant system, and 80% of LV myocardium in a right dominant system. Surgical revascularization has been the mainstay of treatment of LMCA disease for long. The SYNTAX trial however demonstrated that patients with LMCA could be managed with paclitaxel eluting stent in patients with low and intermediate coronary artery complexity (SYNTAX score <32). The study showed similar rates of death up to 5 years with percutaneous coronary intervention (PCI) and coronary artery bypass graft surgery (CABG). There were similar rates in major adverse cardiac events at 12 months and at 5 years (Circulation 2014;129:2388-94). 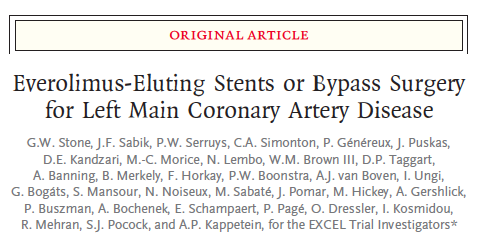 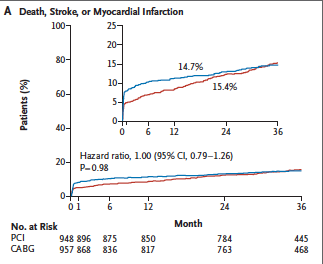 The SYNTAX trial was not primarily powered for comparison of outcomes with LMCA disease, and stenting was done with a first generation drug eluting stent (DES). Stroke occurred more frequently with CABG while revascularization was commoner with PCI. The need for an adequately powered randomized trial assessing newer generation DES and employing imaging techniques to verify extent of lesion was felt by the cardiology community.

The Evaluation of XIENCE versus Coronary Artery Bypass Surgery for Effectiveness of Left Main Revascularization (EXCEL) trial has now been presented at the current TCT conference and simultaneously published (NEJM, October 31,2016). The EXCEL trial included 1905 patients with unprotected left main coronary disease. These patients were considered suitable for either strategy of revascularization by a heart team consisting of a cardiac surgeon and cardiologist. Patients with a SYNTAX score <32 were studied; the mean score being 20. Patients with LM block 70% or greater were revascularized. In the event of a block between 50% and 70%, patients had to undergo non-invasive or invasive testing for ischemia (IVUS or FFR). Almost 80% of patients had IVUS examination during PCI, and all patients received dual antiplatelet treatment before PCI. The use of glycoprotein IIb/IIIa receptors was discouraged. Half of the patients had stable angina. The DES used was XIENCE everolimus eluting cobalt-chromium stent. The mean left ventricle ejection fraction was 57% in both groups. Stent thrombosis was less than graft occlusion (0.7%).

Contemporary surgical techniques were employed and off-pump CABG often used. Mortality stood at only 1% in both CABG and PCI at 30 days. The incidence of primary composite end point (death, stroke or myocardial infarction at 3 years) was similar in both groups (roughly 15%). The rate of stroke was higher in the CABG group while ischemia driven revascularization was significantly more with PCI at the end of 3 years. Importantly although investigators recruited only patients with low or intermediate SYNTAX scores, 24% of patients had a SYNTAX score that was greater.

Periprocedural myocardial infarction was identified when there was a rise in the MB level of creatine kinase to more than 10 times the upper reference limit of the assay, or more than 5 times the upper limit with additional angiographic, electrocardiographic or imaging evidence of infarction.

At 30 days there was a significant 39% reduction in the composite of death, MI, or stroke among PCI patients (p=0.008) , driven mainly by largely by fewer MI’s in the PCI cohort. 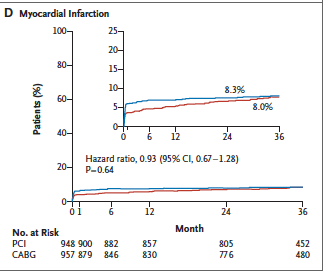 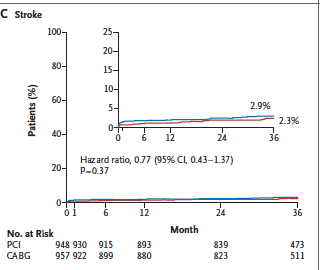 The take home message of the EXCEL trial is that the majority of patients of LMCA can be managed equally well with CABG and PCI (done by expert interventional cardiologists). The prospect of briefer hospitalization, and more rapid recovery makes PCI an attractive choice for LMCA patients. The investigators of the EXCEL trial concluded that PCI with everolimus eluting stents was non-inferior to CABG with respect to the composite of death, stroke, or myocardial infarction at 3 years.

The other much awaited left main trial comparing PCI with CABG too got presented at the TCT meeting and published simultaneously in The Lancet (October 31st,2016). This was the NOBLE trial which had 1201 patients with LMCA disease and the 5 year estimate of major cardiac and cerebrovascular events-a composite of all cause mortality,nonprocedural MI,stroke and any repeat revascularization occurred in 29% of patients assigned to PCI and 19% of patients who underwent CABG, a difference that exceeded non inferiority limit. However at 5 years there was no difference in mortality between the 2 groups. Rates of nonprocedural MI and repeat revascularization were greater in the group of patients undergoing PCI. The NOBLE trial had higher rates of stent thrombosis with the biolimus eluting stents used in that trial, and the fact that they did not define nor include periprocedural MI may have tilted the resulted in favour of CABG.

The NOBLE trial was intended to assess primary endpoint after 2 years of follow up, but a low event rate extended it to 5 years. Almost 10% of patients in the NOBLE study were given first generation drug eluting stents. It is unlikely another randomised trial with adequate power will be conducted in the new future; hence the evidence we have is as good as it can get. Physicians will have to pick patients based on age, comorbidities, coronary lesions for either procedure in patients with LMCA. In selected patients PCI may be a good and even preferred alternative to CABG.