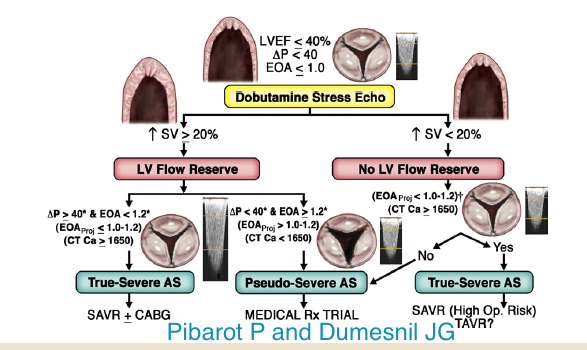 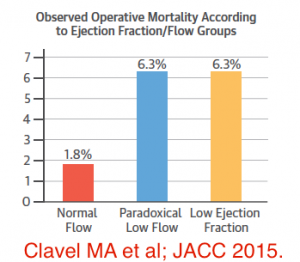 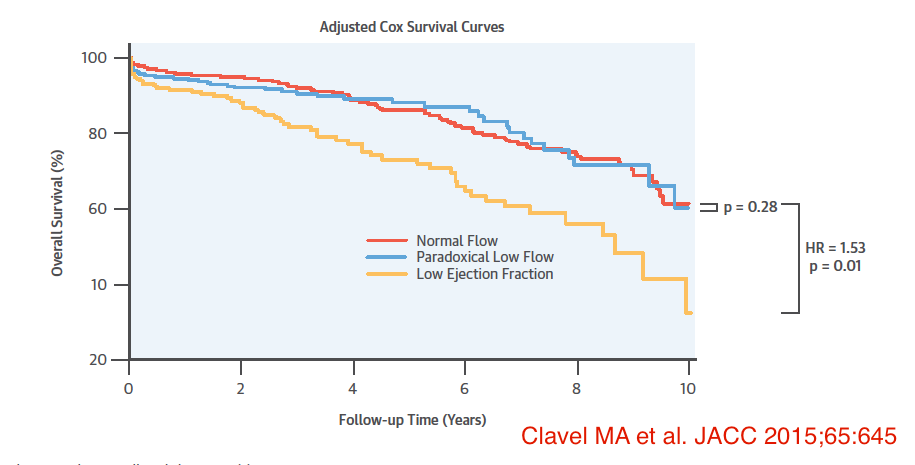 Low flow aortic stenosis (LF) with low left ventricle ejection fraction (LVEF) or normal LVEF continues to perplex physicians and cardiologists alike. The terms are confusing and the management strategies still are to be sorted out. An excellent Canadian paper describes clinical outcomes with aortic valve replacement (AVR) in these subsets of patients in the latest issue of JACC. But first we need to define these groups of patients. Severe valvular aortic stenosis (AS) is defined as aortic effective orifice area (EOA) of less than 1 cm2 or < 0.6 cm2/ m2 if indexed to body surface area, a peak echo velocity jet of more than 4 m/sec, and a mean gradient greater than 40 mm Hg. Surgical intervention is mandatory when a patient with severe AS becomes symptomatic with chest pain, breathlessness or syncope. Aortic valve replacement (AVR) is also recommended for asymptomatic patients with severe AS who would need CABG/ another valve surgery, poor LVEF (< 50%), or a patient who gets symptoms while doing an exercise ECG (TMT) test.

A low flow, low gradient (LF-LG) severe AS accompanied by low LVEF is seen in 5%-10% patients of severe AS. Such patients have a dilated LV due to coronary artery disease. Prognosis is poor with medical treatment but surgical risk is from 6% to 33%. These patients are characterized by an EOA < 1 cm2 or < 0.6 cm2/m2, a transvalvular gradient <40 mm Hg, and low LVEF of < 40%. The low flow is defined as stroke volume index < 35 ml/m2. It is imperative that true severe AS is distinguished from pseudo AS due to a failing LV primarily due to myocardial disease, which is severe enough to prevent opening of aortic valve leaflets. Patients with true AS will benefit with AVR whereas pseudo AS patients will not. A new subset of severe AS has recently emerged. These are the LF-LG patients with normal LVEF (>50%); these “paradoxical” LF-LG severe AS patients constitute about 10%-25%. The “paradoxical LF-LG patients are somewhat similar to patients of heart failure with preserved LVEF; they are elderly females with markedly reduced LV compliance resulting in reduced filling and high LV end diastolic pressures. This brings us to the important subject of identifying the poor LVEF patient with contractile reserve. Patients possessing contractile reserve are capable of increasing the stroke volume by >20% when challenged with low dose (up to 20 mcg/Kg/min) dobutamine stress echocardiography (DSE). Patients with no LV reserve are defined by increase in stroke volume <20% with DSE and carry higher surgery mortality (22%-33%) than those with reserve (5%-8%). Dobutamine stress infusion also helps in distinguishing true AS from pseudo AS in patients with poor LVEF (<40%). In true AS with increased flow there is increase in gradient and the EOA remains same or lessens. The reverse is seen in pseudo AS; increased flow does not change the gradient across the aortic valve and the valve area actually increases. In patients without contractile/flow reserve (<20% increase in stroke volume with DSE) one checks calcium score on multi-detector CT scan. If the score >1650 true severe AS is suspected; if the calcium score <1650 the patient probably has pseudo AS. Low flow (LF) can occur both with reduced (classic) or preserved (paradoxical) LVEF.

The Canadian study in JACC (March 2015) compared surgical outcomes in patients of true AS with low ejection fraction (LEF), paradoxical low flow (PLF) and normal flow (NF). The total population studied were 1,154 patients with severe AS who underwent AVR. Eighteen percent patients had LEF (LVEF <50%); 28% of patients had PLF (LVEF >50%, stroke volume indexed to body surface area (SVI) of < 35 ml/m2; and there were 54% with NF (LVEF >50%, SVI >35 ml/m2). The 30-day mortality was significantly higher in the LEF and PLF groups than in the NF patients (6.3% and 6.3% vs. 1.8%; p < 0.001). Stroke volume index and PLF were independent markers of surgical mortality. The researchers concluded that patients with LEF and PLF have a greater operative risk; patients with LEF had the worst operative outcomes (72% survival at 5 years) while PLF and NF had similar survival rates at 5 years (81% and 85% respectively) post AVR. Interestingly transcatheter AVR outcomes have been observed to depend upon SVI but not LVEF.

Further studies are definitely needed to corroborate the findings of this Canadian study and also to determine whether results with transcatheter AVR could be better than surgical AVR. Low pre-operative LVEF may underscore more advanced myocardial fibrosis and dysfunction and is therefore an independent predictor of 30 day and mid term mortality. A significant fraction of patients with LEF will have irreversible damage of myocardium that prevents recovery of LF function and symptoms following surgery. But patients with PLF (preserved LVEF) despite greater early surgical mortality go on to have similar prognosis with NF patients probably by recovery of LV function. The PARTNER -1 (Placement of Aortic Transcatheter Valves) trial had demonstrated that albeit operative mortality was increased with both surgical and transcatheter AVR in patients with PLF patients, 1-year survival was significantly better with transcatheter AVR.