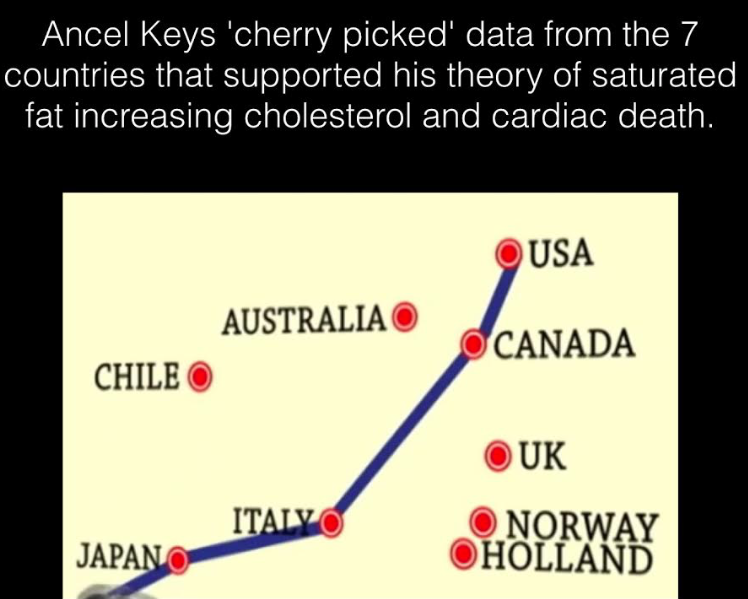 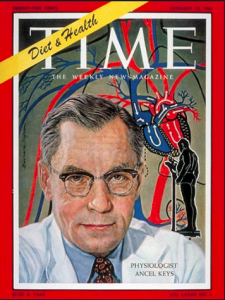 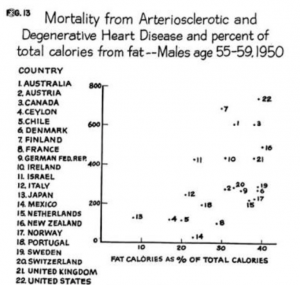 I was taught  from my medical college undergraduate days that eating saturated fat was seeking trouble. Meat (red or white), cheese, butter and egg yolk were, for all practical purposes, proscribed. Repeated guidelines from the American Heart Association (AHA), American College of Cardiology and the World Health Organization were clear that fats in general and saturated fats in particular were to be strictly avoided in order to prevent a heart attack. The message was to reduce fats to less than 30% of total calories consumed in a day with saturated fats kept well below 10%. The entire planet followed these dietary commandments.

The  American Heart Association(AHA) declared way back in 1961 that saturated fats were bad because they increased blood cholesterol that in turn resulted in blockage of coronary arteries and heart attacks. The AHA astonishing conclusion was based upon the hypothesis of a single physiologist, without a shred of hard evidence. Ancel Benjamin Keys, who earned a PHD degree from Cambridge, was that single person. Keys successfully impressed Dr Paul Dudley White , a founder member of the AHA. Paul White was at that point looking after president Dwight Eisenhower who suffered his first heart attack in September 1955. Many middle aged Americans were succumbing to heart attacks in the 1950’s and the situation demanded answers from the health community. Eisenhower had been the Supreme Commander of NATO and before that was the Supreme Commander of the allied forces that had wrenched back Europe from the Germans in World War II. Eisenhower had famously warned the American public in his farewell address about the emerging “military-industrial complex”. President Eisenhower , however, had no clue of the rapidly developing “pharmaceutical –industrial complex.”

Keys was able to launch his Diet Heart Hypothesis because there was little science available in the 1950’s explaining the near epidemic of heart attack in middle-aged Americans. Keys presented his “Seven Countries Study” that displayed a clear association between eating saturated fats and deaths due to heart disease. The seven countries included USA, Japan, Yugoslavia, Netherlands, Italy, Greece, and Finland. There were however substantial flaws in the methodology of his paper.

The biggest flaw was that he cherry picked these 7 countries because they supported his hypothesis, while leaving out 15 countries that did not reveal any association between saturated fat consumption with heart disease mortality. He conveniently ignored Denmark, Sweden, and Norway, which had low deaths from heart attacks despite high consumption of saturated fats. Chile on the other hand had high cardiac mortality despite lesser fat consumption. An unbiased investigator would have realized the flaws in Keys Diet Heart Hypothesis (as they do now) had they been presented with the complete data.

Keys during his research checked food samples for fats in less than 4% of the 12000 participants he studied, and when food was studied it was checked for a single day in the USA and less than a week in Europe. Keys was impressed by the large number of long lived people in the island of Crete. But he tested them during their more than a month long fast in which more than 60% of the population refused to eat meat, butter and cheese. This led Keys to the thoroughly wrong conclusion that a low fat diet was the key to longevity in the people of Crete.

The AHA was impressed enough by the Diet Heart Hypothesis to make it official policy, and by 1977 more than 220 million Americans were being urged by the US government to adhere to a low fat diet. The British too  officially imposed the same diet guidelines  by 1984.

Remarkably, the AHA completely ignored as many as 6 randomized studies including almost 2,500 heart patients, that showed absolutely no difference in mortality between the intervention group (low saturated fat diet) and control group (these continued with their regular eating habits). Both the intervention and control cohorts had 370 deaths. Also despite no women being studied and in the absence of a single primary prevention trial the AHA and the US government laid down the diktat of the low saturated fat diet.

The food industry by then had swung into action. Vegetable oils started being manufactured by the millions of tons. The leading manufacturer became  Procter and Gamble (manufacturers of soap, detergents and shampoo) who began selling cotton seed oil with a vengeance. Proctor and Gamble provided the AHA with its first ever big donation, that in current times amounted to 20 million dollars. The “diet-food-health-industrial complex” became embedded in the public consciousness.

The largest randomized trial assessing affects of low fat diet on heart and cardiovascular disease was the Women’s Health Initiative that followed up 49,000 post menopausal women on a low fat diet (alongside increased fruits, vegetables and grains) for 8 years but failed to show reduction in death, heart attack, stroke or diabetes. 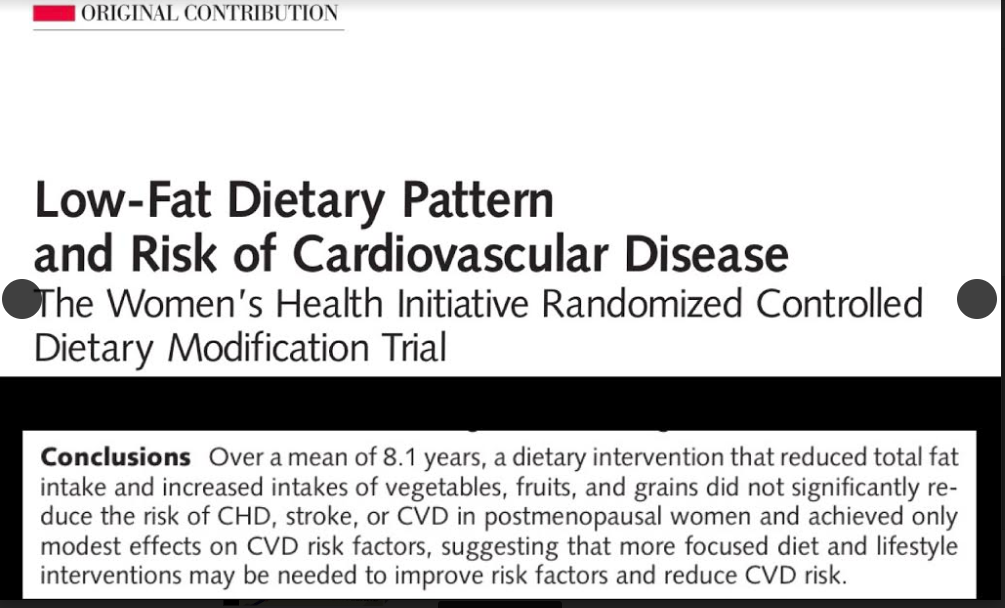 A randomized study was done from 1967 to 1973. Almost 9000 subjects were randomized to diet intervention (saturated fats replaced by a polyunsaturated vegetable oil) and a control group that continued with the regular American diet. Saturated fats were reduced by 50% and the intake of vegetable oil raised by 280%. These subjects were from mental institutions and homes for the elderly. More than 2500 participants were followed for at least 1 year, and autopsy reports were available for about 140 deaths. This trial was named the Minnesota Coronary Experiment but the results never got published. Finally a group of investigators got their  hands on  the raw available data and were dumbstruck to learn that the autopsies revealed that 42% of people in the intervention group had suffered a heart attack as opposed to only 22% in the control group. Both groups were found to have equal amount of atherosclerosis in the coronary arteries. 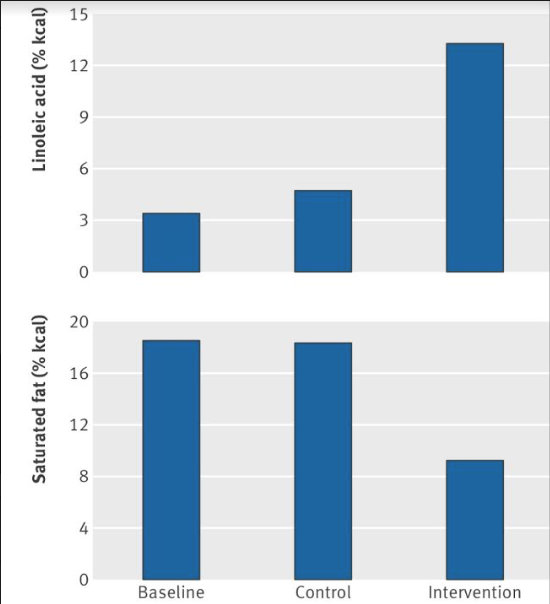 The other major finding was that in spite of 13% reduction in blood cholesterol with vegetable oil diet there was a paradoxical 30% higher mortality in people aged more than 65 years. The investigators explain increased mortality by the hypothesis that probably the lowered cholesterol had the denser LDL particles, which are oxidized more easily and thereby are capable of invading the coronary artery more easily. Guess who was the principal investigator of the Minnesota Coronary Experiment that never got published ?  Dr. Ancel Keys. 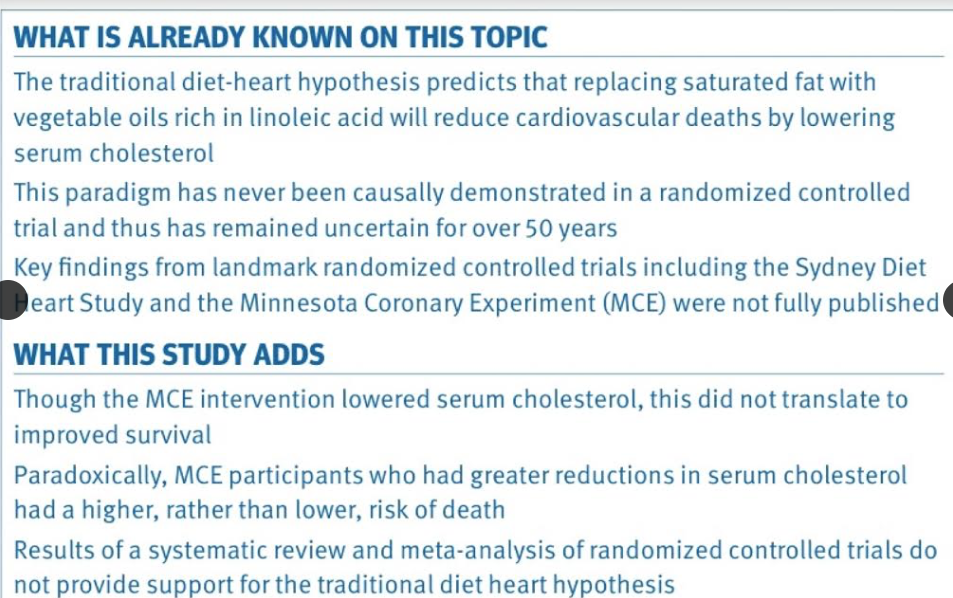 The other distinct probability is that poly-unsaturated vegetable oils produce hundreds of oxidized molecules toxic to human body. Aldehydes are well known to be carcinogenic apart from compromising cognition. The other randomized trial assessing replacement of saturated fats by corn oil (Sydney Diet Heart) too showed increased mortality in the intervention group as compared to the control group. 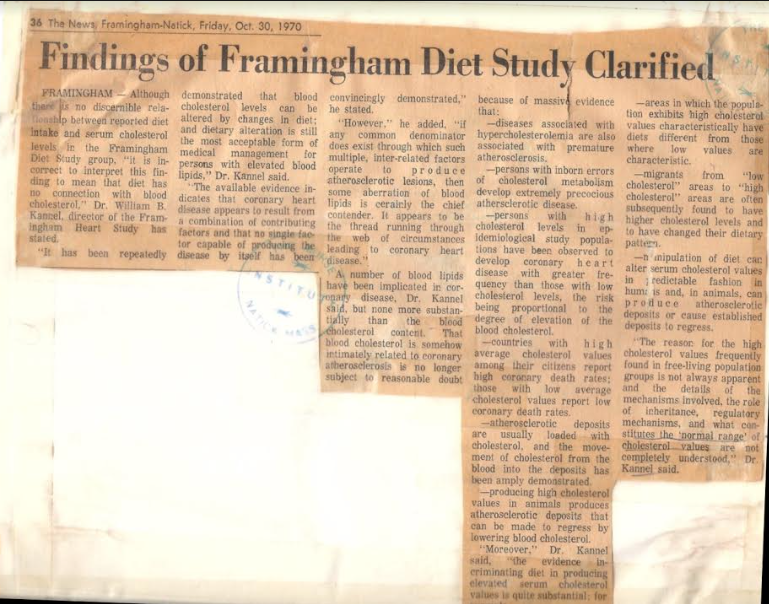 The Framingham study examined fats in diet and development of heart disease in about 5000 inhabitants of Framingham (close to the city of Boston). At the end of the first follow up the investigators were unable to find any correlation between fat intake, cholesterol and heart disease. But like the Minnesota Coronary Experiment the data was deliberately never published. William Kannel the chief investigator made the astounding statement to a local newspaper that albeit the Framinhgam Diet Study failed to provide a correlation of diet and cholesterol it would be wrong to draw the conclusion that there was no influence of diet to cholesterol ! A 30 years follow up of the Framingham Diet study reported that 1 mg% per year reduction in cholesterol was associated with 14% increased cardiovascular mortality, and 11% total mortality ! 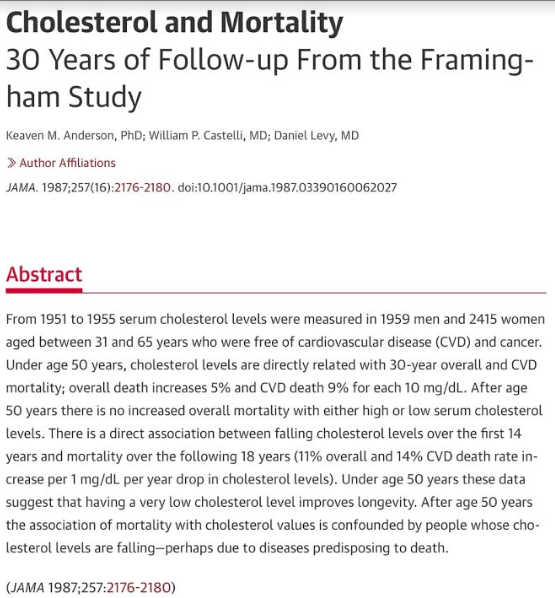 The PURE (Prospective Urban and Rural Epidemiological) survey has been examining cardiovascular risk factors across the world. It has collected some startling data regarding dietary patterns and cardiovascular disease. The results, albeit from 150,000 people are yet to be published, but a video on the (PURE) data was going around on YouTube before it was pulled down. In short, there is no correlation of saturated fats (red meat, white meat, dairy products) with heart disease. Carbohydrates have been found to increase heart disease by the PURE investigators. Moreover, apoB/apo A ratio (the most sensitive cardiac risk factor marker) is increased with carbohydrates and actually reduced by saturated fats. Vegetables and fruits had no effect on apoB/apoA ratio. The PURE trial although very large is an observational study that strictly speaking cannot explain causality.

The “Cholesterol is utterly Bad “ maxim continues to be firmly in place. This is confirmed by the buzz created by the FOURIER trial presented at the American College of Cardiology Meeting held this month. FOURIER was a ‘mega-trial’ that randomized 28,000 cardiac patients to a statin plus evelocumab (PCSK9 inhibitor) versus a statin alone for 2 years. At the end of 2 years LDL cholesterol had plunged to about 30 mg% in the evolucumab group versus about 90 mg % in the statin alone cohort. There was a 1.5 % absolute reduction in stroke or myocardial infarction but NO reduction in mortality. This means that 75 patients will need to be treated for 2 long years to prevent a single heart attack or stroke. The annual cost of evelocumab is $ 14,000. You could probably get a better effect without spending a penny as shown by the Copenhagen study that has demonstrated that slow jogging a mere 10 minutes in a day reduces mortality by as much as 70% . 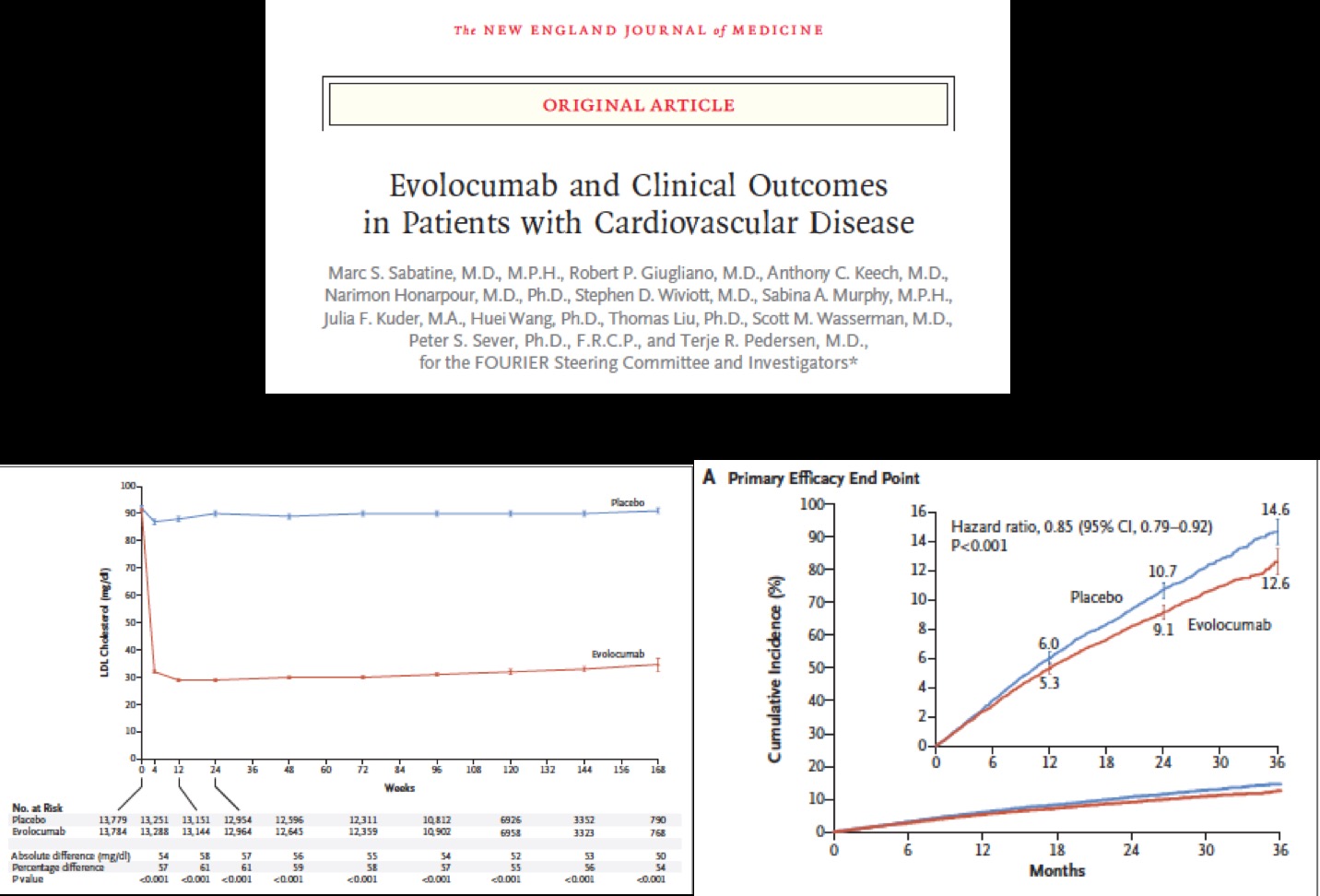 Yes it can be a bit confusing.  Astonishingly the AHA and WHO have promulgated the saturated fat diet heart disease hypothesis as official policy for decades without any evidence. But what advice does one provide to the person on the street? Common sense mandates people should continue eating fruits, vegetables , whole grains and nuts. They should not refrain from consuming meat, butter, cheese and eggs. There is little or no evidence that eating a diet of saturated fats , reasonable amount of proteins and about carbohydrates will trigger a heart attack. On the contrary, evidence has emerged that increasing carbohydrates to 55% or more can actually be harmful to the heart. The current epidemic of obesity and type 2 diabetes are most certainly due to increased carbohydrate intake replacing fats in diet.

The reader would do well to read the book “The Big Fat Surprise” but Nina Teizolch. But gulping down kilos of red meat is not the take home message of this piece. Heart attacks and strokes are not caused only by a bad diet. There are other risk factors at play, which need to addressed too.  One could  eat a “perfect diet” but still be undone by ignoring equally important if not weightier risk factors.