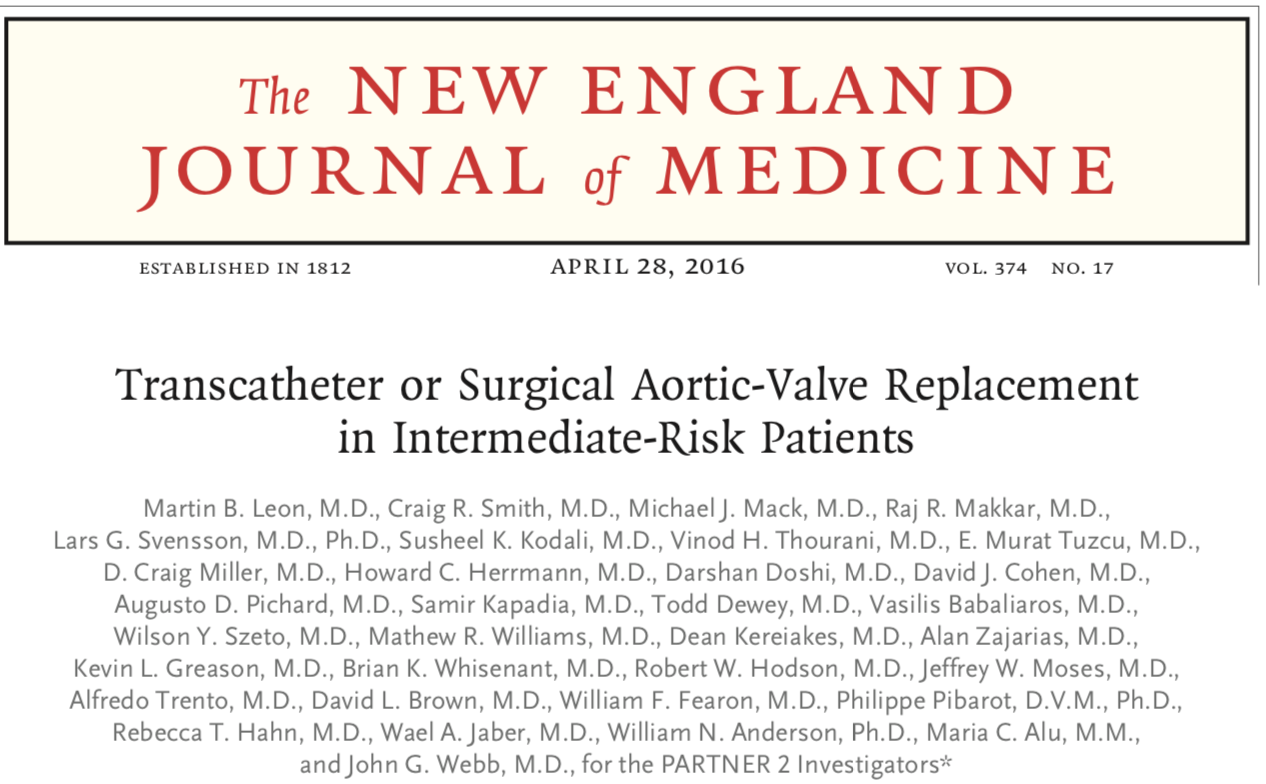 Against the background that transcathere aortic valve replacement (TAVR) carries similar risk of mortality as compared to surgical valve replacement (SAVR) in patients of severe aortic stenosis with a high risk score, the PARTNER 2 trial randomized a little more than 2000 patients of severe symptomatic aortic stenosis with intermediate risk to TAVR and SAVR. Intermediate risk was an STS score between 4% and 8%. About 75% of patients in the TAVR group underwent the procedure by the femoral access route while 25% had TAVR done by thoracic access.

At 2 years the primary endpoint of death and disabling stroke was similar in both groups. Surgical aortic valve replacement was associated with less major vascular complications and paravalvular aortic regurgitation. TAVR on the other hand was associated with fewer episodes of atrial fibrillation, lesser need for blood transfusion and kidney replacement therapy. At 2 years the Kaplan Meier curve for death and stroke was about 20% in both groups. There were fewer deaths and strokes with femoral access TAVR as compared to SAVR, while death and stroke were the same when thoracic access TAVR was done as compared to SAVR. TAVR resulted in larger aortic valve areas. Half of the patients in PARTNER 2 trial were females, the average age was 81 years, and the mean STS score was 5.8.

The researchers pointed out certain limitations. First there was a higher rate of withdrawal of patients from the surgical cohort. The valve used in Partner 2 was the Sapien XT which has now been replaced by the Sapien 3 balloon catheter device. Durability of the bio prosthetic valve is still to be ascertained over 10 years but at 5 years the TAVR valve has been found to be sturdy without signs of degeneration. Also multislice computed tomography imaging was not used consistently to assess aortic annulus dimension.

The other large randomised trial comparing TAVR with SAVR was SURTAVI that included more than 1700 patients of severe symptomatic aortic stenosis with intermediate surgical risk. The mean STS score was 4.5. Severe aortic valvular stenosis was defined as valve area of 1 cm2 or less or valve area index of 0.6 cm2/ m2 and mean gradient greater than 40 mm Hg or velocity across aortic valve more than 4 m/ second. At 2 years the primary end point of death and stroke was similar in TAVR and SAVR , about 14% in both groups. The TAVR valve employers was the Core-Valve bioprosthesis. Surgery was associated with higher incidence of acute kidney injury,blood transfusion, and atrial fibrillation. Permanent pacemaker implantation and paravalvular regurgitation were greater in the TAVR group. 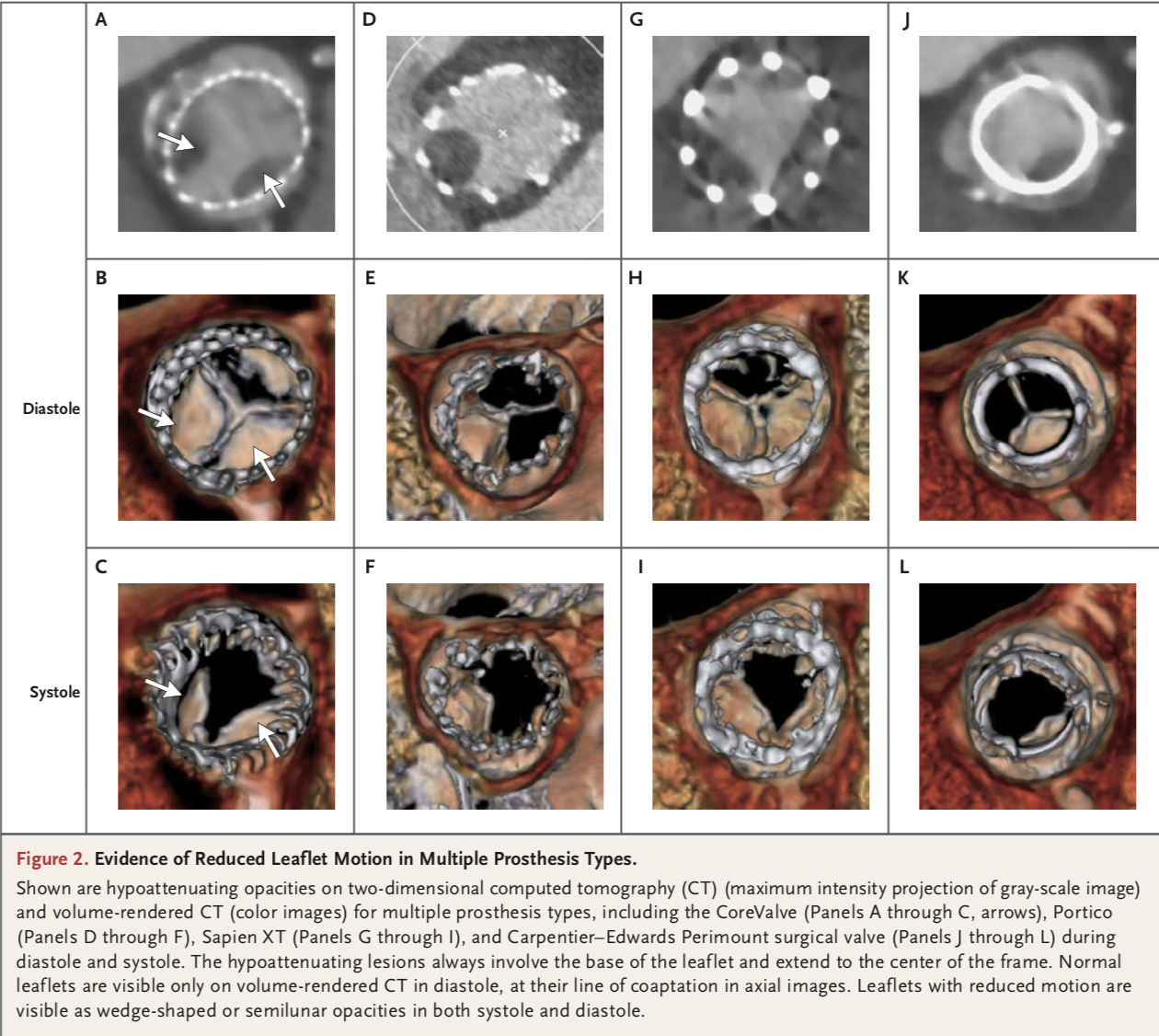 TAVR has emerged as an alternative to surgical valve replacement in patients of severe aortic stenosis with high or intermediate risk. There has been a steady improvement in the hardware employed in TAVR with development of devices having smaller profiles that can be deployed more easily. It is tempting now to expand the indication for TAVR to patients with low risk for surgical complications. This will be a challenge however because of recent reports of subclinical leaflet thrombosis following TAVR. Reduced leaflet motion was spotted in bioprosthetic valves by four dimensional CT scan. The incidence of thrombus was reduced by anticoagulation. Incidence was high as 40% in a clinical trial and 13% in 2 registries. Restoration of leaflet motion was seen by anticoagulation on follow up CT in most patients. There was no significant difference in rates of stroke or TIA in patients with and without thrombus. Thrombi were seen in both Sapien XT and CoreValve, and also in surgical valves. The researchers are unable to define the clinical implications of these thrombi. The thrombi did not alter gradient across the valve and were undetected by transthoracic echocardiography. The findings are limited by absence of pathological confirmation. Thrombi were more prevalent in patients with no or sub therapeutic anticoagulation. The thrombi were successfully treated with anticoagulation suggesting that little or no levels of anticoagulation account thrombus formation with subsequent reduced leaflet motion . The thrombi may be detected by transesophageal echocardiography. Dual anti platelet treatment seem to be ineffective in preventing leaflet thrombi. Altered flow patterns following TAVR may lead to stasis and hence thrombi. Surgical implantation of valves require resection of all tissue in and around the aortic annulus. Thrombi formation may be multifactorial, design and type of bioprosthetic valve plus technique of deployment must also be playing a role. It would be premature to lay down a protocol of anticoagulation to prevent subclinical thrombi because of unclear clinical significance and bleeding risks associated with elderly patients undergoing TAVR. Antithrombotic strategies and clinical ramifications of sub clinical post TAVR leaflet thrombosis will need to confirmed in large randomised trials.

The other interesting report published this week is the phenomenon of “ delayed coronary obstructionl” or DCO following TAVR. DCO is an uncommon complication of TAVR. JACC has published restrospective data from more than 17000 TAVR procedures; there were 38 cases of DCO giving an incidence of 0.22%. DCO was commoner with self expanding valves and in valve in valve procedures. 48% of DCO cases occurred within 24 hours and 16% in the next 6 days. The remaining 36% of DCO occurred after 2 months. The most common presentation was cardiac arrest (32%) followed by ST segment elevation myocardial infarction (24%). The left coronary artery ostium was blocked in more than 90% cases. Almost 50% patients died following DCO. The authors conclude that clinicians should be aware of DCO and should be prepared to do a check angiogram and subsequent stenting.

Three fourths of DCO occurred in females. Leaflet obstruction was confirmed in at least one patient. People with prior CABG may have relative protection against DCO but low risk patients of severe aortic stenosis may be more vulnerable because of longer life span. There seem to be 2 pathogenetic mechanisms. The first group of DCO occurring in first 7 days could be due to an expanding valve, thrombosis o obstruction by displacement of calcium. Late DCO may be due to flow turbulence sparking fibrosis or inflammation leading endotheliasation and obstruction. Early cases of DCO present as cardiac arrest or ST segment elevation myocardial infarction, while late DCO present as angina. There seems to be no preventive strategy right now to tackle DCO. There is the possibility that short term anticoagulation may help but there is no confirmation. Women seem to be more affected; maybe because of smaller annulus size.

A complex technique called BASILICA (bioprosthetic or native valve scallop intentional laceration to prevent coronary artery obstruction), in which pericardial leaflets are lacerated using catheter electrosurgery.BASILICA has been used in a pioneering study involving only 7 patients and it will be some time before it becomes standard procedure.

A small underpowered trial conducted in Denmark and Sweden (NOTION or Nordic Aortic Intervention Trial) ) has reported results at 5 years in patients randomised to TAVR and SAVR. Interestingly these patients were in the low risk category. Most patients had an STS score below 4%, the average age was 79 years. At 5 years both groups had a mortality of 28%; the lowest mortality figures reported by any trial at 5 years. The TAVR group however had higher rates of pacemaker implantation and paravalvular aortic regurgitation. Primary outcome (mortality, MI or stroke) at 5 years too was similar in both groups (37% app.). Increased implantation of pacemaker in the TAVR group was associated with increased mortality. Paravalvular leak was not associated with greater mortality (53% of TAVR had mild regurgitation 5 years). Pacemaker was require in 42% of patients in TAVR.

There are therefore now data suggesting that TAVR in patients of severe aortic stenosis with low surgical risk provides clinical equivalence to surgical aortic valve replacement. Large randomised trials are needed to confirm parity in clinical outcomes. But clinicians should be aware of the phenomenon of subclinical valve thrombosis and also the dreaded complication of delayed coronary obstruction. Crucially, despite considerable silent cerebral infection been documented by MRI during TVR or soon after (50% to 80%), clinical ramifications of subclinical rhombus remain to defined. Moreover it is not clear what is the best preventive measure. Also albeit DCO is uncommon, there are no clear recommendations on prevention or management. It is obvious that that the 2 phenomena are kept in mind when expanding TAVR to low risk patients of severe aortic stenosis.