It happened more than a decade ago but even now seems odd that as thousands of Tamil Sri Lankans were being slaughtered during the last days of the Sri Lankan civil war no concern was expressed by any Hindu organisation within our borders. More 100000 civilians lost their lives courtesy the Seri Lankan forces is the conservative estimate provided by the UN and observers. It got queerer when Prabkakaran’s only 12 year old child was shot dead by Sri Lankan forces after providing him a snack a couple of hours before; not a whisper from our humble God fearing folks; after all is fair in love and war, including pumping 5 bullets in a 12 year old form point blank range. Maybe the Scriptures prescribe cold blooded killing of the children of your enemies. Conceivably the little boy and his mother had followed the tenets of the Roman Catholic faith. His mother too was cut down in cold blood. So was his sister.I wonder what spin our television and You tube savvy Gurus provided then or will deliver now, regarding the killing of the children. The Upanishads or the Gita do NOT endorse the murder of innocent children or women. Astonishingly and appallingly despite being the largest cohort of refugees within in our shores , Tamils who fled the worst possible genocidal onslaught in living memory are not included in the CAA. To add to their infinite misery the Rajapaksa are back in complete control of Sri Lanka.To many the CAA is fair game.

Let us recollect the high profile murder of of one of Sri Lanka’s most distinguished journalists, Lasantha Wickrematunge in January 2009. Mr. Wickrematunga wrote a remarkable editorial that was published after he was killed.”In the name of patriotism you have trampled on human rights, nurtured unbridled corruption and squandered public money like no other president before you,” Mr Wickrematunge’s editorial said to Percy Mahendra Rajapaksa. It was not uncommon for dissenting voices to be harassed , intimidated or even murdered in Sri Lanka as recently as 10 years ago. “When finally I am killed, it will be the government that kills me,” he wrote, in a more than 2000 word edit republished by the Guardian and New Yorker and attracted international scrutiny of the harassment faced by Sri Lankan journalists. Alas Lasantha who presciently wrote “I hope my murder will be not seen as defeat of freedom but an inspiration”, seems largely ignored by the Indian media. As far as I am concerned absolute and utmost respect to one of the bravest journalists the world has ever known. I would urge you, no beseech you to read Lasantha Wickremtunge’s edit ( freely available online). It is a must read in today’s times. His is a biopic worth making. His is a name worthy of being taught to every school going child on the planet.

“But there is a calling that is yet above high office, fame, lucre and security. It is the call of conscience. Our commitment is to see Sri Lanka as a transparent, secular, liberal democracy.” We need Lasantha right now and right here.

Now to an equally important subject. The commonest valvular disease in the Western world is aortic stenosis. All cardiac societies agree that severe aortic valve stenosis can only be treated by intervention that is surgical aortic valve replacement (SAVR) or trans catheter aortic valve replacement (TAVR). The intervention however should be done only if the stenosis has become severe and the person concerned is symptomatic. Symptoms consist of chest pain, shortness of breath or syncope ( giddy spell). The aortic valve is considered severe when its are is less than 1cm2 or the flow across the aortic valve exceeds 4m/sec or the mean gradient is more than 40 mm Hg. A small randomised trial from Korea published this week makes the case of intervening in patients who have not yet become symptomatic. This trial randomised 145 patients with very severe aortic stenosis ( defined as aortic valve area equal or less than 0.75cm2 with either an aortic jet velocity of attest 4.5 m/s or a mean gradient of 50 mm Hg), to early surgery or conservative care as currently recommended. The primary end point was a composite of surgical mortality (death due to surgery upto 30 days) or death from cardiovascular causes. The followup extended to 8 years. The primary endpoint was significantly greater in the conservative cohort, it was 1% at 4 years and 1% at 8 years n the early surgery group versus 6% at 4 years and 26% at 8 years in the conservative group. Sudden death had occurred in 4% at 4 years and 14% at 8 years in the conservative group. The researchers have concluded that the composite of operative mortality or cardiovascular deaths are significantly lower when patients with very severe aortic stenosis are treated by surgery even though they are asymptomatic ( N Engl J Med 2020;382:111-9).

The study will however not change current guidelines because a few caveats shall have to be kept in mind. Firstly only 145 patients have been studied, and all of them belong to the Korean peninsula. The average age of these patients is relatively young at only 63-65 years. Most patients undergoing TAVR are nearly 2 decades older; and being older carry the burden of other co morbidities or illness with them. None of the TAVR randomised trials have included patients with bicuspid valve, while the Korean paper has more than half the patients suffering from bicuspid aortic valves (54% in the conservative group and 67% in the early surgery group). 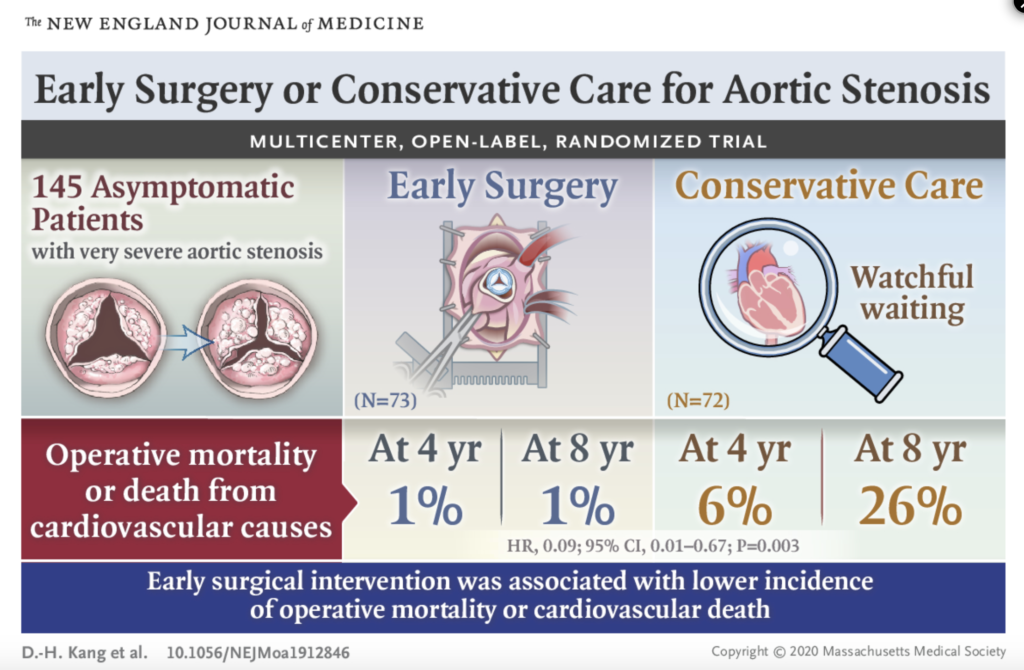 Randomised trials in patients with severe symptomatic aortic valve stenosis undergoing TAVR have reported equal if not better results in patients with low surgical risk, we therefore our moving into an area where TAVR can be considered a suitable alternative in almost all patients with symptomatic severe aortic stenosis. The age of the patient best suited for TAVR is still to be ascertained, because the life of the TAVR valve (tissue valve) is not as yet clear. TAVR is hence best suited in patients who have crossed their mid seventies because of the durability question; consequently TAVR in a patient in her sixties would be questionable.

The editorial on the Korean paper highlights the fact that 22% of patients in the conservative group never underwent surgery. So how does one best tease out asymptomatic patients with very severe aortic stenosis for surgery? That may be clarified by completion of ongoing large TAVR randomised trials such as “AVATAR”, “ESTIMATE”, and “EARLY TAVR”, which are trials comparing TAVR in asymptomatic severe aortic stenosis versus watchful waiting.