A few months ago the ORBITA trial (Lancet 2018;391:31-40) reported that there was no significant increase in exercise time when PCI was compared to a sham PCI procedure in stable angina patients with a single artery that was blocked significantly. The difference was only an insignificant 16.6 seconds at 6 weeks follow up. There were loud cries of changing guidelines in the treatment of stable angina following the presentation of ORBITA data. Medical therapy when prescribed optimally was as good as an invasive procedure in patients with stable angina. The study included only 220 patients and had a brief follow up of only 6 weeks.

The FAME 2 trial ( New Engl J Med 22nd May 2018) published a fortnight ago has tried to bat for the interventional cardiologists of the world. The FAME 2 trial recruited 888 patients of stable angina with at least on coronary artery having a block greater than 50%. These patients were subjected to assessment of physiological block with FFR ; with an FFR less than 0.80 taken as a significant block. The 888 patients were then randomised to PCI with optimal medical therapy or medical therapy alone. At 5 years follow up there was no difference in death or myocardial infarction. There was however a significant reduction in unplanned hospitalisation for chest pain with PCI. Second and this generation stents were used for PCI, and anti platelet therapy costed of aspirin and clopidogrel or a P2Y12 inhibitor.

By 5 years there were astonishingly identical number of deaths and ST elevation myocardial infarction in both groups. The number of deaths was 23 and number of STEMI was 7. The researchers concede that there were some limitations in their study. The trial was not blinded, recruitment was stopped prematurely by the safety and monitoring board, and there is always the possibility lesions less than 50% could be physiologically significant by FFR. Urgent revascularisation occurred in 21% of medically treated patients as opposed to only 6% in the PCI cohort. The conclusion was that in patients with stable angina, an initial FFR guided PCI strategy resulted in significantly lesser urgent revascularisation at 5 years.

Interventional cardiologists shall be spotted snorting out we told you so. An open artery is bound to behave lots better than a compromised artery over time. After all a substudy of ORBITA did show that despite not increasing exercise time wall stress ischemia by echocardiography was bettered significantly with PCI as compared to medical therapy.

But the point that I wish to make is that we still do not have a randomised trial demonstrating lowering of death with PCI in patients with stable angina. Moreover neither is there any difference in incidence of myocardial infarction with PCI. Urgent revascularisation was significantly reduced with PCI in FAME 2, but this is a soft endpoint susceptible to prejudice. Remember FAME 2 was unblinded, this means both patient and physician knew what was going on. Crucially a little more than 50% patients from the medical group crossed over to PCI. Or put in another way patients or their physicians felt that medical treatment was not working in half of the patients in the medical group. Strangely almost 6% of patients in the PCI group too needed urgent revascularisation but details of these patients are not provided. Urgent revascularisation is defined as unplanned hospitalisation for symptoms. Significantly patients with 50% or greater block were recruited for FAME 2. 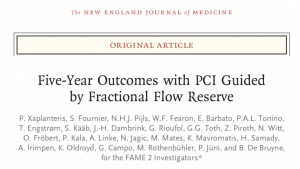 Medical therapy in FAME 2 was quite contemporary and comprehensive. More than 95% patients were on aspirin or atorvastatin ( 20 mg to 80 mg), 90% of patients were on a beta blocker, 80% patients were on an ACE inhibitor or an ARB, while 33% were on a calcium blocker. I wonder what will be the response of statin makers because clearly statin has failed miserably in patients with stable angina having a block greater than just 50%. I have always been sceptical of statins in primary prevention but FAME 2 demonstrates that symptoms necessitating hospitalisation (and PCI in same admission) cannot be prevented with atorvastatin administered to keep LDL cholesterol below 80 mg%. Statins are considered to arrest the growth of a coronary plaque and more importantly stabilise the coronary place and thereby thwarting an acute coronary syndrome situation.

The take home message from COURAGE was that initial therapy in patients with stable angina should be drugs, and if this failed PCI out to be the next step. FAME 2 suggests that stable angina patients with FFR proven coronary block should undergo PCI right away instead of waiting for medical treatment to flounder. But physicians must note the alarming failure of statins in secondary prevention too, even when accompanied with a beta blocker, ACE inhibitor and a calcium channel blocker. I wonder what will be the reaction of the statin industry to FAME 2. Should we carry on making patients of stable angina with significant coronary artery disease pop in statins every night knowing very well there is always the chance of developing a myopathy, cognitive dissonance or even diabetes.

One fifth of patients on a statin required urgent revascularisation over a 5 year follow up; thats a pretty bad batting average for statins by any standards ! The other possibility could be bias by patient or   physician.