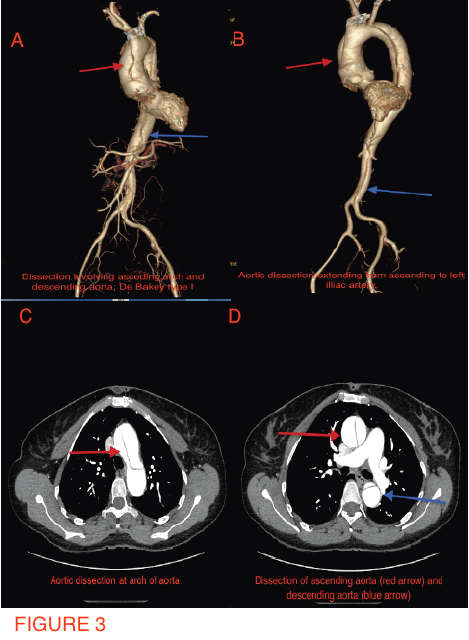 A 49-year-old woman suffering from hypertension for the past 5 years, and who had undergone mitral valve replacement with a bio-prosthetic valve a decade ago for rheumatic mitral regurgitation, was admitted for sudden onset severe tearing pain in her throat, followed by pain in the inter-scapular region, and then heaviness over the chest in an outside hospital 6 weeks ago. She was managed then with analgesics as the ECG displayed no changes and her cardiac biomarkers were normal. Invasive coronary angiography done during the current admission for intermittent pain in her left shoulder demonstrated normal coronary arteries (Figures 1-2). She underwent a multi-detector 256 slice computed tomography contrast aortography (CTA) that revealed extensive aortic dissection involving the ascending aorta (Figures 3A and 3B, red arrow), the arch (Figures 3A and 3C, red arrow) and descending aorta up to her left iliac artery (Figures 3A and 3B, red arrow, and Figure 3D, blue arrow); cross sectional CTA showed dissection of her ascending (Figure 3D, red arrow) and descending aorta (Fig 3D blue arrow). The aortic root and ascending aorta were dilated measuring 4.6 X 5.7 cm in AP dimensions. There was no sign of an intramural hematoma.

Transthoracic echocardiography demonstrated the dissection flap in both parasternal and short axis views (Figures 4A and 4B, video 2).

The role of surgical management in chronic DeBakey Type I aortic dissection, in patients who have already undergone open-heart surgery, those over 80 years, and in patients with neurological complications remains to be established.

Mortality in untreated DeBakey type I aortic dissection exceeds 70% at one week as it ranges at 1% per hour; almost 50% are dead by 48 hours and therefore emergency aortic repair continues to be standard therapy for acute type I dissection. Death rates are lower albeit substantial in type III distal aortic dissection extending from the left subclavian artery; minimum mortality of 10% at 30 days (5-6).

The first reported case of acute aortic dissection was that of late King George II of England who died in 1760 of pericardial tamponade because of acute ascending aortic dissection, which was confirmed by his personal physician whose task it was to open and embalm the royal corpse; but the phrase “dissecting aneurysm” got to be coined much later in 1819 by Rene Laennec, the inventor of the stethoscope. DeBakey, Cooley and Creech performed the first successful surgical repair of aortic dissection in 1954 (7). In hospital mortality of surgically managed patients was 27% in the International Registry of Acute Aortic Dissection (IRAD) database as opposed to 56% managed medically. Interestingly one-year survival in the surgically treated cohort was 96% versus 89% in the medical group. At the end of 3 years, 69% of medically treated patients survived compared to 89% after surgery (8-9).

The optimal management of patients presenting late after symptom onset remains to be defined. A prospective single institution study involving 195 patients with type A dissection that comparing immediate surgical repair with wait and watch surgery policy reported similar long-term survival; but the immediate surgery cohort showed a trend toward 30 day mortality (16.5% versus 8.7%, p=0.1031). Of the 92 patients in the wait and watch policy, 53 (57.6%) did eventually undergo operative repair 8.2 days after onset of symptoms. More than 40% of patients of type A aortic dissection managed medically survived 42.8 months of follow-up. The data suggests that dissections stabilize if the patient survives the initial catastrophe; medical management in such patients with advanced age or significant comorbid conditions may result in acceptable outcomes than previously considered. The sickest patients usually succumb before hospital admission. It may be underscored that non-operative treatment for late presenting cases is proscribed, and whenever felt essential for obviating mortality or better clinical outcomes surgical repair is treatment of choice (10).

Delays in diagnosis of acute aortic dissection, as per IRAD, not uncommonly occur in female patients, atypical symptoms not including abrupt pain located in chest or back, and absence of pulse deficit or hypotension, and in patients presenting to non-tertiary hospitals (9).

Surgical results in octogenarians reported by the Sienna group suggest that patients in their 80’s be spared the trauma and tragic outcomes of the procedure. Twenty of 24 consecutive patients who underwent surgery for acute aortic dissection died while still in hospital and the remaining 4 did not live for more than 6 months (11). In an analysis of 936 patients in IRAD, there were only 63 patients over 80 years old and hence mortality benefit from surgery could not be established (12). Michael DeBakey it must be noted survived surgery for proximal aortic dissection at the ripe age of 97 years (7)

The European Society of Cardiology recommends multidetector computed tomography angiography as the first line of investigation in patients suspected to be suffering from aortic dissection. Multidetector computed tomography angiography carries a sensitivity of 100%, specificity of 98% and diagnostic odds ratio of 6.5. Transthoracic echocardiography in patients with shock has been shown to have a sensitivity of 78.3% and 83% specificity for diagnosing proximal aortic dissection; echocardiography can however not be suitably employed to confirm dissection of the descending aorta in most patients (1). Trans esophageal echocardiography (TEE) on the other hand can visualize the entire aorta with sensitivity and specificity of 98% and 95% respectively; TEE has the advantage of being performed at the bedside (1). The IRAD database reported the first modality of choice as computed tomography in 63%, TEE in 32%, invasive aortography in 4% and MRI in only 1% (8).

The first IRAD reported on 450 patients of which two thirds were male with mean age of 63.1 years, and proximal aortic dissection accounted for 61.2% of cases. The most common risk factor was hypertension (72%), 31% had known atherosclerosis, and history of previous cardiac surgery was present in 17.9% patients. Marfan syndrome and iatrogenic dissection were seen in 4.9% and 4.3% respectively. Cocaine use was uncommon (0.5%), affected predominantly the descending aorta and was observed more commonly in young black hypertensive individuals. The in-hospital mortality in proximal dissection undergoing surgery was 26.6% while medically treated patients had mortality of 55.9%.

Intramural hematoma (IMH) was present in 5-20% of patients with acute aortic syndrome in the IRAD database. Progression to classic dissection occurred in 28-47% of patients with risk of rupture in 20-45% while regression was seen in 10% patients. The mortality rates with IMH have been higher in European and American series than in Asian patients (8).

This middle-aged hypertensive woman who suffered dissection of almost her entire aorta but could not be diagnosed in a non-tertiary hospital has now survived for more than 4 months on tight medical treatment. The dissection was confirmed by multidetector computed tomography angiography and transthoracic echocardiography. This report without in any way advocating non-surgical treatment demonstrates the fact that patients who survive the initial post dissection period and refuse consent for surgery or are denied surgery because of comorbidity are left only with the choice of medical management.