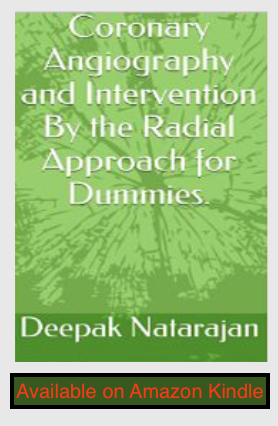 The RIVAL study had randomized 7021 patients of acute coronary syndrome (mean age 62 years; 14% more than 75; 28% ST-segment elevation myocardial infarction-STEMI) to either radial or femoral access for coronary angiography and planned PCI between 2006 and 2010. It was seen that at the end of 30 days, the rate of the primary outcome (a composite of death, myocardial infarction, stroke and major bleeding unrelated to coronary artery bypass graft surgery) was the same in both groups. Large hematomas and pseudo aneurysms needing closure occurred significantly less in the radial group than in the femoral cohort (1.2% vs. 3.0% and 0.2% vs. 0.7% respectively). Cross over rates from radial to femoral approach due to vessel spasm or tortuosity was greater than femoral to radial (7% vs. 0.9%) and fluoroscopy was significantly longer in the radial than in the femoral group (9.8 vs. 8 minutes, p< 0.001). It was concluded that albeit both approaches had similar clinical outcomes the radial approach resulted in less local complications, less bleeding and earlier ambulation. The RIVAL data was published in 2011.

Now in March 2015, Lancet has published the randomized multicenter superiority MATRIX trial that has also compared radial to femoral access in acute coronary syndrome patients. This is the largest such trial comparing access for coronary angiography and subsequent PCI; it randomly assigned 8404 patients with acute coronary syndrome (with or without STEMI) to radial (41970 or femoral (4207) access; fewer patients in the radial group had major adverse cardiovascular events (death, myocardial infarction or stroke; 8.8% vs. 10.3%) compared to femoral access; statistically insignificant. The net adverse clinical events however were significantly lesser with the radial approach , 9.8% vs. 11.7%; p=0.009); the difference was driven largely  by lesser major bleeding and all-cause mortality (1.6% vs. 2.2%; p <0.05). There was a significant relative 33% reduction in major bleeding , and significant 28% lowering in all cause mortality.

Almost half of the patients in the MATRIX trial had STEMI; 80% of the patients underwent PCI subsequent to angiography; and included operators who did at least 75 trans-radial procedures in the past year.

It would be worthwhile mentioning the STEMI-RADIAL trial (published in 2014 in JACC) had recorded that the radial approach in patients with STEMI was associated with significantly lower incidence of major bleeding, access site complications, and superior net clinical benefit. The STEMI-RADIAL was a randomized multicenter trial that included 707 STEMI patients within 12 hours of chest pain onset. The primary endpoint was the cumulative incidence of major bleeding and vascular site complications at 30 days. Duration of stay in the intensive care unit was also significantly reduced with the radial approach .The authors went on to conclude that radial access should be the first approach in primary PCI provided the operator was adequately trained in the technique. The European Society of Cardiology 2012 guidelines for STEMI prefer the radial approach to femoral access in primary PCI if performed by an experienced operator (recommendation class II a).

‘Coronary Angiography and Intervention by the Radial Approach for Dummies’ is a small, richly illustrated, simple to-read book on the radial approach, which is available on Amazon Kindle.