A 77 year old hypertensive male who had sustained an old inferior myocardial infarction 24 years ago was admitted directly into the coronary intensive care unit with 5 days of severe recurring chest pain not responding to sublingual nitroglycerin. Soon after admission he developed severe prolonged chest pain not responding to i/v morphine and that was accompanied by marked EKG changes of new onset left bundle branch block and ST segment depression of 2 to 4 mms in leads 1, aVL,V2 to V6. There was also discordant ST elevation of 3mm in lead 3. 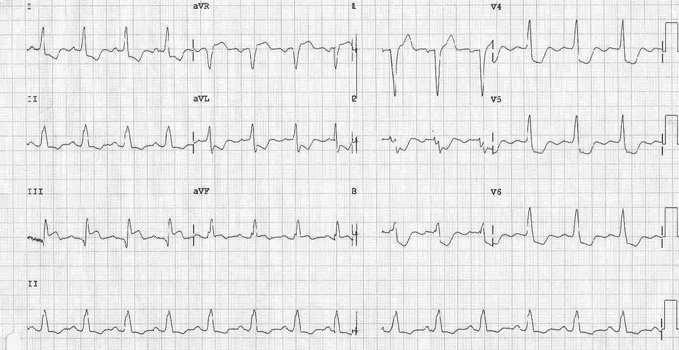 He rapidly became breathless with widespread crepitations in both lungs and began to lose systemic pressure. He was therefore quickly wheeled to the cath lab on dopamine support.

In view of the ongoing acute anterior myocardial infarction (MI) and highly unstable hemodynamics (he was by then in frank pulmonary edema with systemic systolic pressure on dopamine of 80 to 90mmHg), the left coronary artery was engaged with a 6 Fr EBU left guiding catheter; and a 0.014″ floppy guidewire was negotiated across the LM and LAD stenoses. The LAD was predilated with a 2.0x12mm balloon at 14atm. 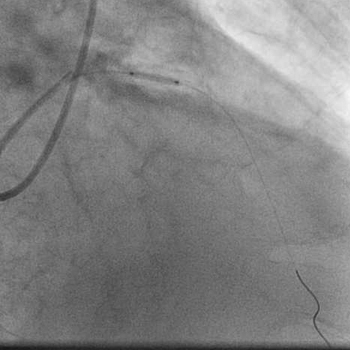 A 3.5x18mm cobalt chromium bare metal was next quickly deployed at 20atm in the LAD lesion. 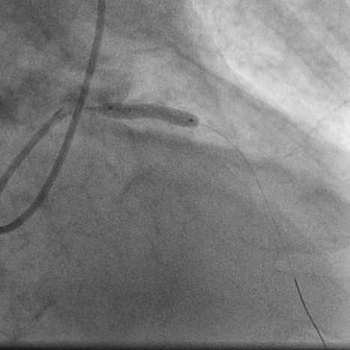 Angiogrpahy revealed TIMI 3 flow in the LAD artery with no residual stenosis or dissection. 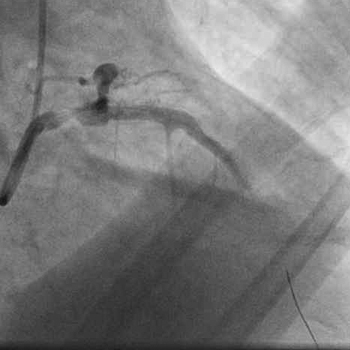 The same balloon was withdrawn into the left main and inflated at 18atm. 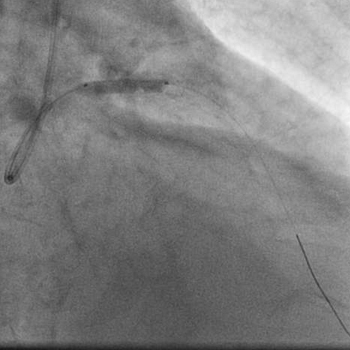 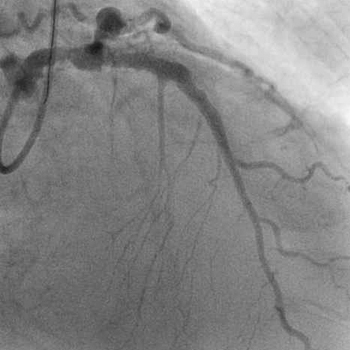 The patient’s chest pain was swiftly relieved following LAD stenting and balloon angioplasty of the left main coronary artery, and his pulmonary edema substantially resolved by next morning with parenteral furosemide. The dopamine drip was withdrawn completely by 72 hours. The ECG now displayed complete resolution of ST segments, normal QRS duration, and R waves from V2 to V6. 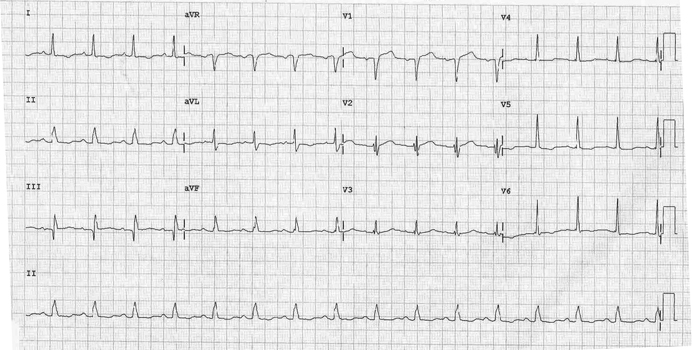 The patient subsequently underwent successful CABG with a LIMA and venous grafts. He was discharged on the tenth post-operative day.

This was a classic case of an evolving acute anterior MI. In view of the marked hemodynamic instability, the culprit vessel (proximal LAD artery) was not only dialted and stented with a BMS despite the presence of three vessel disease and a critical mid left main lesion. In order to ensure complete relief of myocardial ischemia, the left main coronary artery was also dilated, but not stented. Conventional protocols suggest that in the event of discovering left main or severe 3 vessel disease during primary PCI for an anterior MI the infarct related artery need only be dilated without stenting in order to allow subsequent CABG surgery. However, it also well recognized that following elective and primary balloon angioplasty, abrupt closure of the infarct-related artery, during or within hours of the procedure, can occur in 3% of the patients. This patient underwent stenting of his infarct-related LAD lesion to prevent any immediate or future recoil of the vessel as that would have been catastrophic. The patient was too unstable to permit stenting of the left main artery and hence it was thought prudent to merely dilate this vessel for immediate hemodynamic gain and prepare him for coronary bypass surgery that was successfully done 4 days after the index PCI procedure. The timing of CABG after restoration of antegrade flow in the culprit artery with primary PCI in patients with left main or severe multivessel coronary artery disease disease remains undefined.