A recent review and meta analysis of 522 randomized trials that included almost 117,000 participants suffering depression, has concluded that all antidepressants are better than a dummy tablet. For decades doctors have been debating about the effectiveness of anti depressant pills in the treatment of depression.Twenty one types of antidepressants were studied as compared with placebo or head to head. In total a little more than 87,000 participants were assigned to an antidepressant, while 29,425 were assigned to a placebo. The mean age of participants was 44 years, 62% were women, and the median duration of acute treatment was only 8 weeks. The bulk of patients included in the meta analysis was from North America (48%), 27% were from Europe, while only 7% of patients were from Asia. Amitryptaline was the most effective anti depressant as compared to placebo, while newer anti depressants such as fluoxetine and sertraline were least effective .

Almost 20% of the world population suffers from psychiatric problems and the majority of these have major depression. The extent of the problem can be gauged by the fact that the US is compelled to spend more than 200 billion $ for the management of depression. This meta analysis has been performed by researchers in Oxford university and has predictably taken the western print media by a storm, every major British daily has prominently displayed the study. The Guardian has gone to the extent of stating the that it’s now official that antidepressants work, its no longer some conspiracy by Big Pharma. The London Times has gone completely over the top by suggesting a million more people need antidepressants based on data provided by this meta analysis.What is however missed is that the authors of the paper concede almost in the beginning of their discussion that effects of the antidepressants were mostly modest, albeit more effective that placebo. Crucially it is also conceded by the authors that non industry funded trials were few in their meta analysis and also that many trials included did not divulge details of funding. The authors acknowledge that despite attempts at obtaining unpublished data, they are “aware a substantial amount of data is still not available to the public.”

Moreover not every patient prescribed an antidepressant showed a positive response. In fact antidepressants were found to be ineffective in 30% of participants. Prozac (fluoxetine) which enjoyed rock star status for many years was found to be minimally effective but well tolerated. The industry had thrown its entire might behind Prozac. It had been presented as the holy grail of antidepressant treatment, till a series of horrific killings were blamed on Prozac like drugs in the market. Prozac or fluoxetine is a selective serotonin reuptake inhibitor. Smith Kline Beecham, the maker of Americas second most popular antidepressant ( Paroxetine, another selective serotonin reuptake inhibitor) ,was ordered to pay up $8 million to the relatives of a man who killed his wife, his daughter, his grand daughter and then himself after taking paroxetine in 1998. The perpetrator had taken 2 tablets of paroxetine before the shooting. 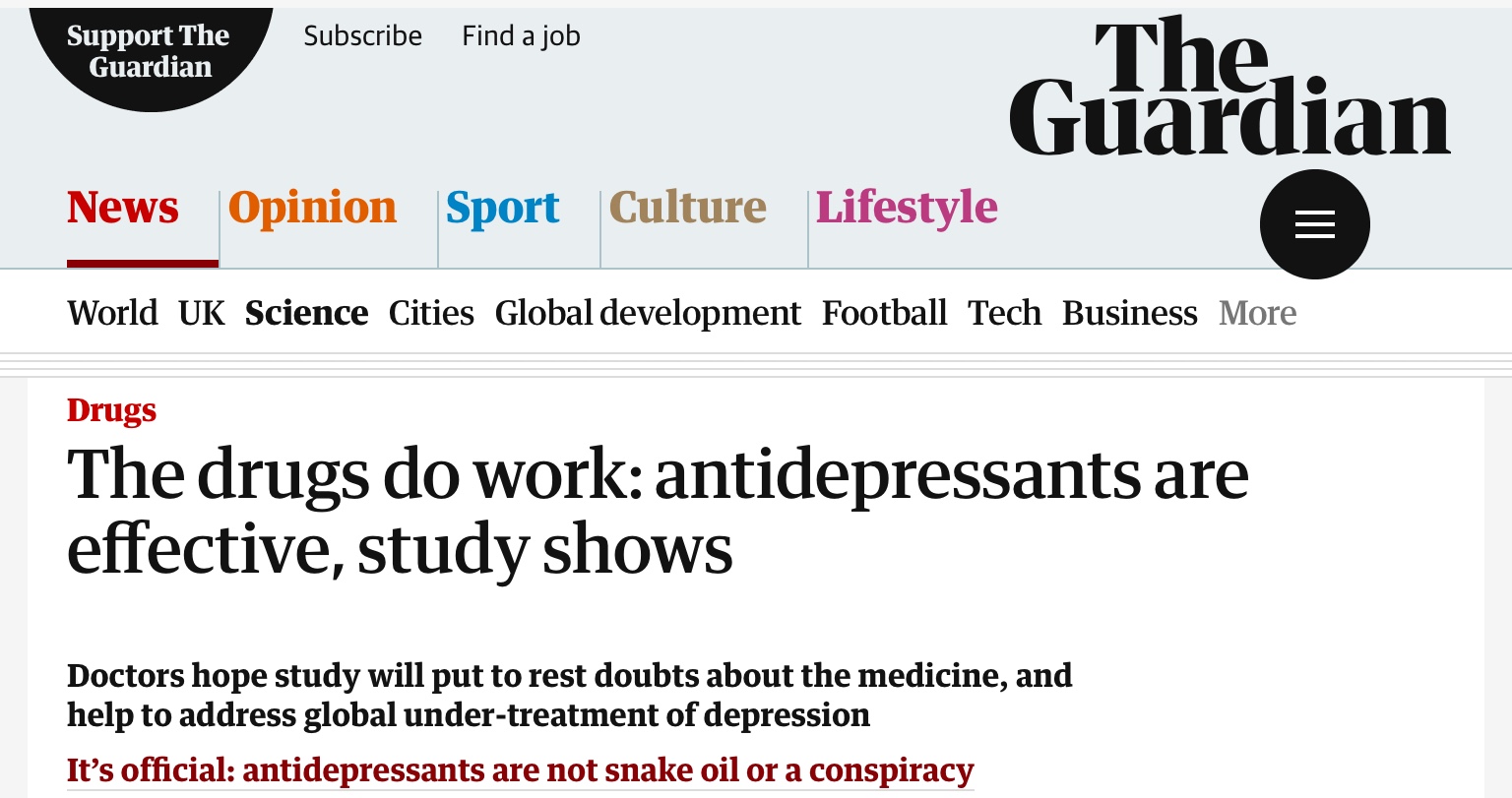 Eric Harris and a fellow student shot dead 12 students, and wounded 24 others before killing themselves on the campus of Columbine High School.Eric was taking Luvox, which is also a selective reuptake inhibitor. The manufacturer of Luvox conceded that 4% of young people develop mania on Luvox or fluvoxamine. The FDA has a black box warning of suicidal tendencies with Luvox. Autopsy done on Eric Harris revealed Lovix in his system.

Kip Kinkel in 1998 killed his parents, and killed 2 more the next day while wounding 22 others. Kip was on Prozac. Twelve tear old Christopher Pittman shot dead both his grandparents as lay asleep. Little Kip was on Prozac. John Hinckley almost shot dead Ronald Reagan after swallowing 2 tablets of diazepam ( anti anxiety medicine). Hinckley on that occasion wounded 3 more people, including a secret service agent and a policeman.

America has for decades witnessed horrific mass shootings. Invariably the massacres are extensively covered by the media with a lot of wringing of hands accompanied by somber prayers. There is also the customary breast beating against American gun laws but whispers by relatives of pills being taken by the perpetrators are uncommonly revealed. There are murmurs of Nickolas Cruz taking psychiatric medication but no official information is available. One of the reasons is clearly the fact that most if not all news channels are sponsored by drug companies. No drug company wants the slightest debate on the adverse effects of antidepressants. That would be unacceptable. Right now however the industry would be whooping with delight at the publication of the latest meta analysis. Cruz now in police custody massacred 17 people in his former school in Florida. His aunt has suggested Cruz was on medication.

As a cardiologist, I am concerned that amitryptaline, which was developed in the 1950’s, has emerged as the most effective antidepressant as compared to placebo. Amitryptaline is notorious for triggering sustained ventricular tachycardia. Ventricular tachycardia is potentially a lethal rhythm disturbance that can kill if not treated immediately, and almost every heart patient whose heart has been weakened ( by a previous heart attack, hypertension, valvular pathology) is susceptible to it. A substantial number of patients who have sustained a heart attack or are being treated for heart failure suffer from major depression. Treating such patients with amitryptaline would be akin to playing with fire. A better choice would most certainly be a serotonin uptake inhibitor.

Undoubtedly major depression is a huge problem across the world. Victims of depression truly suffer from hour to hour, and from day to day. The desire and yearning to kill one self must be a terrifying experience, that needs utmost empathy, and more importantly effective treatment. But a meta analysis however large should not prescribe antidepressants without careful selection of patients. It has to be borne in mind that modest exercise, meditation, and psychological support can provide considerable support for the depressed. This meta analysis had a mean sample study size of only 224 participants who were followed for a mere 8 weeks; we need larger randomized trials to confirm the conclusions, especially when drop outs due to adverse effects ranged from 64% % to 444% more than placebo !

We we have to look at alternative approaches to the problem. For instance a recent study divided participants into 3 groups. Two groups were provided the DASH diet, and these were found to have less depression as compared to the placebo group. The trial shows an association of less risk of depression with the DASH diet. The placebo cohort consumed a western diet that included high intake of saturated fats and red meats with reduced intake of fruits and vegetables. More than 960 people with average age of 81 were followed for more than 6 years. Participants on the Dietary Approaches to Stop Hypertension (DASH) diet consisting of fruits,vegetables, fat free and low fat dairy products, whole grains,low saturated fats and sugar were less likely to develop depression. The study will be presented at the American Academy of Neurolgy’s 70th Annual Meeting in Los Angeles in April 2018.

It cannot be overemphasised that diet, exercise, meditation, and psychological support may be as effective as anti depressant pills, if not more. Also that the meta analysis published in the Lancet had on an average 220 participants who were followed for only 8 weeks in individual trials. Anti depressants usually take more than a month to kick in. We still do not know precisely how much more effective they are as compared to placebo. Pills may not be the only answer for depression despite screaming headlines suggesting so in The Guardian, the Times ( London) and the Telegraph (London) based on the meta analysis published in the Lancet. Crucially the majority of the trials included in the meta analysis were funded by pharmaceutical companies. But if you are on an antidepressant, do not stop without professional consultation.