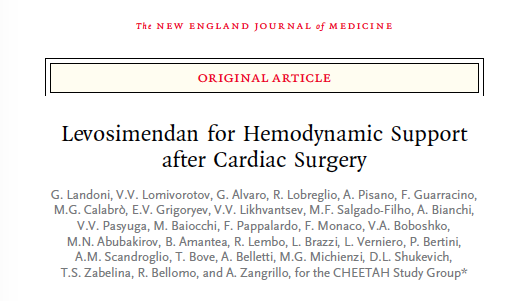 Low cardiac output syndrome following cardiac surgery is not uncommon and is consequent to systemic inflammation by heart lung machine, vasoconstriction or reperfusion injury. Treatment is usually with parenteral inotropes such as beta-adrenergic agonists and phosphodiesterase inhibitors once low output sets in. The flip side with inotropes is that they can increase both oxygen consumption of the myocardium and trigger atrial or ventricular arrhythmias. Observational studies have reported higher rates of postoperative myocardial infarction, stroke renal dysfunction and death as compared to those patients not receiving inotropes.

Levosemenedan is a novel inotrope that does not increase oxygen consumption, has prolonged duration of action, and increases myocardial contraction by sensitizing calcium binding to troponin C. It also acts as a vasodilator. Small-randomized trials have shown postoperative mortality to be lowered with levosemendan as compared to dobutamine, milrinone or placebo. But these studies were not powered to detect survival with levosemendan.

We now have 2 large randomized placebo controlled trials to confirm the conclusions of earlier small studies. The LEVO-CTS trial randomly assigned 882 patients with a left ventricular ejection fraction of 35% or less to preoperative levosemendan or placebo to find out whether levosemendan prevents low cardiac output syndrome. The drug was administered as a fixed dose of 0.2 micrograms per kilogram per minute for 1 hour, followed by a dose of 0.1 microgram per kilogram per minute for 23 hours. There were 2 types of primary endpoint; (a 4 component end point consisting of death, renal replacement, myocardial infarction, and use of a mechanical device) and (a 2 component endpoint of mortality and use of mechanical device). There was no difference in both endpoints nor was there any significant difference in adverse events. The 4-component endpoint occurred in almost 25% of patients in both groups while the 2-component endpoint occurred similarly in the levosemendan and placebo groups. 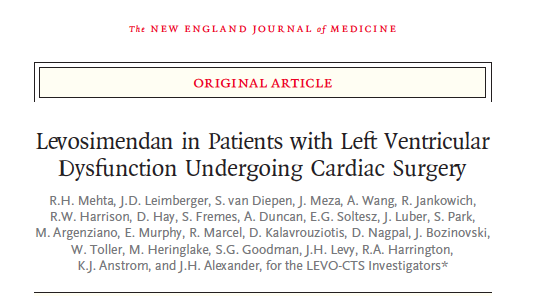 The LEVO-CTS investigators randomly assigned patients with reduced left ventricular ejection fraction who were undergoing cardiac surgery with cardiopulmonary bypass, and concluded that levosemendan did not reduce the rate of the composite of death, renal replacement therapy, perioperative myocardial infarction, or use of a mechanical cardiac assist device as compared to placebo in high risk patients. Levosemendan is supposed to raise stroke volume and cardiac output while reducing peripheral vascular resistance without increasing myocardial oxygen demand.

The other large randomized trial (CHEETAH) included more than 500 patients who developed the low cardiac output syndrome to levosemendan at an initial dose of 0.05 microgram per kg per minute and then adjusted from 0.025 microgram to 0.2 microgram per kg per minute for 48 hours or till the patient was in intensive care. There was no significant difference in mortality at 30 days. The authors concluded that in patients who required perioperative hemodynamic support after cardiac surgery low dose levosemendan in addition to standard care did not lower 30-day mortality.

The CHEETAH trial differed from other trials in that it included more than 50% patients requiring mitral valve surgery. The majority of cases of low output cardiac syndrome are due to myocardial stunning with the heart recovering within 24 to 48 hours. The authors of the CHEETAH trial do not recommend administration of levosemendan in addition to standard care in treatment of cardiac dysfunction after cardiac surgery. The mean infusion dose of levosemendan was 0.07 microgram per kg per minute in the CHEETAH trial; the lower dose was used to avoid development of hypotension with the drug. But systemic cardiac output data was not collected by the researchers that would have aided in better analysis. The median left ventricle ejection fraction was 50% in both the levosemendan and placebo groups. Only 4% of patients in both groups had left ventricle ejection fraction less than 25%.

In conclusion levosemendan, despite a unique mechanism of action, has no real advantage over conventional inotropes in management of perioperative low cardiac output syndrome in patients undergoing cardiac surgery. We continue to wait for that wonder drug that not only helps the heart pump more efficiently but also lowers complications and mortality in high risk patients subjected to heart surgery.