Rene Favaloro had written in 1993 to Dr. Denton Cooley: “ Besides being an outstanding surgeon, you are a good human being, and ……to be good is enough.”

More than a half century ago Rene Favaloro, a Sicilian born in Argentina, performed his first coronary artery bypass graft (CABG) operation on 9th May 1967. He and his colleagues had performed 100 CABG operations in 3 years and Favaloro has since been considered the “father” of CABG, even though the first actual procedure was performed by a German immigrant, Robert Goetz, in May 1960. Goetz anastomosed the right internal thoracic artery to the right coronary artery. But Goetz’s colleagues considered the operation “not only highly experimental, but also unwarranted” and prevented him from performing a second CABG procedure. The first CABG was done on a 38-year-old patient who lived for more than a year. There was however no autopsy and details of the surgery were not documented and so Goetz’s achievement went unrecognized until the Society of Thoracic Surgeons, in its Annals of June 2000, acknowledged that Goetz did “the first successful clinical operation on May 2, 1960.”

Goetz also is also credited with developing the intra-aortic balloon pump in the 1960’s, which is still used to give mechanical support in patients with poorly contracting harts.

Goetz had gained international recognition for his work on the physiology of circulation in giraffes in Cape Town, South Africa, in the 1050’s. He explained the ability of giraffes to lift their heads to their full heights without fainting. 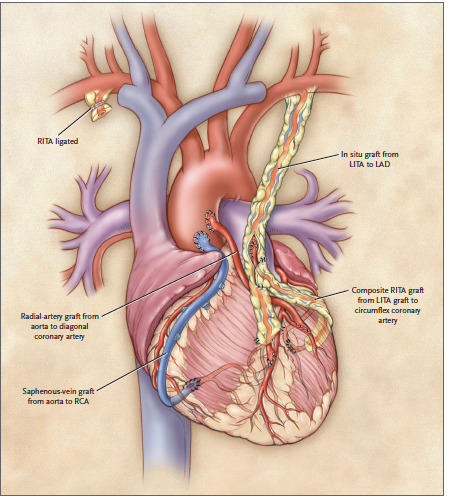 The credit of systematic protocol for CABG goes to Favaloro, even though 2 prominent cardiac surgeons claimed they had preceded Favaloro. David Sabiston, of Duke University claimed to have done so first in 1962, and Edward Garrett said he had done CABG in 1965 at the DeBakey Medical Centre, Houston. However these were unplanned surgeries done in a deteriorating situation. Favaloro’s surgery was planned and was also the first to be reported in a medical journal. One of he mentors of Favaloro at the Cleveland Clinic was Mason Sones, the cardiologist who developed coronary angiography, by which surgeons could assess blockage of the coronary arteries in the moving heart.

Favaloro chose to return to Argentina to set up a state of the art cardiology institute, but had to suffer the consequences of an economic depression. He wrote to the editor of the newspaper La Nacion that “I am going through the saddest period of my life.” Favaloro was deep in debts with no one coming forward to bail him out. Many hospitals owed his foundation 18 million dollars. He was found dead on July 29 2000, at the age of 77 years, by his secretary, in the bathroom of his apartment. Favaloro had shot himself in the chest, a gun was nearby, and the police attributed his death to suicide. The man, who had performed CABG on 13,000 patients, had shot himself through the heart. Favaloro’s suicide note, officially released in 2009, stressed that he did not die because of debts, but as a protest against corruption in Argentina’s medical system. He preferred to die rather than give into the demands of a crooked system. This was the man who developed CABG, which has already saved millions of lives.

CABG was one of the first major operations subjected to a randomized trial. The results of the first randomized trial, the Veterans Administration Cooperative Study, was published in 1977. CABG soon became the most thoroughly examined surgical procedure. By the 1990’s CABG began to be performed on a beating heart without the use of cardiopulmonary bypass (off-pump). It was reasoned that patients with poor heart function or complex coexisting conditions (stroke or lung disease) would have better outcomes with off-pump CABG. CABG without use of the heart lung machine was introduced to avoid the damaging effects of cardiopulmonary bypass. On pump CABG is done on a still (arrested) heart while off pump CABG is performed on a beating heart.

In 2009 results of the Randomized On/Off Bypass (ROOBY) trial showed that incomplete revascularization was more frequent in off-pump than on-pump CABG. Also angiographies at 1 year follow up revealed lower graft patency with off-pump than on-pump CABG. There was no significant difference in the composite outcomes of death, myocardial infarction or repeat revascularization at 30 days, but off-pump had a higher rate of 1-year composite than on-pump (9.9% vs. 7.4%; p=0.04).

Recently the CABG Off or On Pump Revascularization Study (CORONARY) showed no significant difference at 5 years, but the ROOBY trial has now published its 5 year follow up results. At 5 years, on pump CABG was superior to off-pump CABG with regard to death from any cause and the primary composite MACE outcome. A significant relative 28% higher risk of death from any cause was reported in off-pump CABG. An absolute 3.3% higher mortality was seen in off-pump CABG. 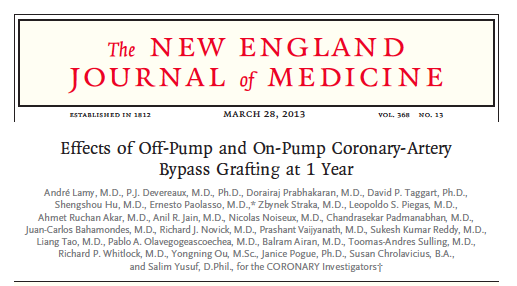 The CORONARY trial required surgeons to have greater than 2 years experience with off pump CABG and to have done at least 100 such operations. Another trial required that the surgeon must have done more than 300 off pump CABG; this was the German Off Pump Coronary Artery Grafting in Elderly Patients (GOPCABE). Both CORONARY and GOPCABE trials failed to show any advantage of off pump versus on pump CABG.

The researchers of the CORONARY trial that had randomized 4752 patients to off and on pump CABG had recorded no significant difference in the primary end point, a composite of death, myocardial infarction, stroke or new renal failure. The GOPCABE trial had included 2539 patients, all more than   75 years of age. All 3 trials (ROOBY, CORONARY and GOPCABE) have shown similar prevalence of death, stroke acute kidney failure at 30 days, in both off and on pump CABG. 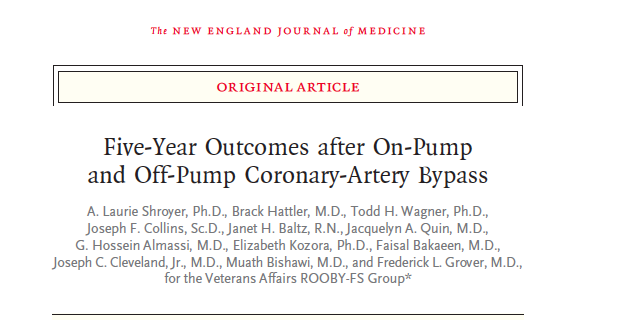 The ROOBY Follow up Study (ROOBY FS) has reported higher rates of death (15.2 % vs. 11.9%, p=0.02) and composite clinical outcomes at 5 years follow up in the off pump group. The CORONARY trial however did not show any difference in mortality or clinical outcomes at 5 years. The CORONARY results may be explained by greater experience of the surgeons in that trial. Surgical experience, clinical judgment and operative skills could influence surgical outcomes. The ROOBY investigators included more than 2000 patients from 18 medical centres. 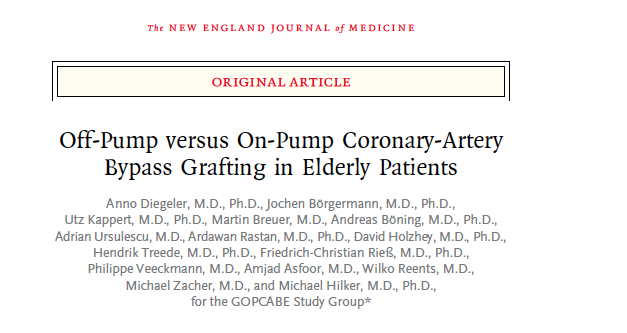 It would be prudent to recognize that off pump CABG may provide better results in certain subsets of patients. The majority of patients could be fare equally well with either off pump or on pump CABG. The risk of stroke may be lesser in patients more than 75 years with off pump CABG. Patients with a Society of Thoracic Surgeons Predicted Risk of Mortality score of more than 3% could do better with off pump CABG, as also patients with a heavily calcified aorta. We now have to trawl through all the data to identify which subset of patients would benefit more from either off pump or on pump CABG. Off pump CABG is the cheaper procedure and therefore has become popular in India and China.