Considerable progress has been made in the treatment of chronic heart failure, with multiple randomised trials reporting significant reduction in mortality, improvement in quality of life, reduction in symptoms, bettering of functional capacity and arresting further remodelling of the heart. All guide lines recommend that chronic HF be initiated by an ACE inhibitor or angiotensin receptor blocker (ARB) along with a beta blocker in patients with reduced left ventricular ejection fraction lower than 35%. If the combination dos not prove effective, a mineralocorticoid (spironolactone or eplerenone ) should be added. Further ratcheting of treatment in the event of failure of the above cocktail becomes interesting. Ivabradine may be added in case heart rate persists more than 70 per minute despite full dose of a beta blocker. Ivabradine suppresses the funny cells of the sinus node. A bi-ventricular pace maker (CRT) can be implanted in case there is left bundle branch block with the QRS width more than 120-130 msec. Also if the cocktail does not work there is a new medicine in the market; a combination of valsartan (ARB) and sacubitril (neprilysin inhibitor) or ‘ARNI’ should replace the ACE inhibitor or ARB in the original cocktail of 3 drugs. In fact latest guidelines suggest that ARNI could replace an ACE inhibitor or ARB even if they are effective because of substantial incremental benefit with ARNI as shown in the large PARADIGM trial.

Chronic heart failure afflicts almost 1-2% of adult population in developed countries. The prevalence in India also must be in the millions and crores. Morbidity and mortality are sadly quite high. Once hospitalised 10-15% patients have worsening of heart failure and on discharge as many as 10-15% die within 6 months. Congestive heart failure is obviously as “malignant” as any “malignant cancer”. As many as 7% of people above 70 years are affected. But as with hypertension treatment less than 25% patients of heart failure take full dose optimal therapy, largely because treating physicians are unaware or nervous about providing full dose treatment. Treatment of course should be begun at a “low dose”, administered “slow” but “aiming high”. Always look out for hypotension and any alteration in kidney function. The European Society of Cardiology guidelines appreciate high prevalence of chronic kidney disease in patients with heart failure. Usage of loop and thiazide diuretics mandate caution in context of declining renal function; however continuation of an ARB or ACE inhibitor is encouraged unless there is significant decline in kidney function.

Diuretics albeit used extensively in acute heart failure as also post discharge have never shown reduction in mortality; hence post discharge , minimal administration of a diuretic is recommended. There can be patients in whom a diuretic can be completely omitted after becoming completely asymptomatic. Interestingly heart failure was considered a temporary phenomenon for 3000 years that could be tackled by removing fluid overload with a diuretic. Invasive and non invasive monitoring that detected on going structural and functional deterioration of the heart compelled us to recognise chronicity of heart failure.

Diuretics were fine in a case of rheumatic mitral stenosis with pulmonary oedema; they would rapidly decongest the lungs and the patient would subsequently be ballooned or operated upon. The patient’s life was saved. However nowadays in almost all patients of chronic heart failure the process of remodelling is ongoing albeit silent and unrecognised. The patient lands up in the emergency when finally the lungs get so congested breathing becomes unbearable. In other words these patients with worsening heart failure do not have a new acute disease; they present with gradual progressive increase in filling pressures in the preceding weeks. Occasionally acute decompensation may be due to an arrhythmia or infection.

Patients with chronic heart failure suffering acute decompensation have raised troponin levels indicating stress induced heart muscle injury. Researchers therefore considered managing this acute injury in order to prevent long term deterioration in heart function. The first randomised trial employed serelaxin a recombinant version of the hormone relaxin, in the RELAX ACUTE HEART FAILURE 1trial. Relaxin is an anti inflammatory, anti fibrosis hormone released during pregnancy that also prevents organ damage. Above all it is a vasodilator and hence reduces blood pressure. The RELAX ACUTE HEART FAILURE 1 not only reported significant reduction in troponin release but also a stunning 37% decrease in mortality. Sceptics however were quick to point out that the trial was not powered too detect mortality and they were right. Another trial using a natriuretic peptide ularitide during acute heart failure too failed to show reduction in death despite lowering NT-pro BNP levels. 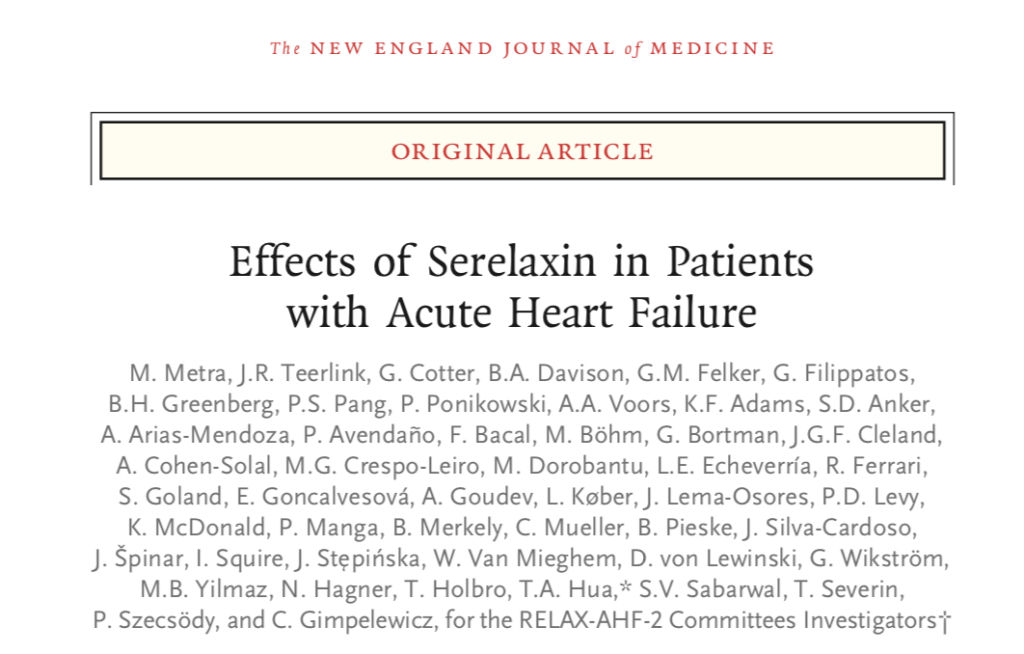 The most recent trial was published yesterday; this is called RELAX ACUTE HEART FAILURE 2; this also has not shown reduction of mortality at 3 months as compared to placebo; nor has it shown less worsening of heat failure at 5 days as compared tom placeo. The RELAX ACUTE HEART FAILURE 2 is a large randomised trial involving more than 6,500 patients with acute heart failure. A 48 hour infusion of serelaxin at maximum dose of 30 microgram per Kg per day in addition to standard failed to alter prognosis or record any improvement in kidney function; the trial had included patients with mild to moderate renal dysfunction. Patients had to have basal blood pressure greater than 125 mm Hg. Patients had to have symptoms of breathlessness and evidence of lung congestion on chest XRay after an intravenous injection of 40 mg furosemide. The infusion was stopped if blood pressure was found to be 100 mm Hg on 2 consecutive occasions 15 minutes apart. It is important to note that mean left ventricle ejectin faction in treated and placebo groups was 39%. Adverse events were similar in treated and placebo patients. The researchers have concluded that serelaxin treatment did not result in lower cardiovascular mortality at 180 days or a smaller number of patients with worsening heart failure at 5 days as compared to placebo.

So,for now, the treating physician would do well to focus on treating patients in the chronic heart failure phase rather than the acute admission. The reason being that no drug so far has been found to be effective in the setting of acute heart failure but there is formidable evidence in support of drugs treating chronic heart failure; these drugs lower mortality, prolong productive life, erase symptoms and also last but not the least prevent future hospitalisation; both ivabradine and ARNI being spectacularly effective when added to a beta blocker and a mineralocorticoid receptor antagonist. For now the cornerstone for treatment of heart failure is surely an “Indian MBA “ or ivabradine, Mineralocorticoid receptor antagonist , beta blocker and ANRI.