About 5-8% of patients undergoing percutaneous coronary intervention also suffer from atrial fibrillation (AF). Oral anticoagulation with a vitamin K antagonist is better than dual antiplatelet therapy (DAPT) with aspirin and a P2Y12 inhibitor in preventing stroke in a patient with AF. On the other hand DAPT is superior to oral anticoagulation in reducing the risk of stent thrombosis with first generation stents.

Treatment in a patient with AF who has undergone PCI must balance the risk of bleeding with that of stent thrombosis and ischemic stroke. Triple therapy consisting of DAPT and oral anticoagulation may result in bleeds with rates of 2% in the first month and 4%-12% within the first year of treatment.

Rivaroxaban is an oral factor Xa inhibitor is associated with lower risk of stroke and systemic embolism in patients with nonvalvular AF, and significantly lowers rates of fatal bleeds and intracranial hemorrhage than a vitamin K antagonist.

The PIONEER AF-PCI trial (NEJM; November 14,2016) was an international randomized trial sponsored by a drug company that included patients with paroxysmal, persistent or permanent non-valvular AF who had had PCI with stent deployment.

The researchers reported that in patients undergoing PCI and having AF treatment with low dose or very low dose rivaroxaban was associated with lower risk of clinically significant bleeding than with standard triple therapy that included a vitamin K antagonist. The rates of major cardiovascular events were similar. There was an absolute difference of almost 9% lower bleeds in the rivaroxaban groups as compared with the vitamin K inhibitor cohort.

A reduced dose of 15 mg daily of rivaroxaban in patients with moderately impaired renal function (creatinine clearance of 30 to 49 ml per minute) resulted in similar efficacy and safety profiles to those with normal renal function in the ROCKET AF trial. However both the 15 mg and 20 mg dose when used in AF was associated with significantly increased risk of bleeding if administered with DAPT in the ATLAS ACS 46 trial (Lancet 2009;374:29-38). In the ATLAS ACS 2 –TIMI 51 trial the addition of very low dose rivaroxaban (2.5 mg twice a day) to DAPT in patients with acute coronary syndrome was associated with reduced deaths, myocardial infarction and stroke than was DAPT alone. Even a 10 mg dose of rivaroxaban combined with DAPT in patients with acute coronary syndrome leads to more bleeding as compared to a 5 mg dose. The safest dose of rivaroxaban appears to be the 2.5 mg twice a day in patients undergoing ACS.

The WOEST trial (Lancet 2013;381:1107) compared the safety and efficacy of clopidogrel plus with those of clopidogrel plus aspirin and warfarin in 573 patients undergoing PCI needing anticoagulation. The group getting warfarin and clopidogrel had significantly lower rates of any bleeding through 1 year after PCI than the group receiving triple therapy. 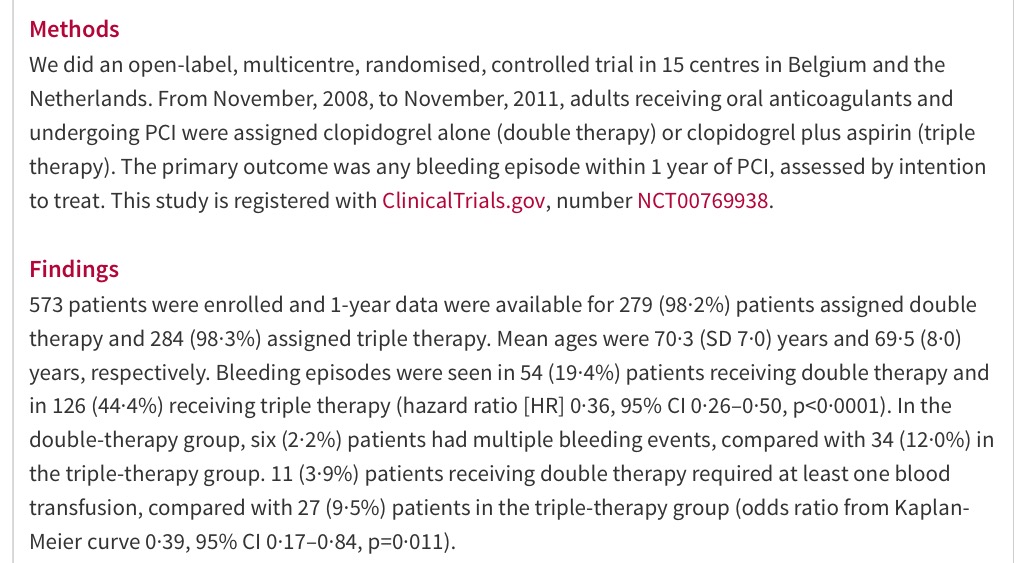 The WOEST investigators have to be lauded for daring to drop aspirin from the standard triple therapy. The 3 most important findings of the study were 1) Double therapy significantly reduced bleeding although difference was driven by minor bleeding; 2) Double therapy did not increase stent thrombosis; 3) Double therapy did not increase the risk of stroke and myocardial infarction and actually these clinical events were less than triple therapy. Flow up was however only for one year.The take home message of the WOEST trial was that dropping aspirin significantly decreases bleeding without altering risk of stent thrombosis, MI or stroke.

The researchers of the PIONEER trial concluded that administration of low dose (15 mg once a day) plus a P2Y12 inhibitor or very low dose rivaroxaban (2.5 mg twice a day) plus DAPT for 6 or 12 months was associated with a lower rate of clinically significant bleeding than was standard therapy with a vitamin K antagonist plus DAPT for 6 or 12 months. All 3 groups had similar efficacy rates although with broad confidence intervals diminishing the certainty of conclusions regarding efficacy. The rates of death, myocardial infarction, or stroke were similar in the 3 groups.

Very low dose rivaroxaban (2.5 mg twice a day) along with DAPT still needs further confirmation about its efficacy in stroke prevention to become standard therapy in the patients described.