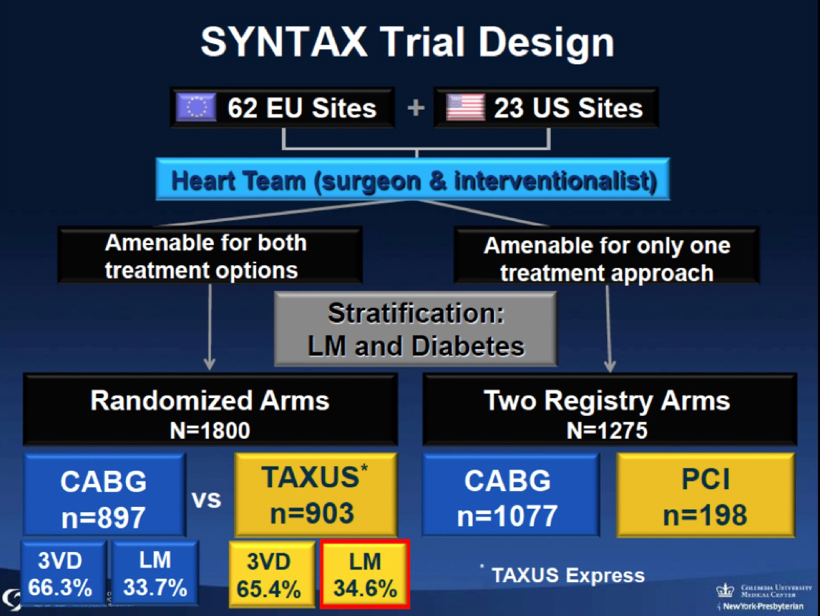 Great emphasis has been laid upon the SYNTAX Score (SS) for stratifying patients for coronary intervention. All cardiology societies unanimously agree that an SS of >22 merits coronary bypass surgery (CABG) as opposed to percutaneous coronary intervention (PCI) with a drug eluting stent (DES). This conclusion has been drawn from the SYNTAX Trial published in 2009. This was the largest randomized trial conducted that compared CABG to PCI in patients of coronary artery disease. About two thirds patients had stable angina while the remaining suffered from unstable angina. It was necessary that there was 50% diameter stenosis of a concerned artery and the smallest vessel taken into account was at least 1.5 mm in diameter.

Patients in the SYNTAX Study were divided into 3 groups, low risk group (SS up to 22), intermediate risk (SS 23-32) and high risk (SS 33 or >). The SS was derived from anatomical characteristics based upon number and site of lesions. Numerical points were given also to presence of left main blocks, calcification, tortuosity of vessel, chronic total occlusion, thrombus, bifurcation lesions and left or right predominance. There was no contribution provided by the clinical characteristics of the patient.

The results at 5 years follow up for the left main patients, consisting of 705 in number were that there was no significant difference in the combined clinical endpoint of mortality, myocardial infarction, and stroke between patients assigned PCI and CABG. Strokes were actually higher with CABG while revascularization was needed more in patients undergoing PCI. Remember that in patients with 3-vessel disease CABG provided better clinical outcome when a patient had a score greater than 22, or in other words CABG was superior to PCI in intermediate and high-risk groups of patients. On the other hand PCI was equivalent to CABG in both low risk and mid-risk patients (up to SS score of 32). The Syntax trial was conducted in 85 US and European cities and included 1800 patients in all. 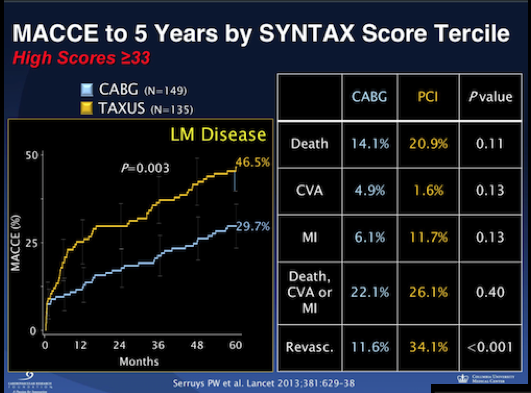 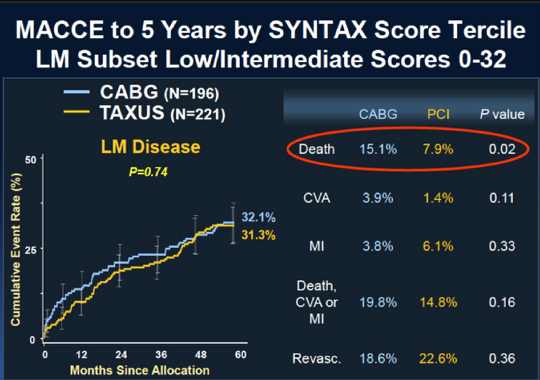 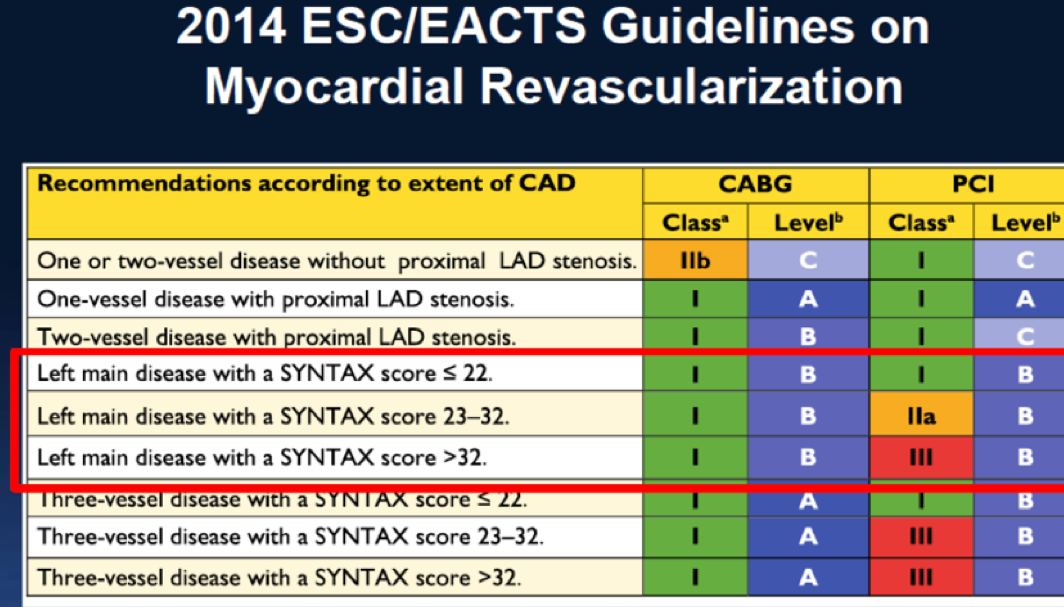 All cardiac societies have recommended in their guidelines that patients with 3-vessel disease having an SS of more than 22 have CABG and all patients with left main disease go for CABG if the score is greater than 32. The SYNTAX trial results at 5 years follow up in patients with a score of more than 32,however, failed to show any significant difference in combined endpoint of death, myocardial infarction and stroke between CABG and PCI. There was also no significant difference in individual endpoints of death and myocardial infarction. 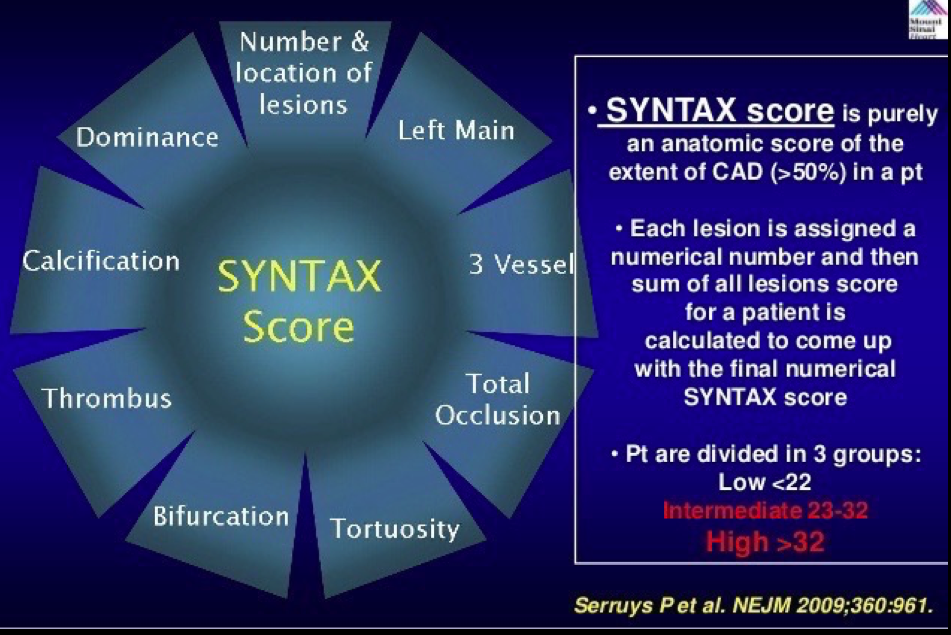 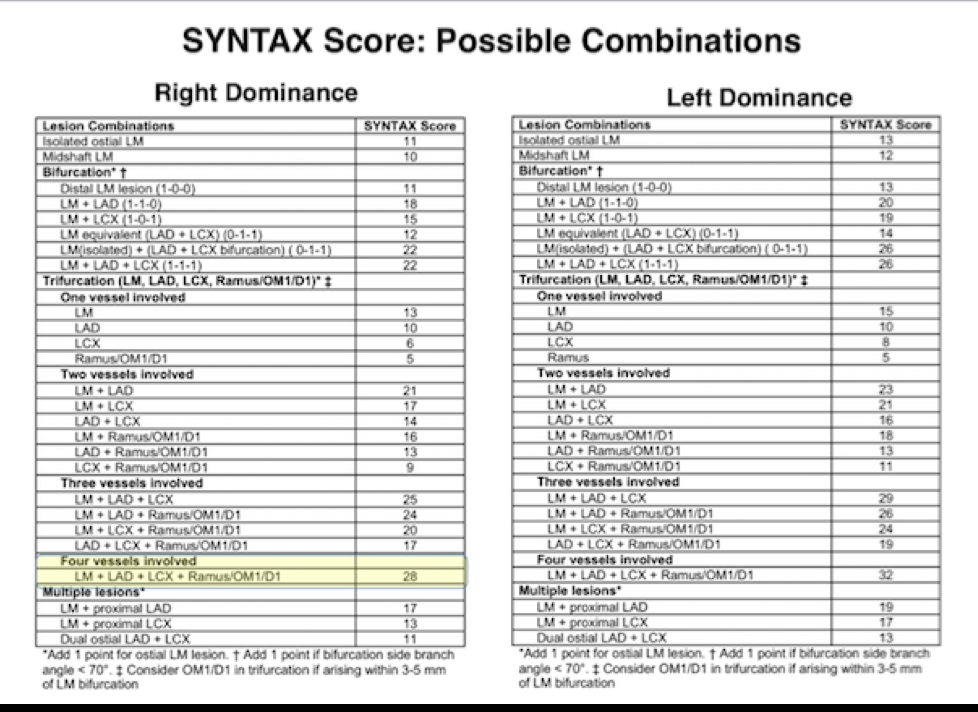 Clinicians and researchers soon realized that employing the SS by itself was inadequate for stratifying patients. Another score was evolved that included clinical parameters; this was called SS 2, and was first published in the Lancet in 2013. The SS 2 added 6 clinical variables to the anatomical SYNTAX score and termed this SYNTAX score II. The 6 clinical variables added were age, sex, left ventricle ejection fraction, creatinine clearance, chronic pulmonary disease and peripheral vascular disease. Points depending upon these clinical variables were added to the SS and the SS II was validated in the DELTA registry and the Kyoto registry (almost 7000 patients). The SS II is used to anticipate death at 4 years. The SS II is considered more reproducible and superior to the earlier anatomical SS based upon eyeball estimate of coronary artery stenosis. Importantly the SS II does not take diabetes into consideration because epidemiological studies in large number of patients have revealed that diabetes by itself does not impact prognosis if it is not accompanied by impaired kidney function. 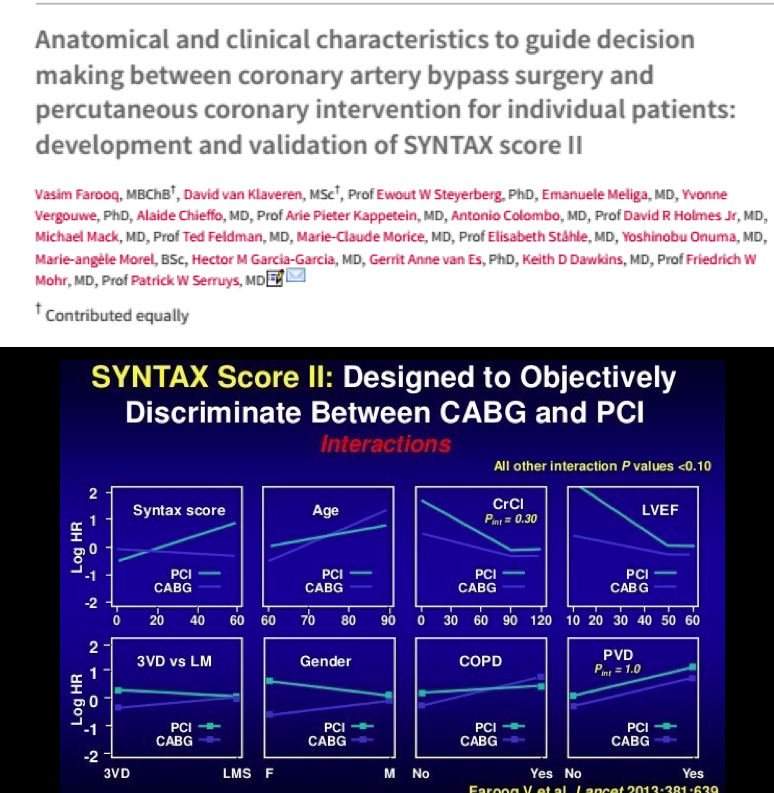 It is now realized that a patient with a low SS may not necessarily do better with PCI as compared to CABG. A young woman with impaired creatinine clearance but a low SS will actually do better with CABG. Conversely an old male with normal left ventricle ejection fraction and high SYNTAX score but also suffering from chronic obstructive pulmonary disease will have lower mortality with PCI as opposed to CABG at 4 years.

A meta analysis of 4 important randomized trials testing left main blocks has revealed no significant difference in hard points between patients assigned to CABG and PCI. The Le Mans trial has recorded no difference in mortality, myocardial infarction or stroke in a decade long follow up of 100 patients. The Pre Combat (Korean) randomized trial of left main disease involving 600 patients too failed to show difference in deaths and myocardial infarction between CABG and PCI. The Koreans have in fact increased the use of PCI from 31% to more than 50% in patients with left main blocks.

The SS II has been employed by the researchers doing the EXCEL study, which will be presented this year in the TCT Meeting at Washington DC. The EXCEL trial has assigned 1905 patients with at least 50% stenosis of the left main artery to CABG or PCI with the second-generation everolimus eluting stent. The SYNTAX trial had used the first generation paclitaxel eluting stent in the PCI arm. A paper published last year by the EXCEL researchers in Eurointervention has predicted, based upon SS II, with 78% chance that there will be less mortality in the PCI group than with CABG. The paper states that there is a 40% chance that reduced deaths with PCI will be statistically significant; there will be a 4% chance that CABG will have lesser deaths than PCI at 4 years follows up. These figures are for predicted mortality and it will be interesting to see if they match up with observed deaths.

The EXCEL study will use either fractional flow reserve (FFR) or intravascular ultrasound (IVUS) to confirm ischemia in left main lesions between 50% and 70%. The reason for employing these imaging techniques is that it is now well known that a substantial number of arteries with blocks between 50 % and 70% may not be physiological blocks.

Fractional flow reserve is the ration between mean coronary pressure distal to the block and mean aortic pressure measured simultaneously during maximal hyperemia induced by intravenous adenosine. The FAME trial assessed PCI based upon visual estimation at coronary angiography versus PCI based upon a functional block picked up by FFR in a randomized fashion. An FFR ratio more than 0.80 is considered non-ischemic while a ratio less than 0.80 implies a functional stenosis. The FAME trial (including more than 1000 patients with 40% having blocks between 505 and 50%) reported significantly lesser mortality and myocardial infarction at the end of 2 years in patients who underwent PCI with ischemic blocks (evaluated with FFR) as opposed to PCI based upon coronary angiography. 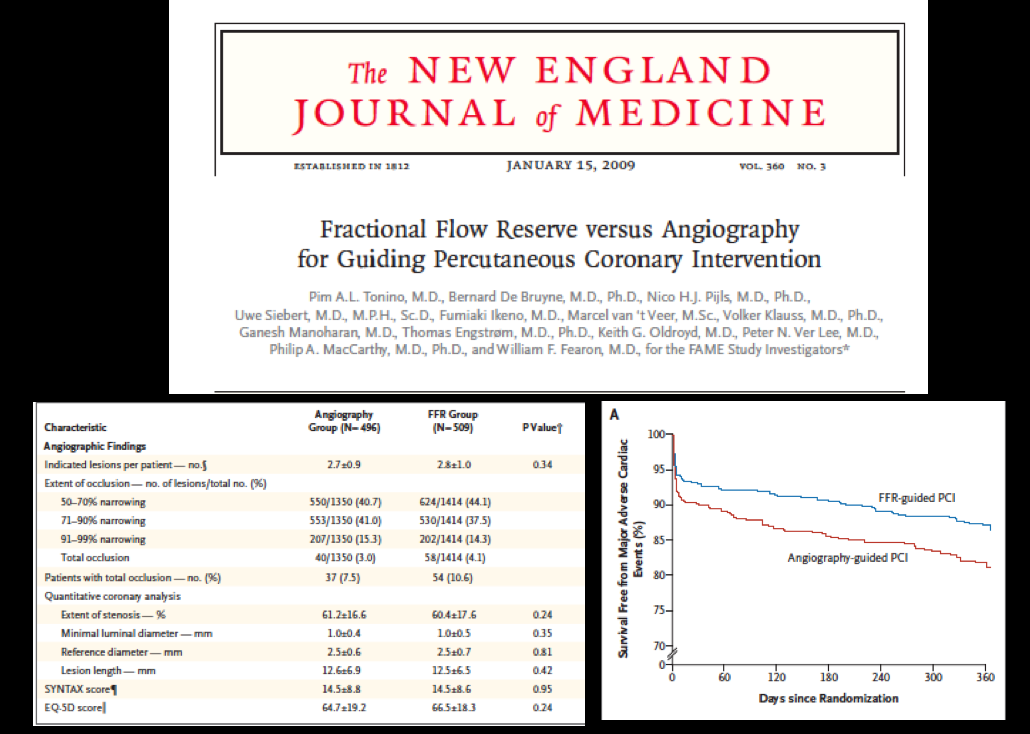 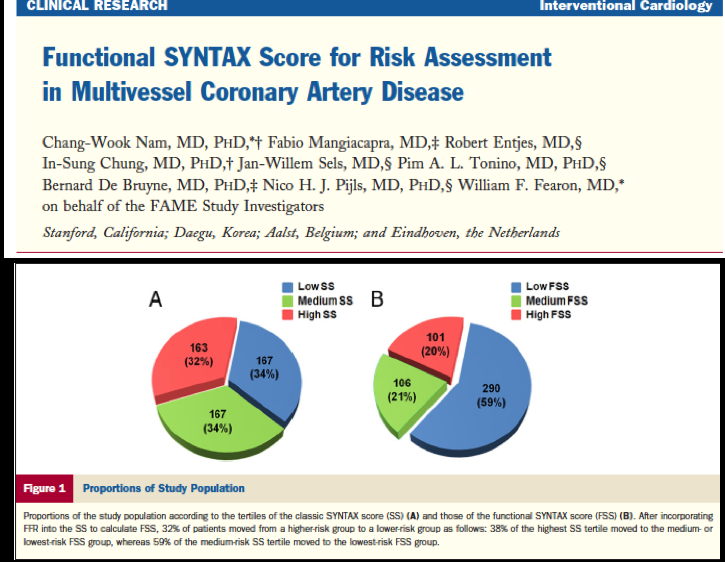 It was also observed that 13% of patients with 3-vessel disease had no ischemic block in a single artery, 43% of these patients had functional blocks in 2 of 3 arteries, while 34% had a physiological or functional block in only one artery (post FFR determination). The important conclusion drawn from this study was that a substantial number of patients considered to be high risk by SS are actually in the intermediate or low risk groups subsequent to checking functional status of these stenosis by FFR.

It is well to recall that almost 40% of left main patients in the SYNTAX trial had an SS greater than 33, and thus one can assume that one third of these patients were actually carrying a score less than 33. 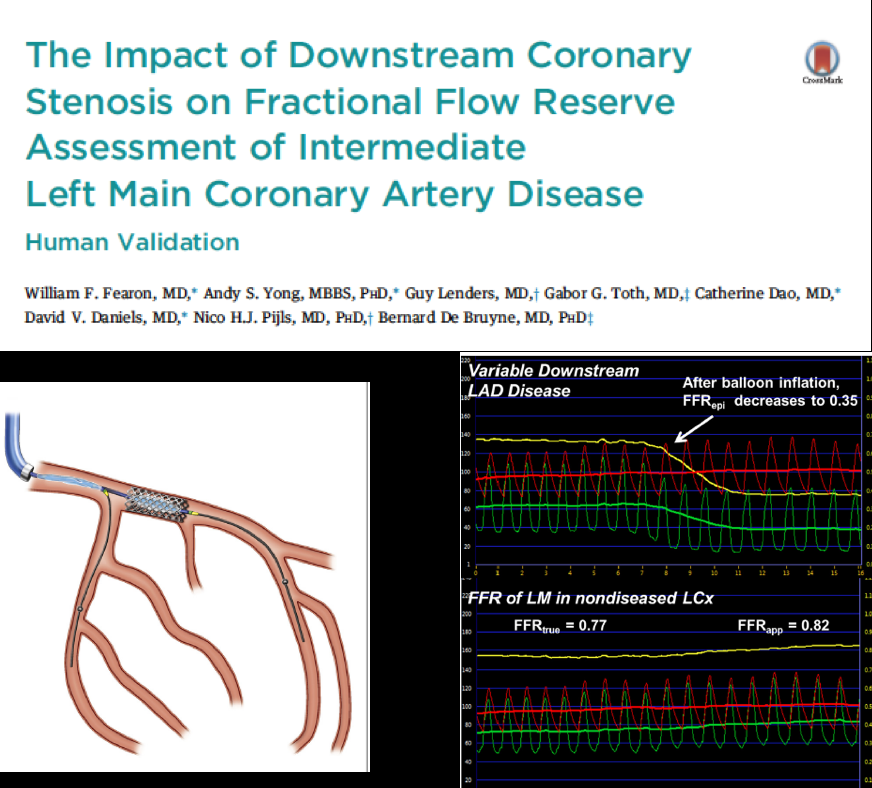 A brilliant study used FFR to determine the impact of a lesion in the LAD or LCX arteries in the presence of a left main block exceeding 50%. The conclusion of the authors was that in the presence of an LAD block the pressure wire should be put into the LCX artery. If the FFR is more than 0.85 the left main block does not need intervention; if the FFR is less than 0.80 then one can with some certainty tackle the left main stenosis. In the event of an FFR being between 0.80 and 0.85 one must check the FFR with a pressure wire distal to the LAD block; intervention would be required if this FFR returns below 0.45.

Two large randomized studies will be presented in this year’s TCT meeting bearing in mind the gaps in the anatomical SYNTAX score used in the SYNTAX trial. Both these trials (EXCEL and NOBLE) will employ imaging techniques (FFR and IVUS) to confirm whether a 50% or more stenosis in the left main artery is a functional (or physiological) block. EXCEL will use everolimus eluting stents while NOBLE will use biolimus eluting stents; both trials will compare CABG versus PCI in left main disease. Crucially NOBLE will not use SYNTAX score while EXCEL has patients with a SYNTAX score below 33. 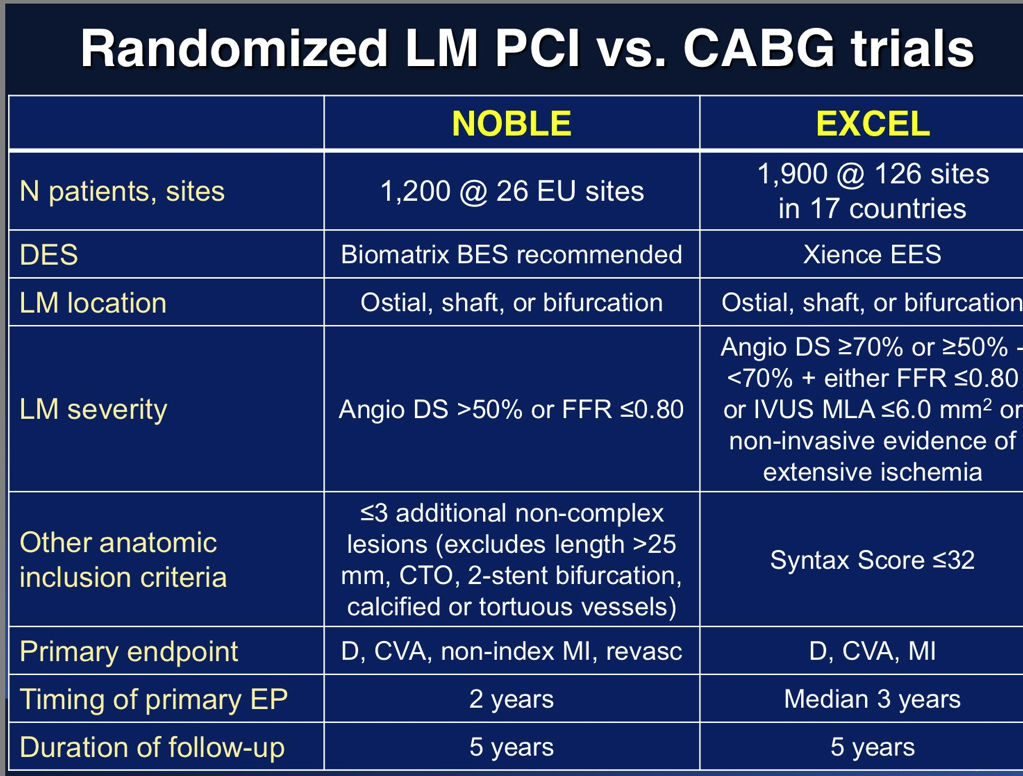 In conclusion, every patient with left main disease deserves and demands a combination of knowledge, evidence, data and loads of common sense when deciding future course of treatment. Every patient will not need CABG and at the same time every patient cannot be managed by PCI. The best approach as of now will be prudent usage of the SYNTAX Score, SYNTAX Score II (adding clinical parameters) and imaging modalities such as FFR and IVUS, because currently the SYNTAX Score has ceased to be last word on stratification of left main patients. In the meantime we await with bated breath the results of the NOBLE and EXCEL trials.