Fractional flow reserve (FFR) albeit highly accurate in determining the physiological relevance of an intermediate coronary block is still not widely used in most cath labs of the world. Data from 2008 to 2009 has revealed that FFR was used in only 6% of indeterminate lesions in the United States. Results of FAME and FAME 2 trials have shown significant reduction in major adverse cardiovascular events with FFR guided coronary intervention in patients with stable coronary disease. There was no significant reduction in mortality in the FAME trial. 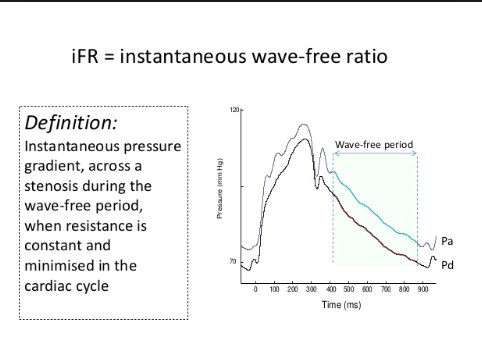 Fractional flow is defined as the ratio of maximal blood flow in a stenotic artery to normal maximal flow. It is measured by dividing the distal coronary pressure by simultaneous aortic pressure measured within the guiding catheter. A coronary pressure guide wire measures the distal coronary pressure. An FFR of 0.80 or less is considered as an ischemia producing coronary block. A coronary lesion greater than 0.80 can be safely deferred. Deferring PCI in non-ischemic stenotic lesion as assessed by FFR results in an annual rate of 1% in patients with single vessel coronary artery disease, which is lower than the rate after routine stenting.

The use of FFR continues to be low due to the need of inducing hyperemia with adenosine (intravenous or intracoronary). Adenosine can cause bradycardia or heart block necessitating the need terminate the study. Adenosine can also produce chest pain or breathlessness apart from prolonging the procedure and adding to expenses.

Another technique called the instantaneous wave free ratio (iFR) has been developed that does not require administration of adenosine. The iFR measures pressure gradient across a block during diastole when resistance to coronary flow is the least. 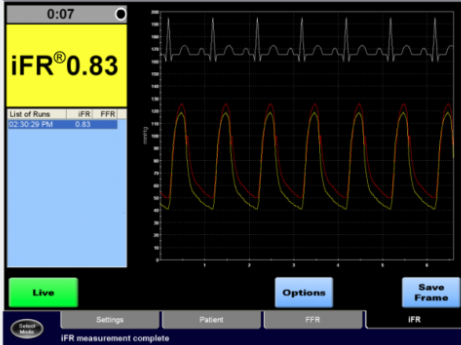 Two recent trials have compared iFR with FFR in a randomized manner in patients with intermediate stenosis. Most of the patients had stable angina. In patients with acute coronary syndrome the culprit lesion was initially treated by standard measures and the remaining lesions if intermediate had assessment done by iFR or FFR. Revascularization was deferred if iFR was greater than 0.89 or the FFR was higher than 0.80. The trials were the DEFINE-FLAIR and the iFR SWEDEHEART trial. 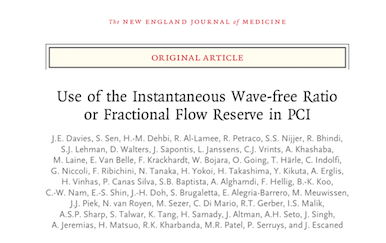 In both trials intracoronary nitroglycerin (100-300 mcg) was administered before assessment of the coronary lesion. Lesions 80% or greater were tackled by PCI without resorting to iFR or FFR. A coronary pressure guide wire obtained the iFR and FFR measurements. IFR or FFR evaluated intermediate lesions between 40 and 80%. Adverse events intra-procedure were significantly greater with FFR as compared to iFR based PCI.

To sum up, iFR may emerge as the standard physiological index procedure because of the fact that results are noninferior as compared to FFR, complications with adenosine are avoided, and the procedure is quicker and probably a trifle cheaper. In stable angina, PCI is performed not to reduce mortality, but to control angina. Both iFR and FFR are not needed for treating culprit lesion in a case of acute coronary syndrome.

Both (FFR and iFR) equipment are manufactured by the same company. The recent studies are meant to underscore ease of operation with iFR as compared to FFR, which has failed globally to penetrate the market adequately. Moreover no randomized study has shown reduction in mortality either with FFR or iFR.