Dabigatran a direct thrombin inhibitor came into reckoning with the RELY trial published in the New England Journal of Medicine in 2009. More than 18000 patients of atrial fibrillation with increased risk for stroke were randomized to receive 110 mg or 150 mg of dabigatran twice a day in blinded fashion compared with warfarin adjusted to therapeutic INR in the remaining cohort. Warfarin, a vitamin K antagonist, has been used as an effective anticoagulant for decades. Warfarin reduces the risks of stroke by two thirds in patients with atrial fibrillation. Atrial fibrillation is the commonest sustained arrhythmia in the world, leading to stroke, systemic embolism, heart failure, ventricular arrhythmia and death. Warfarin however has been a hard task master, it has a bad efficacy/ risk ratio, tricky interactions with drugs and food, wide ranging blood level necessitating frequent blood monitoring. Apart from dabigatran the other non vitamin K antagonist oral anticoagulants (NOAC’s) available in the market are the direct factor Xa inhibitors, apixabn, rivaroxaban and edoxaban.

Against this background of the possibility of increased risk of myocardial infarction the latest big study with dabigatran called the MANAGE trial is bound to draw a lot of attention. The MANAGE trial presented at the ACC 2018 meeting has come up with a new disease entity called myocardial ischemia after non cardiac surgery or MINS. MINS is diagnosed by raised troponin levels and almost 90% of patients in MANAGE were asymptotic. The patients who had suffered a myocardial insult were randomized to 110 mg dabigatran twice a day versus placebo. The primary outcome was a composite of death, myocardial infarction, ischemic stroke, peripheral artery disease, amputation, and acute venous thromboembolism. Dabigatran lowered ischemic outcomes by an absolute 4% as compared with placebo, from 15% to 11%. Hence only 25 patients will be needed to be treated to prevent these ischemic clinical events. Surprisingly there was no difference in bleeds in the 2 groups. Moreover almost half the patients stopped taking dabigatran.

In MANAGE, 80% of patients with MINS were diagnosed on the basis of increased troponin values, while 20% of patients had myocardial infarction based on standard definition. The trial included more than 1700 patients with a diagnosis of MINS at an average of 5 days post non cardiac surgery. Almost 50% were women. About two thirds of patients were on aspirin and a statin. Duration of follow up was 16 months, with mean patient age being 70 years.

The questions that will be raised are whether all patients undergoing non cardiac surgery have a troponin check? In the event they are raised should these patients be administered an anticoagulant along with aspirin? For how long? We will need to wait for more randomised trials that answer these queries. The fact that only 50% of patients got to finally included in the trial with almost half of dabigatran patients decided to stop taking the drug makes the study a trifle unconvincing. But a myocardial infarction following surgery can have a grim prognosis. These are not typical due to a ruptured atherosclerotic plaque in the coronary artery but because of an oxygen supply demand mismatch, which can be due to a fast heart rate, fever, hypotension or hypovolemia accompanying non cardiac surgery. Such a myocardial infarction is termed type 2 as per universal definition of acute myocardial infarction. The MANAGE trial may compel physicians not only to measure troponin levels post non cardiac surgery but also contemplate whether to administer dabigatran in patients with MINS. It should be also noted that the trial was terminated early, and the primary outcome definition was changed midway. 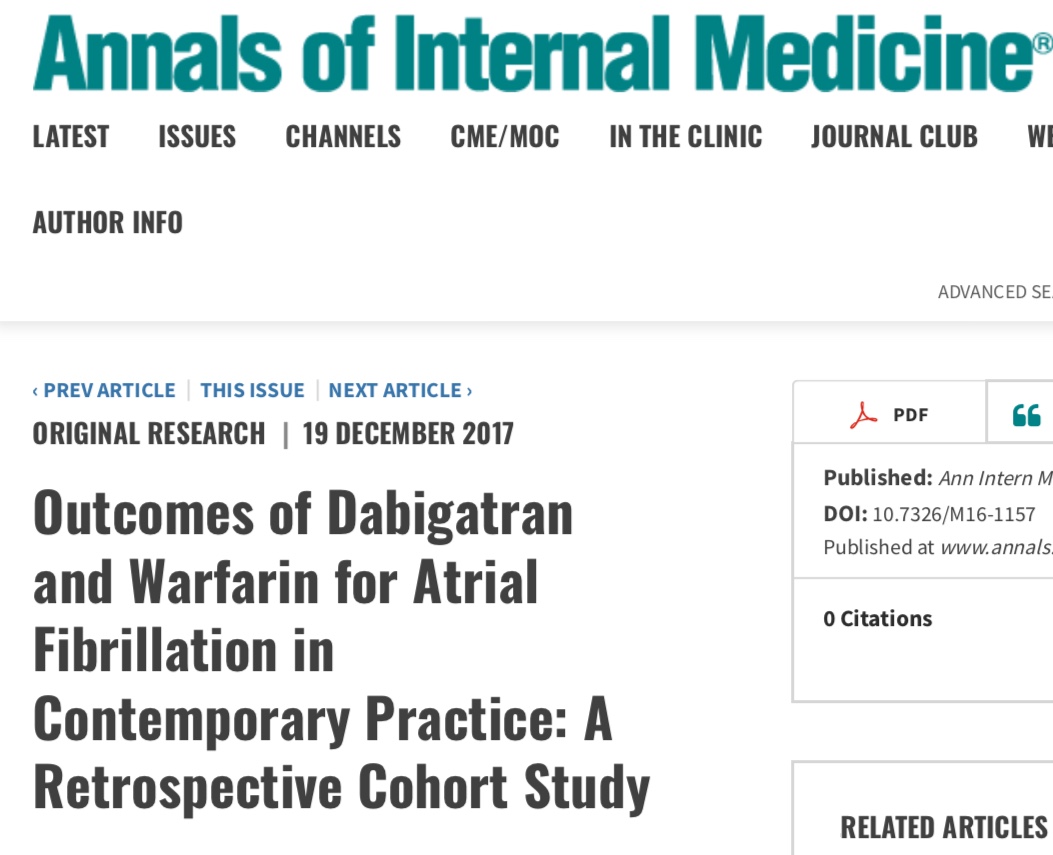 A large retrospective study published last year in the Annals of Internal Medicine compared 25000 patients of non valvular atrial fibrillation on dabigatran to 25000 patients on warfarin in a propensity score matching system. This large study concluded that ischemic stroke were similar in both groups but haemorrhagic stroke were less with dabigatran (0.8% versus 0.4%). Rates of myocardial infarction were again found to be more with dabigatran than with warfarin (0.8% versus 0.4%) . Older people and those with kidney disease had greater GI bleeds with dabigatran. The researchers cautioned that association between myocardial infarction and dabigatran remained unclear, but warrants further investigation. 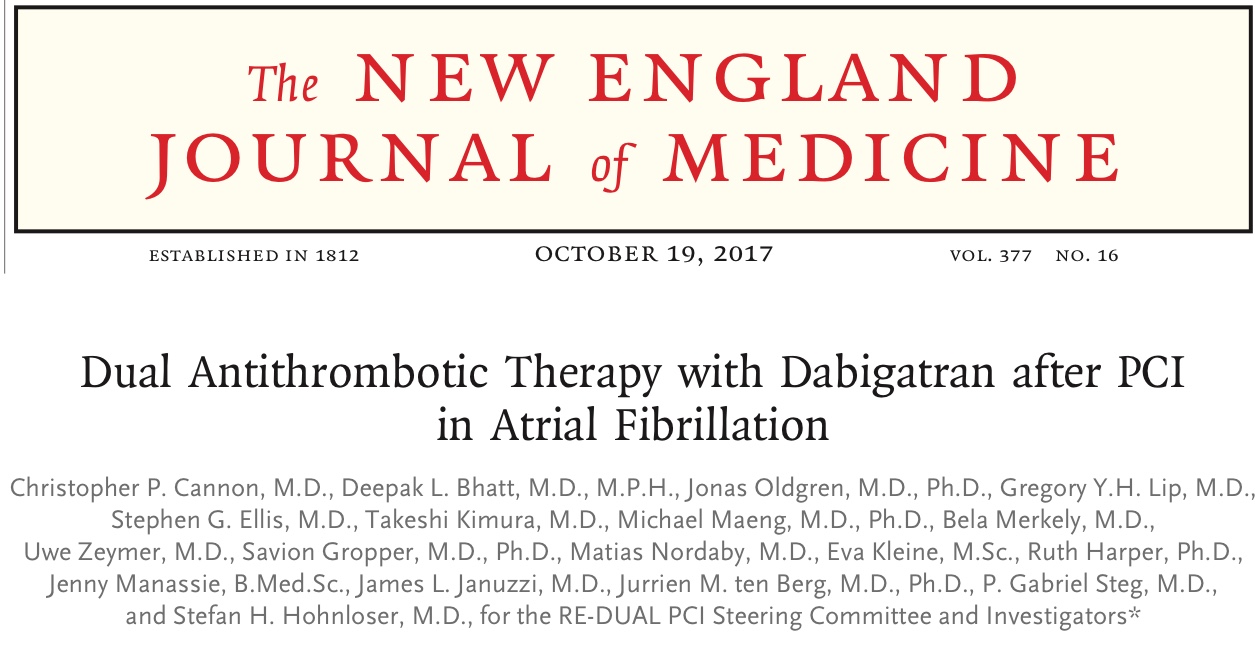 However there was no increase in composite of ischemic events (death, myocardial infarction, sroke) with dabigatran combined with clopidogrel or ticagrelor compared to warfarin triple therapy after PCI in patients with atrial fibrillation.The RE Dual PCI study randomly assigned 2725 patients with atrial fibrillation who had undergone PCI to triple therapy with warfarin plus clopidogrel or ticagrelor and aspirin , or dual therapy with dabigatran plus clopidogrel or ticagrelor. He primary endpoint was a major bleed. Major bleed ing was lowered from 27% in the warfarin triple group to only 15% in 110 mg dabigatran group, and from 27% in the warfarin group to 20% in 150 mg dabigatran group. The CHA2DS2-VASC score was 3.7 in all 3 groups. The HAS BLED score was around 2.7. Almost 25% of patients had history of previous myocardial infarction. Myocardial infarction increased from 3% (warfarin triple therapy) to 4.5% (110 mg dabigatran) , and from 2.9% to 3.4% in the 150 mg dabigatran group. The increase in MI was not significant.

One big advantage with dabigatran is that we have an effective antidote. A monoclonal antibody called idarucizumab (which is available in India) was approved in October 2015 by the US FDA. Dabigatran inhibits thrombin which is one of the later stages in the coagulation cascade. Idarucizumab reverses dabigatran’s anticoagulant effect by tightly binding to dabigatran with an affinity 350 timers greater than thrombin. Studies have shown that idarucizumab almost completely reversed dabigatran’s anticoagulant effect in healthy volunteers aged 65-80 and volunteers 45-80 with mild to moderate renal dysfunction. The reversal lasts for 24 hours. Idarucizumab is given as 2 boluses of 2.5 grams each, within 15 minutes of each other. The 2.5 gm bolus is given over 5 minutes. Adverse events with Idarucizumab are rare and include hypkalemia and headache. 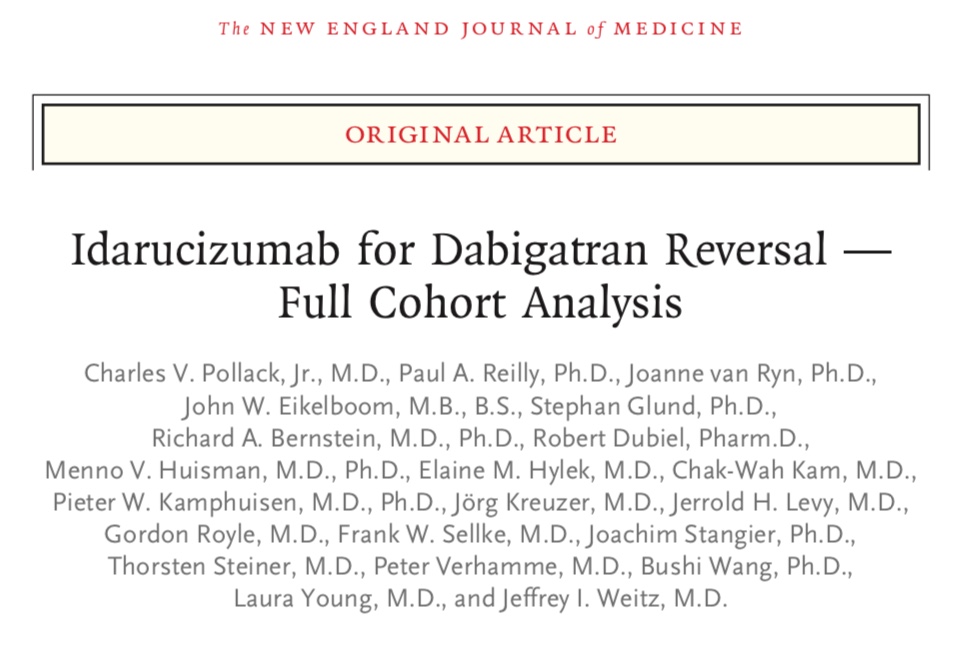 A total of 503 patients with uncontrolled bleeding (group A) and need for emergency surgery (group B) were included in a multicentre trial of idarucizumb. Gastrointestinal bleeding was present in 45% and intracranial haemorrhage in 33% patients in group A. Idarucizumab rapidly and safely reversed the anticoagulant effect of dabigatran in almost all patients (NEJM; 377:431). 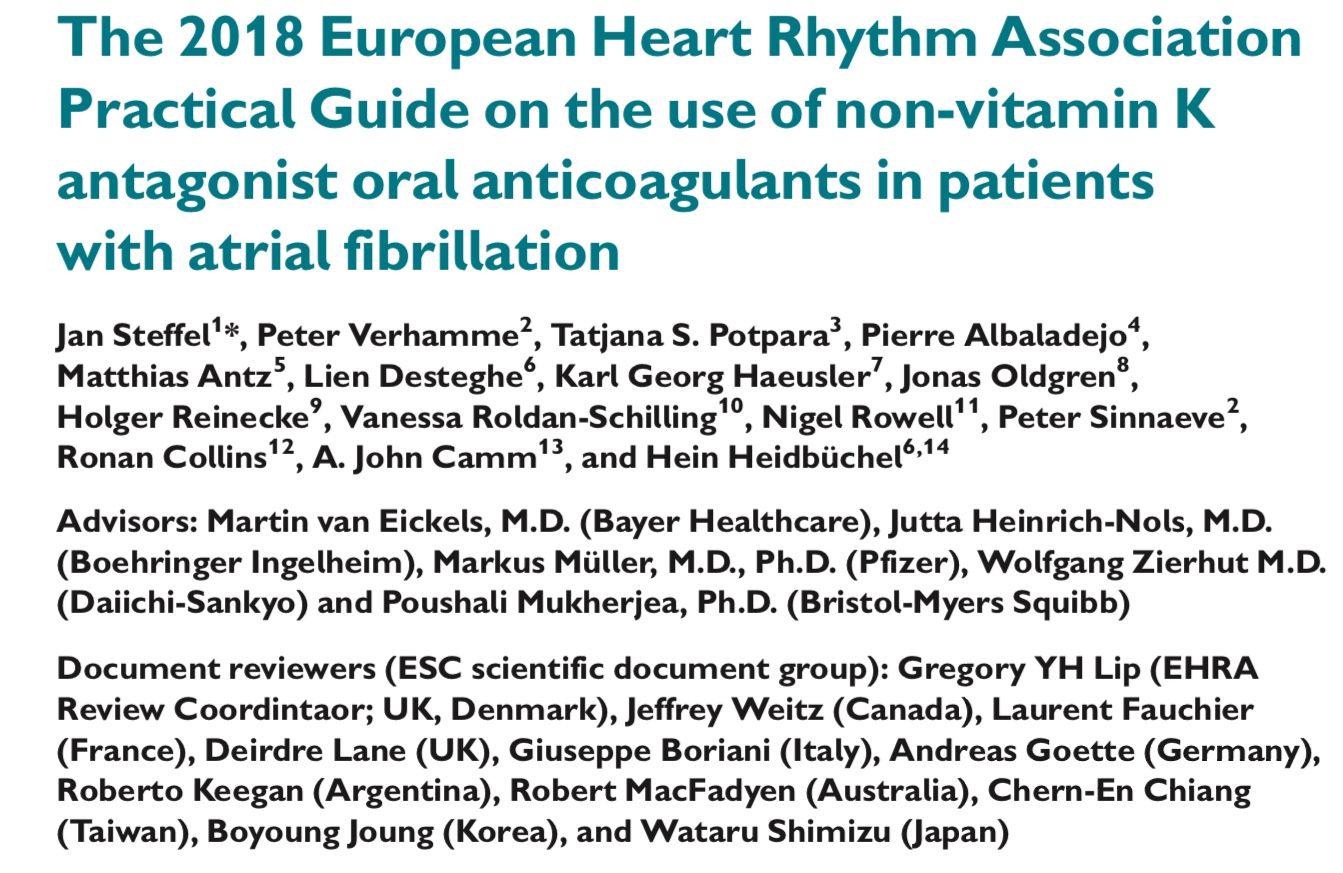