Recently an elegant research paper (JACC 2016;68(7)727-38) has reported clinical outcomes and cardiac magnetic resonance imaging (CMR) in patients with and without diabetes randomized randomized to intracoronary (IC) or intravenous bolus injection of abciximab at the time of primary percutaneous coronary intervention (PPCI). 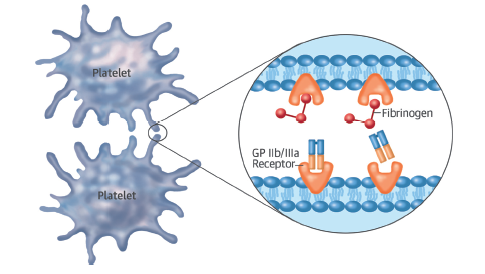 Increased platelet reactivity is fundamental to the predisposition to thrombosis in diabetes and hence it is no surprise that the newer and stronger P2Y12 receptor inhibitors (prasugrel and ticagrelor) and IIb/IIIa inhibitors provide absolute and relative benefit in diabetic versus non-diabetic patients. Intracoronary abciximab has the potential of greater efficacy against platelet activity in thrombus formation during STEMI by immediate and direct onset of action locally at culprit site. Abciximab when given IC as opposed to IV bolus has the potential for more potent action against platelet adhesion. 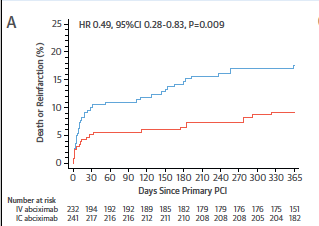 The study included patients with STEMI within 12 hours of symptom onset. Dual anti-platelet therapy consisted of aspirin with clopidogrel (300 to 600 mg loading dose followed by 75 mg daily) or prasugrel (60 mg loading dose followed by 10 mg once a day). Periprocedural anticoagulation consisted of IV unfractionated heparin in all cases. Patients were randomized to receive IC or IV bolus of abiximab (0.25 mg/kg body weight) at time of PPCI. The IC abcixiamb was delivered though the guiding catheter after wiring the infarct related artery. Both IC and IV abciximab bolus were followed by 12-hour infusion of abciximab at 0.125/kg/minute. A 1.5 or 3.0 T MRI scanner did CMR at 1-10 days after STEMI.

Importantly bare metal (BMS) stents were used more often than drug eluting stents (DES); roughly 52% vs. 42%. Thromebctomy was performed in more than 20% of patients. Myocardial salvage index was calculated as myocardial salvage divided by the area at risk.

The main summary of the findings of the study is:

In recent years there has been steady decline in the use of IIb/IIIa inhibitors during PPCI because of concerns of bleeding risks. The American cardiac societies guidelines provide a Class IIa recommendation for use of abciximab and small molecules (tirofiban and eptifibatide). The Europeans limit the use of IV IIb/IIIa inhibitors to bailout conditions or thrombotic complications with a class IIb recommendation. The Europeans have no formal recommendation for IC bolus of abciximab while the ACC/AHA guidelines consider use of IC as Class IIb in selected cases.

The study however could be dated because it used BMS and clopidogrel in the majority of patients. Currently second generation DES are employed during PPCI and either ticagrelor or prasugrel are used as anti-platelets. The total number of diabetic patients was below 500 and therefore not enough to exclude play of chance. We are still unclear of the exact reasons for reduction in stent thrombosis and mortality recorded in this study. Absolute stent thrombosis was unusually low in the IC abciximab group (0.4% vs. 2.3%) in diabetic patients as opposed to diabetic patients treated in the HORIZONS-AMI trial. But Diabetic patients undergoing PPCI in the HORIZONS trial received IV abciximab.

The current study provides the tantalizing prospect of significant lowering of death and stent thrombosis with IC abciximab use during PPCI in patients with diabetes, but this needs to be confirmed by larger trials.