A committee of distinguished Indian cardiologists have to be congratulated for their endeavour in bringing out an Indian perspective on the definition, diagnosis and prevention of contrast induced acute kidney injury ( CI-AKI). The well written manuscript is however severely handicapped by lack of data regarding CI-AKI in Indian conditions. Only one citation from India is provided , which is the Madras Mission Scoring system of risk stratification from a total of 22 references adorning this manuscript. The conclusions drawn by the authors are entirely from Western literature . An Indian viewpoint in the absence of Indian data will have little impact; very much like pace bowling without the assistance of swing, albeit such conditions will favour Indian batsmen in the next 6 weeks of test cricket in England.

Every interventional cardiologist has grappled with kidney injury subsequent to diagnostic angiography or a percutaneous coronary intervention procedure. It can be a nerve shattering experience with considerable morbidity and mortality. Contrast nephropathy is a serious problem that has to be treated judiciously.

The working clinical definition of contrast induced AKI remains an elevation of serum creatinine by a relative 25% or an absolute 0.5 mg% in the 48-72 hours following a procedure. The incidence of CI-AKI ranges from 2%-10% depending upon the study you examine. It has been reported as high as 30% in patients with compromised kidney function at base-line. It is also recognised that there are biomarkers indicating damage to nephrons as early as 6 hours post procedure. These biomarkers indicate kidney damage in the absence of elevated serum creatinine. Neutrophil gelatinase associated lipocalin ( NGAL) and Cystain C are sensitive biomarkers reflecting kidney injury but are currently a trifle too expensive for routine clinical use. The Indian “experts” recommend that iso osmolar contrast is to be preferred to low osmolar contrast in patients with compromised kidneys. Hydration with saline is the best preventive measure against CI- AKI ; and that N acetylecysteine (NAC) should be upgraded to recommendation 2A from 2 B.

The 2 most important papers on CI- AKI published in 2017 seem to have completely escaped the notice of the Indian committee. Both papers have been acknowledged as t highlights of research conducted in 2017 in acute coronary syndrome by the European Society of Cardiology. It is well recognised that CI-AKI is a consequence of the administration of intravascular iodinated contrast media use during radiological procedures and PCI. The mechanism is supposed to be direct nephrotoxicity by free radicals or renal vasoconstriction. Dialysis may be required in more than 5% of patients developing AKI due to contrast. Preventive strategies continue to be unclear because trials done in the past included variable population groups, variability in treatment strategy and end points employed. Crucially these studies were powered for CI-AKI and not for hard endpoints like death or requirement of dialysis. 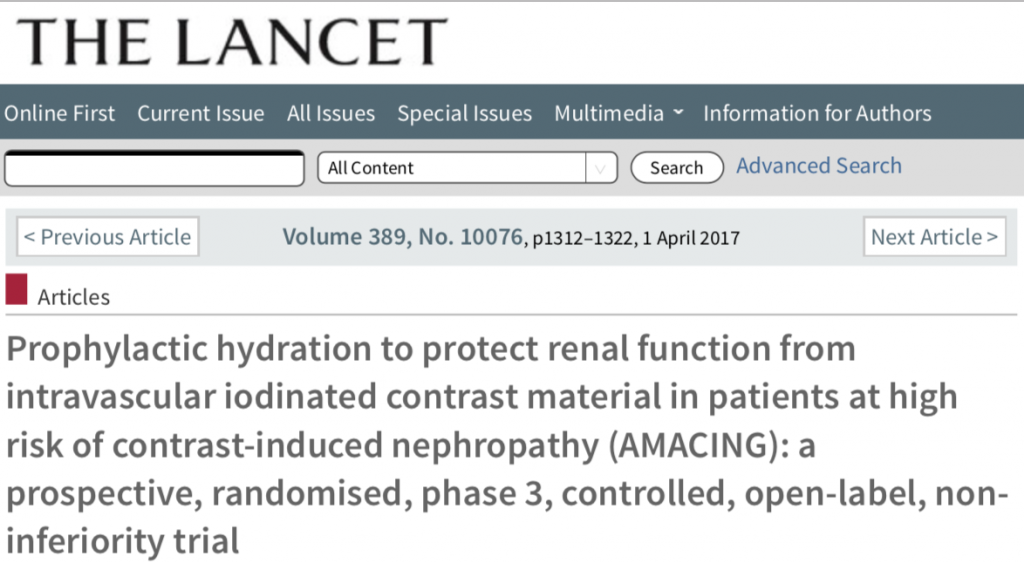 The AMACING trial ( Lancet 2017; 389: 1312-1322) randomised 660 patients at risk for contrast induced nephropathy (estimated eGFR of 30-59 mL per min/1.73 m 2) to receive 0.9% saline as prophylaxis or no prophylaxis. All patients were to undergo procedures needing iodinated contrast media. The primary outcome was incidence of CI-AKI. Serum creatinine was measured immediately before, 2-6 days , and 26-35 days after contrast exposure. Contrast nephropathy was found in 2.7% ( 8 of 296 ) hydrated patients as opposed to 2.6% (8 of 307) patients not given prophylactic saline. There were no cases of death or need for dialysis. Complications associated with saline hydration were seen in 5.5% patients.The researchers concluded that no prophylaxis was non inferior and also cost saving in preventing CI-AKI. The AMACING trial did not find any advantage of prophylactic normal saline in prevention of contrast induced nephropathy.

A large meta analysis too has failed to record efficacy of saline in preventing contrast kidney injury ( Circ Cardiovasc Interv 2017;10:e005262). A total of 124 randomised trials involving 28,240 patients comparing 10 preventive strategies have been included in this Bayesian network meta analysis. The study has recorded that 6 strategies were more effective than saline in reducing risk of CI-AKI. Statin, N acetylcysteine (NAC), NaHCO3, NAC + NaHCO3, xanthine, and ischemic preconditioning were found to be better than saline alone. The researchers found that hydration alone was the least effective while statins the most effective in preventing contrast nephropathy. Nothing worked in patents with diabetes.The meta analysis however has variable sample size (14-3082), variable population studied ( diabetes, acute coronary syndrome, stable angina), studies done over 20 years time span, wide variability in contrast usage and follow up.

It may be argued that saline if given in a targeted manner will provide better results. The usual protocol is a 1 ml/ Kg/ per hour of normal saline infusion given 12 hours before and 12 after the procedure with contrast media exposure. In the POSEIDON trial ( Lancet 2014;383:1814-23) saline infusion was targeted to left ventricle end diastolic pressure. The usual saline protocol resulted in infusion of 800 ml, but left ventricle end diastolic pressure targeted saline needed as much as 1700 ml of saline to be infused, reducing CI-AKI by almost 60% ( 7% versus 16%). Saline hydration can also be targeted using central venous pressure.

The problem with targeted saline infusion is that it may become cumbersome for an interventional cardiologist to treat a patient with acute coronary syndrome. You are already entirely focussed on the intervention treatment , and may not be in a position to be burdened by targeted hydration protocols.There is no time for prophylactic saline infusion in the setting of an acute ST-segment elevation myocardial infarction. Giving a litre of normal saline infusion or even for that matter providing oral hydration carries considerable risk in a patient of acute coronary syndrome with impaired systolic left ventricle function. The risk would remain the same in patients with left ventricle diastolic dysfunction, and there are many such patients. A patient on the Cath lab table slipping into pulmonary edema during a PCI procedure can be a daunting task, even for the most experienced operator. Oral hydration carries the risk of vomiting by the patient while on the cath table, another sticky complication dreaded by operators. Deploying a stent requires precision, and this can easily be compromised in a patient who is retching on the cath table.

Apart from statin therapy, the meta analysis reveals that NAC alone or combined with NaHCO3 significantly reduced contrast induced kidney injury as compared to saline alone. Even NaHCO3 used alone was superior to saline hydration. Routine use of NAC or NaHCO3 however is not supported by data from large randomised trials.

The PRESERVE trial GROUP compared intravenous NaHCO3 to intravenous saline and oral NAC to placebo in more than 5000 patients with compromised kidney function; eGFR less than 60 ml/min/1.73 m2. The study also included patients with eGFR <30 ml/min/1.73m2. The researchers concluded that in patients with impaired GFR undergoing angiography three was no difference in death or need for dialysis in patients assigned to soda bicarbonate as compared to saline; neither did NAC show any benefit over placebo (N Engl J Med 2018;378: 603-614). There was no difference in decline in kidney function at 90 days. Rate of acute kidney injury was 9% in the trial. High risk patients were not included in the trail while the majority of procedures were diagnostic. We have a large randomised trial recording no benefit with NaHCO3 nor with NAC as recently as February 2018, but the Indian committee has decided to upgrade NAC from 2B to 2A !

How does one tackle a patient with acute coronary syndrome who also has impaired renal function? Short term high dose statins do have a role in preventing CI-AKI. There is no discernible difference between iso-osmolar or low osmolar contrast agents. Common sense mandates usage of as little contrast as possible during a procedure. Adequate hydration has always appeared intuitively plausible but these 2 recent publications are not too enthusiastic. AMACING clearly did not find any advantage of saline hydration versus no hydration in patients administered intravascular contrast agents. The Indian committee of cardiologist’ perspective on contrast induced kidney injury seems to have neither pace nor any swing.