Treating a patient with shock can be an extremely daunting task for any clinician. Shock is a common reason for admission into an intensive care unit. Shock is accompanied with low blood pressure that is invariably raised by vasopressors and inotropes. Two thirds of patients entering an intensive care unit septic shock, which is a distributive type of shock. Other albeit uncommon causes of distributive shock are drug/toxin induced, anaphylactic shock, endocrine shock (Addison crisis) and neurogenic shock. Every protocol on spec shock mandates administration of norepinephrine at 0.2 mcg/kg/min (recommneded first line) and if need be vasopressin at 0.3 units /min. Norepinephrine can be combined with epinephrine, both having combined vasopressor and inotropic effects. The latest vasopressor to be found effective is angiotensin II. Angiotensin II acts by Gq protein stimulation in vascular smooth muscle. The ATHOS -3 (N Engl J Med 2017;377:419-30) randomised trial comparing angiotensin II with placebo in 344 patients with vasodilatory shock (80% had sepsis), showed that significantly more patients had their mean blood pressure raised more than 75 mm Hg at 3 hours with angiotensin II than placebo against background conventional vasopressor therapy ( 70% versus 23%). It must be noted that all these patients were suffering from vasodilatory shock defined as cardiac index greater than 2.3 litresb per minute per square meter or as central venous oxygen saturation greater than 70% coupled with central venous pressure more than 8 mm Hg, with mean arterial pressure between 55 and 70 mm Hg.

Cardiologists on the other hand are confronted with cariogenic shock where low blood pressure is a result not of dilated peripheral arteries but inability of the heart to pump adequately. Poor pumping of the heart is usually due to acute myocardial infarction, and in other instances due to mechanical failure (valvular dysfunction, ventricular septal defect, atrial myxoma), and arrhthmias. Initial treatment includes inotropic support with dobutamine and vasopressor support with norepinephrine. Vasodilatory shock by itself is very difficult to treat, but cariogenic shock is even more so because of the fact that too much vasopressor administration can be detrimental to the already struggling heart. No sweet spot has so far been determined for vasopressor/inotrope dosage, and hence patients of cariogenic shock will need supportive treatment consisting of the intraaortic balloon pump (IABP), Impella, or extracorporeal membrane oxygenation (ECMO).

Mortality in cardiogenic shock despite all above measures is staggeringly high. More than 40% patients are dead in 30 days and more than half treated patients die within 6 months to one year. Also there are high rates of readmission for survivors of cardiogenic shock. Cardiogenic shock is well defined as bold pressure below 90 mm Hg accompanied with pulmonary congestion plus at least one characteristic of reduced perfusion: urine output less than 30 ml per hour, cold clammy skin, altered sensorium or lactate level greater than 2 mmol/L. 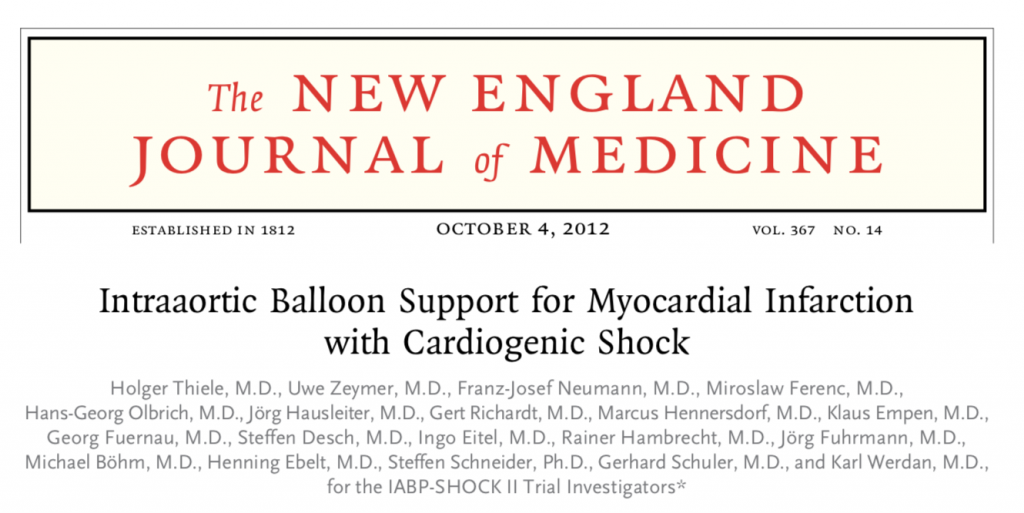 Importantly there are NO randomised controlled trials in acute or chronic heart failure complicated by shock. Data from trials on acute myocardial infarction shock cannot and should not be extrapolated to these patients. It should be appreciated that it is quite difficult to do do randomised trials using different modalities in patients of cardiogenic shock. Keeping in mind the AMI-SHOCK trial data the 2013 ACC/AHA guidelines on management of cardiogenic shock give use of IABP a class IIa recommendation in patients with ST elevation myocardial infarction who do not stables on drug therapy. The European cardiology society 2017 guidelines do not recommend routine intra aortic balloon pump (Class III recommendation) use but permit IABP use in patients of cardiogenic shock with haemodynamic instability or mechanical complications.

Cardiogenic shock is both complex and challenging, with high mortality and readmission rates. The intraaortic balloon deflates in systole and rapidly inflates during diastole. By inflating in diastole the Intra aortic balloon augments systemic pressure in diastole and thereby raises blood flow into the coronary arteries. This increases oxygen supply to the heart while peripheral resistance is lowered with deflation of the balloon. On the whole by increasing coronary artery blood flow and reducing peripheral resistance/afterload some respite is provided to the failing heart. There is also increase in the cardiac output, but this is between 0.5 L and 1 L/ minute.

The Impella device has been around for some time. It can be inserted percutaneously. The device is positioned in the left ventricle cavity where it pulls blood though an inlet near the tip and expels blood from the catheter into the ascending aorta. The Impella is inserted percutaneously via the femoral artery. It has become an alternative to the IABP but usage even in the US is less than 3 % of patients with cardiogenic shock. Cardiogenic shock affects nearly 50,000 patients each year in the United States, mortality is approximately 40% despite attempts to restore cardiac output with inotropes, vasopressors and hemodynamic support devices. Hemodynamic support devices such as the intraaortic balloon pump and percutaneous assist devices (pVAD) such as the Tandem Heart and the Impella have been used as a bridge to recovery in patients with AMI-shock and those who underwent high risk percutaneous coronary intervention. Once again there have been very few randomised trials comparing IABP with the Impella, with none demonstrating significant difference in survival.

It has been difficult explaining why these devices have not been particularly effective in cardiogenic shock. Maybe apart from reduced cardiac output we have been unable to tackle the systemic dysregulated inflammatory response triggered during cardiogenic shock.

The IMPRESS in SEVERE SHOCK trial randomised trial 48 patients with severe cardiogenic shock complicating AMI to the Impella or IABP. All patients had systolic blood pressure less than 90 mm hg or the need for inotropic or vasopressor support plus need for mechanical ventilation.

Extracorporeal membrane oxygenation (ECMO) too has not shown significant survival advantage in randomised trials in patients with severe respiratory failure. Similarly no improved survival has been shown with ECMO in cardiogenic shock. ECMO is contraindicated in patients provided prolonged cardiopulmonary resuscitation, aortic dissection and those patients with cancer metastasis.

The percutaneous Impella pl;platform consists off 2 devices ; Impella 2.5 that has maximum output of 2.5 L/min and Impella CP with maximum output of 3.7 L/min. In acute settings Impella insertion is feasible and provides greater hemodynamic support than the IABP. But 2 small randomised trials failed too show any advantage of Impella over IABP in clinical outcome; one trial was in fact stopped prematurely. The ISAR -SHOCK that randomised 26 patients with cardiogenic shock did not show any difference in mortality (overall mortality was 46% in both groups (J AM Coll Cardiol 2008;52: 1584-8). The other trial was called IMPRESS in STEMI; patients were randomised between Impella 2.5 and IABP;the trial had to be stopped prematurely due to lack of enrolment after 21 patients had been enrolled (Int J Card 2016;202:894-6).

The IMPRESS in SEVERE SHOCK trial (J Am Coll Cardiol 2017;69: 278-87) is the largest randomised trial comparing Impella with IABP, albeit consisting of less than 50 patients. But all patients were on mechanical ventilation. It also the only trial to use Impella CP device. Crucially, in the IMPRESS in SEVERE Shock trial around 92% of patients included were cardiac arrest survivors. In addition almost half the patients had time of restoration of spontaneous circulation (ROSC) longer than 20 minutes.

A registry on post cardiac arrest survivors that compared Impella 2.5 with IABP reported similar mortality of around 78-79% (Resuscitation 2013;84:609-15).

In conclusion despite the promise of better mechanical circulatory support by the Impella, randomised data is lacking. Undoubtedly adequately powered randomised clinical trials are needed to ascertain the value of the various mechanical support modalities in the setting of cardiogenic shock. In the real world an institution will serve the patient best by employing the device that is available in the cath lab and the one that personnel are familiar with.