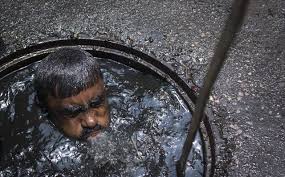 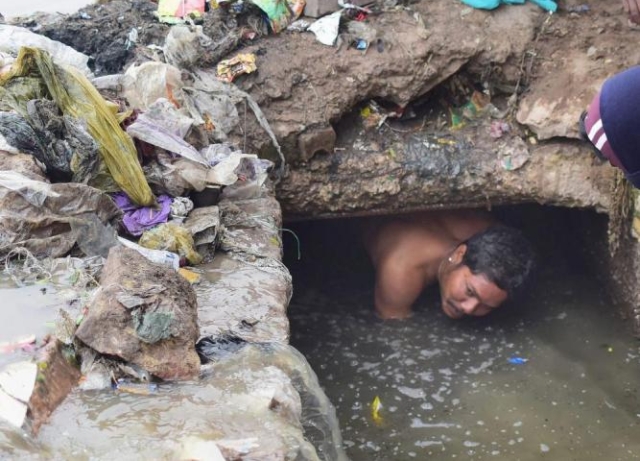 Now that Gandhi Jayanti is over here are some charming facts regarding the tribe called “manual scavengers”. Apparently they have existed a,ingest us for generations, in fact have been considered a vital and essential component of the Indian social fabric. The manual scavengers responsibility is to engage directly with human excreta. He ensures sewers are kept operational in the towns of our land. He also is entrusted to tackle septic tanks, manholes and of course sort out dry latrines across the length and breadth of the country. There are thousands of them, more than 50,000 as per official records. A New York Times report placed the figure at 300,00 if not 900,000! More than 800 have died in the last 2 decades. These are conservative figures. Some responsible agencies go to the extent of stating that a manual scavenger dies every fifth day. This may or may not be an exaggeration, but pictures speak for themselves. There will be a young able bodied male entering or exiting a sewer/ man hole with absolutely no protective gear. Deaths are because of poisonous gases produced in sewers. The main stream media including TV channels provide scanty information, they barely scratch the surface. Little wonder there is little or no outrage over the delightful job of engaging with human excreta in the twenty first century. India has the unique distinction of nurturing this band of men. There numbers have actually increased in some North Eastern states including West Bengal. Maximum deaths have occurred in Tamil Nadu, and now hold your breath , the silver medal winning state is Gujarat. Almost 18,000 crore rupees are spent per year in the Swachh Bharat Abhiyaan project, but less than 63 crores were provided by the government for the rehabilitation of our sewer gladiators in the last 4 years. Ironically publicity money for the Swachh Bharat Abhiyaan project ( electronic and print media) during this time exceeded 500 crore rupees. There was recently an uproar in the BBC when a breakfast TV host of Indian origin expressed her anger and frustration on being a target of racism in the UK. The BBC management in its infinite wisdom reprimanded her for disclosing personal views, but was promptly attacked by numerous British journalists for its bigotry. It struck me whether these manifestly decent journalists had any clue about our sewer gladiators who handled excreta possibly with bare hands on a daily basis, without the slightest whisper from the community at large. There is stunning insensitivity where manual scavengers are concerned, one could go further to say there is tacit approval by society. This stunning acquiescence is embedded in culture, for the volunteers to tackle dry latrines and blocked sewers come from a particular section of Indian people. A recent report describes 3 gladiators dying one after the other while tackling a sewer, there was no one prepared to give them water as they were dying(scroll.in). What can be more horrific than this? That Justin Trudeau may lose the next Canadian election because of the crime of polishing his face black is laughable. Canadian, or for that matter the Brits have absolutely no idea of the systemic debasement inflicted on fellow humans in this part of the planet. Mr. Bill Gates are you listening? Indian scientists have an orbiter encircling our moon right now, it shall do so for some years. Very soon they will surely drop a rover on its surface too. They almost did it last month. “Vikram” the rover named after the famed scientist Mr. Vikram Sarabhai travelled nearly almost 380,400 km or more from earth; thats quite a brilliant feat. Less than a handful of nations have achieved that. It is odd to say the least that we are incapable of producing robotic devices that can replace the manual scavenger. Why on earth is there no directive issued to our engineers to construct a robotic system that can clear sewers and man holes of this country ? The Supreme Court has definitely prohibited employment of manual scavengers, this came about as recently as 2013, but this is a toothless law, which is conveniently gone around by Indian culture. Is a sustained media campaign needed to sensitise the general public on this subject? There is little money to be gained from it and also possibly meagre fame. We don’t even have canaries to check out toxic sewers; maybe the first manual scavenger to enter a pit serves as the canary in the mine. There are no middles in national newspapers on this scented subject. Unremarkably no Bollywood icon or corporate honcho has uttered a word.

So we now have a charmingly odd situation. We can launch satellites, attempt a robotic landing on the moon’s surface, and also develop an intercontinental ballistic missile that can cover more than 5000 kms. We call it the “Agni V”. The intent is to keep Beijing in sight. We are the only country apart from the US, Russia, China and North Korea with such advanced ICBM’s. Moreover more than $130 billion is to be spent in modernising our armed forces in the coming 4 to 5 years. This is above and beyond the I.6% of the GDP allocated to defence this year; about 3.2 lakh crore Rupees. But, astonishingly we don’t seem to have a roadmap to eliminate the job of the manual scavenger in this country. The sweeping absence of flush toilets and sewer lines in this country ensures that a particular community is compelled to clean up other people’s excreta with their bare hands. No law however stringent shall eradicate this dehumanisation… till we develop a mechanised way to do this work.