It ia an established fact that an ST-segment elevation myocardial infarction (STEMI)is due to rupture of an atherosclerotic place and the resultant platelet rich thrombus that completely blocks the coronary artery. By 2003 based upon 23 randomised trials it had become clear that primary percutaneous coronary intervention (PPCI) resulted in significantly fewer deaths, re-infarction, and stroke, as compared to fibrinolysis or thrombolytic therapy. PPCI is superior because of greater achievement of TIMI 3 antegrade flow than thrombolysis and stabilisation of the ruptured plaque. There are less chances of a re-infarction, greater salvage of myocardium and significantly fewer intracranial bleeding with PPCI as compared to thrombolysis. PPCI therefore has become the treatment of choice for STEMI if done in time and by experienced operators.

Experimental studies indicate that amount of myocardial salvage depends on the speed in which the occluded coronary artery is opened up; the sooner PPCI is done the greater the benefit. Hence the cardiac adage “ time is muscle.” Cardiologists became greatly interested in a combination strategy of thrombolysis followed by PCI or “ facilitated PCI.” Facilitated PCI was also called “pharmaco-invasive PCI” by some. It was theorised that by administering a thrombolytic agent as early as possible after symptom onset there would me more infarct related arteries open to some extent by the time PCI was attempted in the cath lab. However early studies combining thrombolytic therapy with immediate PCI reported increased rates of death, coronary occlusion and hemorrhagic complications. The biggest dampener was the ASSENT-4 PCI trial (Lancet 2006;367:569) that randomised 4000 patients of STEMI less than 6 hours duration to PPCI or to standard PCI soon after full dose tenectaplase. All patients got aspirin and a bolus of unfractionated heparin. The safety monitoring board had to abort the study because of significantly greater stroke during hospital stay, reinfarctiron and repeat target vessel revascularisation within 90 days in the study group. The researchers concluded that full dose tenectaplase with thrombolytic co therapy (preceding PCI by 1-3 hours) cannot be recommended.

In the same issue of the Lancet (2006;367:579-588) a review of randomised trials comparing primary and facilitated PCI for STEMI was published. The authors identified 17 trials of STEMI that included a little more than 4500 patients of STEMI. Despite 2-fold increase in the number of patients with TIMI 3 flow in the facilitated PCI group compared to the PPCI group, there was significantly more mortality, re-infarction and urgent target vessel revasularisation. Facilitated PCI was associated with higher rates of major bleeds. The conclusion drawn was that facilitated PCI offers no benefit over primary PCI in the treatment of STEMI, and should be actually avoided. The meta analysis which included data from the ASSENT-4 PCI trial, showed that increased mortality was restricted to studies that used full dose thrombolytic therapy as part of the facilitated strategy. The FINESSE trial randomly assigned 2453 patients in a 1:1:1 treatment allocation to half dose reteplase with abciximab (GP 2b/3a inhibitor), abciximab alone or to primary PCI. At 60-90 minutes patients assigned to facilitated therapy had more ST segment resolution and more patent arteries with TIMI 3 flow before PCI. These benefits however did not translate to lesser death, heart failure, or cariogenic shock through 90 days. There was increased intracranial haemorrhage and significantly more major bleeds in the facilitated PCI groups.A patent artery does not guarantee myocardial perfusion. In fact even though 90% of patients may have TIMI 3 flow after primary PCI, only 29 % have normal myocardial perfusion. Potential explanations for impaired myocardial perfusion despite an open infarct related coronary artery may be distal embolisation of atherosclerotic debris, capillary edema, myocardial edema compressing microvasculature, and plugging by inflammatory cells.

There has however been a remarkable turnaround with the concept of facilitated PCI in recent years. The European Society of Cardiology in its guidelines of late 2017 recommends facilitated PCI based upon recent randomised trials comparing facilitated PCI with PPCI. Better result reported by recent trials may be because earlier trials did not have the luxury of the more powerful P2Y12 inhibitors, drug eluting stents, and GP 2b/3a inhibitors. A patient level analysis of randomised early routine invasive clinical trials that assessed the optimal timing of coronary angiography after thrombolysis included 6 randomised trials. Median time to angiography was 165 minutes and median symptom onset to angiography was 5.3 hours. The primary end point was death or re-infarction. The secondary endpoint was major bleeding in hospital. Very early angiography (<2 hours) after thrombolysis was not associated with increased death, reinfarctiron or major bleed. Angiography done within 4 hours of thrombolysis resulted in fewer death/re-infarction at 1 year, and lesser 30 day recurrent ischemia. The authors concluded therefore that contemporary practice should entail transfer of every patient given thrombolytic therapy for angiography and PCI be performed if need be ( J Am Coll Cardiol Intv 2015;8:166-74).

The European guidelines elaborate that thrombolytic is an important repercussion strategy when primary PCI cannot be performed in a timely manner. Thrombolytic treatment is recommended within 12 hour of symptom onset if primary PCI cannot be performed within 2 hour of diagnosis of STEMI. If the patient presents later than 3 hours of symptom onset then greater emphasis should be given to primary PCI.The European guidelines recommend that following initiation of thrombolytic therapy the patient be transferred to a PCI centre. In case of failed thrombolysis or in the event of re-occlusion/re-infarction immediate angiography and rescue PCI is indicated. Re-administration of thrombolytic agent is not effective and should be avoided. A strategy of “watchful waiting” in which angiography and PCI are indicated only in patients with spontaneous or induced severe schemia or LV dysfunction, or those with a positive ischemic test in the out patient is not recommended by the 2017 European guidelines. Randomised trials and meta-analysis have shown benefits of early routine PCI after thrombolysis without increase in risk of major bleeding or stroke. A time window of 2-24 hours after successful lysis is recommended. The European guidelines therefore give transfer to a PCI capable centre following fibrinolysis of all patients immediately after thrombolysis a class I recommendation. Also angiography and PCI of infarct related artery if indicated is recommended between 2 and 24 hours after successful thrombolysis is given class I recommendation. 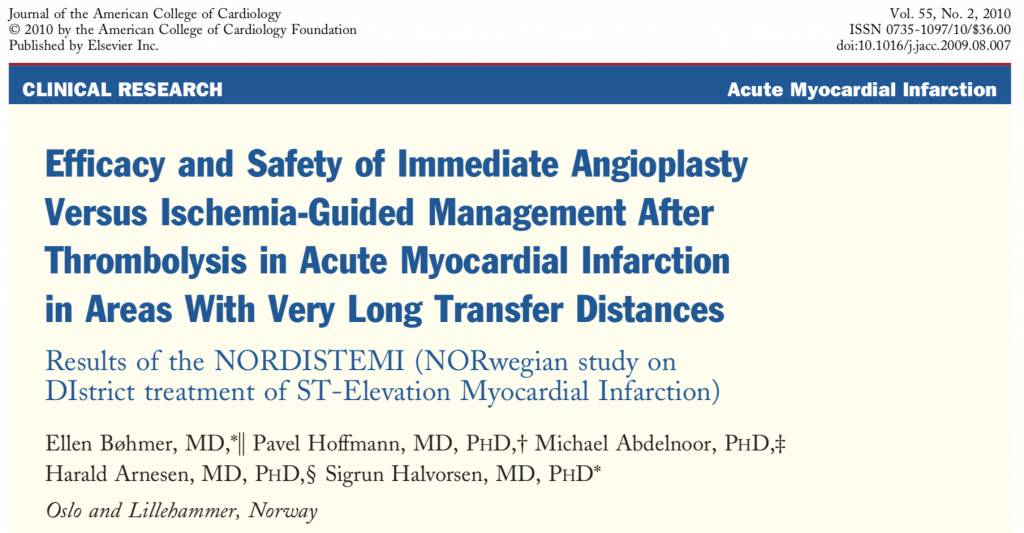 The NORDISTEMI trial has influenced the European guidelines. A total od 266 rural STEMI patients were treated with tenestaplase, aspirin, clopidogrel and enoxaprin and randomised to standard treatment in local hospital with early transfer only if indicated for rescue or clinical deterioration or immediate or immediate transfer to a PCI centre. Immediate transfer reduced rate of death, re-infarction, or stroke at 12 months in patients treated with thrombolysis and clopidogrel in ares of long transfer distances (J Am Coll Cardiol 2015;55:102-10). 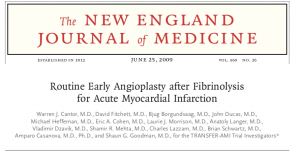 Prehospital thrombolysis in the STREAM trial ( N Engl J Med 2013; 368:1379-87) with timely angiography resulted in effective reperfusion with prehospital thrombosis in patients with early STEMI who could not undergo primary PCI within1 hour after first medical contact. Thrombolysis was associated with increased risk of intrcranial bleeding. Patients of STEMI (1892) who presented within 3 hour of symptom onset but were unable to undergo primary PCI within 1 hour, were randomly assigned to primary PCI or thrombolysis with tenectaplase (with colopidogrel, enoxaparin). Emergency angiography was done if thrombolysis failed or otherwise 6 to 24 hours after randomisation. The TRANSFER -AMI trial ( N Engl J Med 2009;360:2705-18).showed that among high risk patients of STEMI, transfer for PCI within 6 hours after thrombolysis was associated with significantly fewer ischemic complications than with standard treatment consisting of rescue angioplasty or delayed angiography. In the TRANSFER-AMI trial STEMI patients were given thrombolysis and then immediately transferred to a PCI capable centre. Primary endpoint of death, reinfarctiron, recurrent ischemia, heart failure or cariogenic shock was significantly less in the immediate transfer group as compared to the standard group. There was no difference in bleeding. A patent artery does not guarantee myocardial perfusion. In fact even though 90% of patients may have TIMI 3 flow after primary PCI, only 29 % have normal myocardial perfusion. Potential explanations for impaired myocardial perfusion despite an open infarct related coronary artery may be distal embolisation of atherosclerotic debris, capillary edema, myocardial edema compressing microvasculature, and plugging by inflammatory cells.

Primary PCI, if available is the best treatment for STEMI. Primary PCI is better than facilitated PCI; but if a centre does not have PCI facilities it should provide thrombolysis treatment within 2 hours of symptom onset, and up to 12 hours from symptom onset keeping in mind that myocardium salvage lessens with each passing hour beyond 2 hours with a thrombolytic agent. Subsequent to thrombolysis the best approach is shifting the patient to a PCI capable centre regardless of success or failure. “Watchful waiting “ after thrombolysis in patients with STEMI is no longer recommended.