Antiplatelet therapy is the bedrock of percutaneous coronary intervention (PCI). A combination of aspirin combined with a P2Y12 inhibitor is given orally to the patient for a duration of at least 12 months subsequent to deployment of a drug eluting stent (DES). Recently some studies have shown equal efficacy when dual anti platelet therapy (DAPT) is provided for as little as 3 months with second generation DES. In terminational guidelines recommend ticagrelor or prasugrel as class 1, with clopidogrel to be administered if the former are not available or not tolerated. Clopidogrel remains as the anti platelet of choice in India, because of lower cost and ease in procuring the medicine. Clopidogrel, however is a prodrug, which means that a liver enzyme called CYP2C19 is needed to activate it. Clopidogrel is able to prevent platelet aggregation only after it is converted to its active metabolite by CYP2C19.

It is also well known that a considerable fraction of patients have genetic variants of CYP2C19, that render the patient unable to activate clopidogrel to its active form. These patients remain at risk for stent thrombosis, death, myocardial infarction and stroke due to insufficient clopidogrel induced platelet inhibition. A number of alleles (or variants) of CYP2C19 have been identified. The enzymatic activity of CYP2C19 can be decreased, increased, or remain normal depending on the allele carried by the patient.

It is therefore no surprise that patients of acute coronary syndrome with the 2* allele (of CYP2C19), treated with clopidogrel experience a 1.5 fold increase in risk of death, myocardial infarction and stroke in 1 year follow up as compared to patients who were non carriers. The highest risk seems to be in patients of ST segment elevation myocardial infarction below the age of 45 years; they have a 3 fold increased risk of death, myocardial infarction, and stroke if they are carriers of the 2* variant. In addition to an increased risk of this composite end point the incidence of stent thrombosis is increased 3 to 6 fold in carriers of at least one 2* allele. Individuals of 2 copies of 2* allele are at greater risk than those patients with only one copy. Remember one individual can inherit 2 copies, one copy from each parent. There are currently no guidelines recommending routine use of genetic testing to guide clopidogrel treatment, but it may be worthwhile obtaining genetic profile of ones patient to provide the right dose or repack clopidogrel with the more powerful ticagrelor or parsugrel.

Recently we had to manage a 64 year old male whom presented with severe chest pain accompanied by ST segment elevation in the chest leads. He had undergone stenting in his left anterior descending coronary artery and had been put on DAPT consisting of aspirin 75 mg along with clopidogrel 75 mg. Crucially he was taking his medicines. Clinically stent thrombosis was suspected, which was confirmed on coronary angiography. He was managed with balloon angioplasty and intracoronary tirofiban bold followed by 20 hours of intravenous infusion. He was discharged in stable condition on prasugrel plus aspirin. 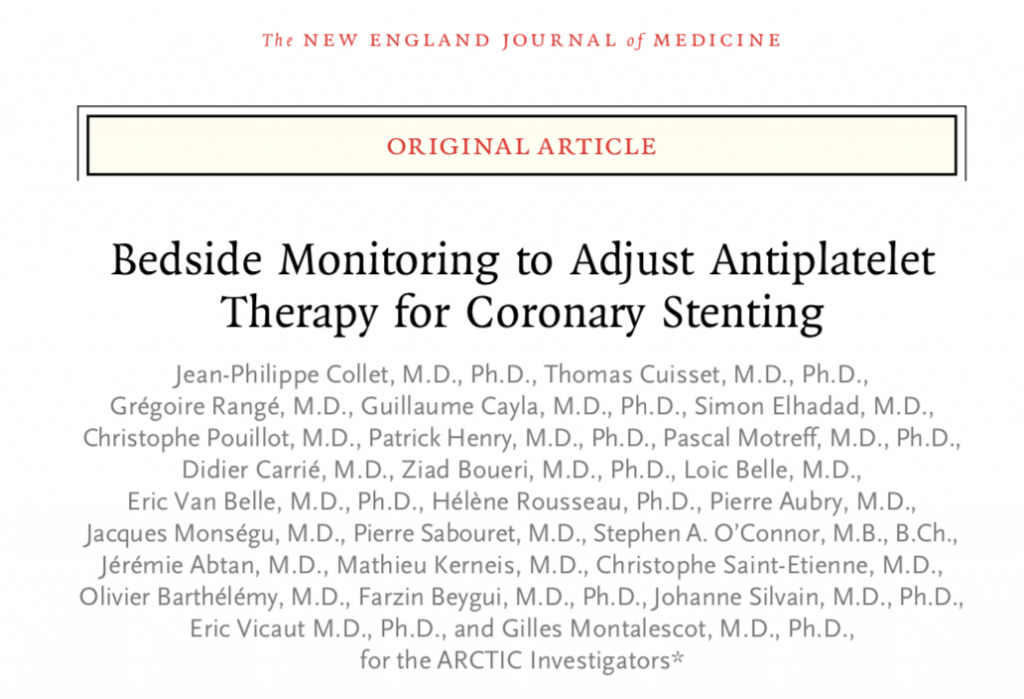 Intuitively this patient should have undergone genetic testing or at least some form of platelet reactivity testing. The problem is that 2 large randomised trials testing bedside monitoring failed to improve clinical outcomes. The ARCTIC Trial (N Engl J Med 2012; 367: 2100-9) assigned 2440 patients scheduled for PCI to a strategy of platelet function monitoring with drug adjustment in patients with poor response to antiplatelet therapy or to usual treatment without monitoring and drug adjustment. The primary endpoint was a composite of death, myocardial infarction, stent thrombosis, stroke or urgent revasularisation. The VerifyNow device was used to fo check platelet reactivity before stent implantation and later at 2-4 weeks.

In the event of high platelet reactivity with clopidogrel necessitated an additional loading dose of clopidogrel (equal or > 600 mg) or prausgrel (60 mg) and administration of IIb/IIIa inhibitor, before the stenting procedure, followed by daily maintenance dose of 150 mg of clopidogrel or 10 mg of prasugrel post procedure. The antiplatelet treatment was unchanged in patients with an adequate response. The protocol called for intravenous aspirin if platelet reactivity was seen to be high on aspirin.

Interestingly the primary endpoint occurred in 35% of patients in the monitored group as compared to 31% in the conventional treated group. There was no significant clinical difference by assessing platelet reactivity and enhancing treatment if needed as compared to conventional antiplatelet treatment in patients undergoing coronary stenting. The researchers concluded that their data did not support routine use of platelet function testing in patients undergoing coronary testing.

This week’s JACC (J Am Coll Cardiol 2018;71:1869-77) carries a paper on a pahmacogenomic approach to select antiplatelet treatment in patients with acute coronary syndrome. The goal of the research was whether selecting antiplatelet therapy (clopidogrel,ticagrelor or prasugrel) on the basis of a patients genetic characteristic leads to better clinical outcomes as compared to standard treatment. Almost 900 patients hospitalised for acute coronary syndrome were randomly assigned to the pharmacogenomic arm or to standard treatment. In the pharmacogenomic arm the genetic profile was determined, which included genotyping of CYP2C19 (2*) and CYP2C19 (17*) using a system that provided data in 70 minutes at bed side. Patients were followed for 12 months for the primary composite endpoint of cardiovascular death, myocardial infarction, stroke3 and major bleeding. The primary end point was reduced from 26% in standard care arm to 16% in the genotyping group (p <0.001). The authors concluded that a personalised approach to selecting antiplatelt treatment for ACS patients may reduce ischemic and bleeding events. Clopidogrel was used more frequently in standard arm (51%), ticagrelor in the pharmacogenic arm (43%) and prasugrel was used equally in both groups.

To conclude, clopidogrel has a slow onset of action and the extent of its antiplatelet activity varies among patients, and of course its antiplatelt effect is modest. No wonder prasugrel is superior in patients of ACS undergoing PCI, while ticagrelor is more effective than clopidogrel in patients with ACS undergoing PCI or medical treatment. Both prasugrel and ticagrelor increase major bleeding by 0.5% albeit ticagrelor does not increase fatal bleeds. Ticagrelor however can cause breathlessness and bradycardia. Generic versions of clopidogrel and prasugrel are available. We know that randomised studies of platelet function testing have failed to show improved clinical outcomes. But it does make clinical sense to check for CYP2C19 genotype variants and treat accordingly with a higher dose of clopidogrel or with the more powerful antipilatelet agents. More randomised trials are needed to figure out the best protocol for antiplatelet administration following PCI. Treating a case of stent thrombosis is not easy, moreover stent thrombosis apart from producing an extensive myocardial infarction can kill a patient. Hence no stone should be left unturned to pick up the best treatment strategy in patients with acute coronary syndrome. The only choice available currently is replacing clopidogrel by ticagrelor or prasugrel in all patients of ACS undergoing stenting. This is obviously quite costly and may be beyond the reach of a sizeable number of patients.

It may be reasonable to check for CYP2C19 gene alleles or variants, particularly for the 2* variety, and if this variant be found to proceed to administer another anti platelet such as ticagrelor or preasugrel instead of clopidogrel. Or double the clopidogrel maintenance dose to 150 mg a day.