Across intensive care units in the country it is not uncommon to see injection furosemide being administered as an infusion in treating patients of acute decompensated heart failure. Acute decompensated heart failure carries considerable morbidity and mortality. Rates of death or rehospitalisation are uncomfortably high in the following 2 months. Millions of patients get admitted for acute heart failure but there is remarkably scanty evidence based upon randomised trials regarding treatment. For more than 6 decades the mainstay of treatment has been a loop diuretic such as furosemide. No new drug has so far emerged that can effectively replace loop diuretics for treatment of pulmonary oedema or acute heart failure. Adverse effects such neurohormonal activation, systemic vasoconstriction, electrolyte derangement or kidney failure are well known, as also the chance of death. But clinicians even today have access to little else but a loop diuretic. Other possible new medicines such as adenosine antagonist, endothelin antagonists, vasopressin antagonist or nesiritide have not lived up to their promise. It therefore becomes imperative that we turn to a modest albeit randomised trial comparing continued infusion with bonus injections of furosemide and high dose with low dose in the DOSE trial published in 2011. No important study has followed the DOSE trial. Maybe the industry does not feel the need to research a worthy new drug that can replace loop diuretics due to lack of fiscal returns.

The DOSE trial randomised a little more than 300 patients of acute decompensated heart failure to report that there was no difference in clinical outcomes whether one used continuous infusion of furosemide or gave 2 bolus injections of the same. Patients did not find any difference in their symptoms improvement nor was there any difference in renal function checked after 72 hours. The creating levels recorded after 72 hours was the same in both groups. However almost 43% patients died, needed rehospitalisation, or suffered an emergency visit in the following 60 days, suggesting clearly the seriousness of the problem. During the acute phase furosemide reduced congestion, lowered filling pressures of heart chambers, while improving symptoms.

The researchers concluded that no discernible difference was observed with continued infusion compared to bolus injections, nor was there any significant difference with the high dose compared with low dose. High dose of furosemide was 2.5 times of the oral dose being used earlier by the patient wile low dose was the same oral dose taken previously by the patient. High dose of furosemide was associated with non significant greater improvement in symptoms accompanied by temporary kidney dysfunction. It was reassuring to see that creative levels that increased transiently improved soon after. The high dose of furosemide also produced more decongestion. Observational studies highlighting greater efficacy with continuous furosemide infusion have been underpowered to detect clinical outcomes. The DOSE trial was a multi centre randomised study but was also underpowered to conclude on mortality difference. The high dose cohort had significant greater weight loss, improved symptoms, and net fluid removed. But crucially hospital was similar with high dose versus low dose, or continuous versus bolus injections of furosemide ( around 5 days).

In the DOSE trial more than 55% of patients had ischemic heart failure, and more than 50% had diabetes. The left ventricle ejection fraction was around 35%, while more than 90% f patients had a jugular venous pressure greater than 8 cms of water. A much smaller randomised trial comparing continuous with bolus furosemide showed greater reduction in BNP ( B type natriuretic peptide) levels but at the expense of worsening kidney function. At discharge in this study change in creative level was greater with continuous infusion as also fall in estimated glomerular filtration rate. Less than 90 patients of acute decompensated heart failure were randomised in this trial. Death or rehospitalisation were greater at 6 months n the continuous infusion group (58% versus 23%, p= 0.001). This study differed from the DOSE trial in that the patients had greater kidney impairment at base line, required diuretic therapy for longer duration, and the continuous infusion group more dopamine infusion or hypertonic saline , for hypotension or hyponatremia. 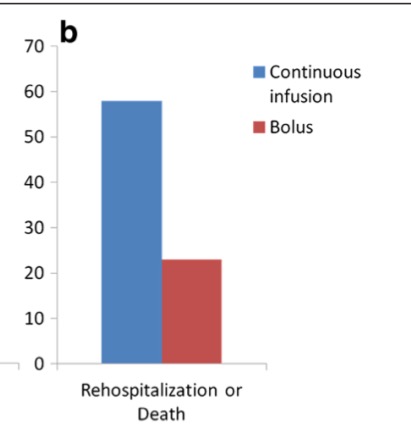 Observational trials have suggested that high dose furosemide results in greater mortality by activation the renin-angiotensin-aldosterone response. The DOSE trial did not reveal increased mortality with high dose furosemide up to 60 days. However continued infusion in the DOSE trial was not preceded by bolus injection, high dose infusion was maintained at 10 ml per hour and patients had serum creative level of 1.5 mg % suggesting mild kidney dysfunction. Moreover the DOSE trial too was not powered to pick differences in clinical outcomes. But it may be reasonable to use high dose bolus injections of furosemide in most patients of acute heart failure, except for those patients with right heart failure, diuretic resistance, or the cardiorennal syndrome. Food intake interferes with absorption of oral furosemide, therefore furosemide tablets are best taken on an empty stomach. Gut oedema in heart failure may slow absorption of oral furosemide.

Continuous infusion of furosemide results in greater urine output and more reduction in BNP level. There may be greater rates of acute kidney injury. There may be greater mortally or rehospitalisation with continuous furosemide infusion in immediate follow up. But as we can note there is very little data on such a common condition we are compelled to treat almost every day. It is obvious that larger multicentric trials assessing dose and mode of furosemide administration are conducted until an adequate replacement drug comes up.