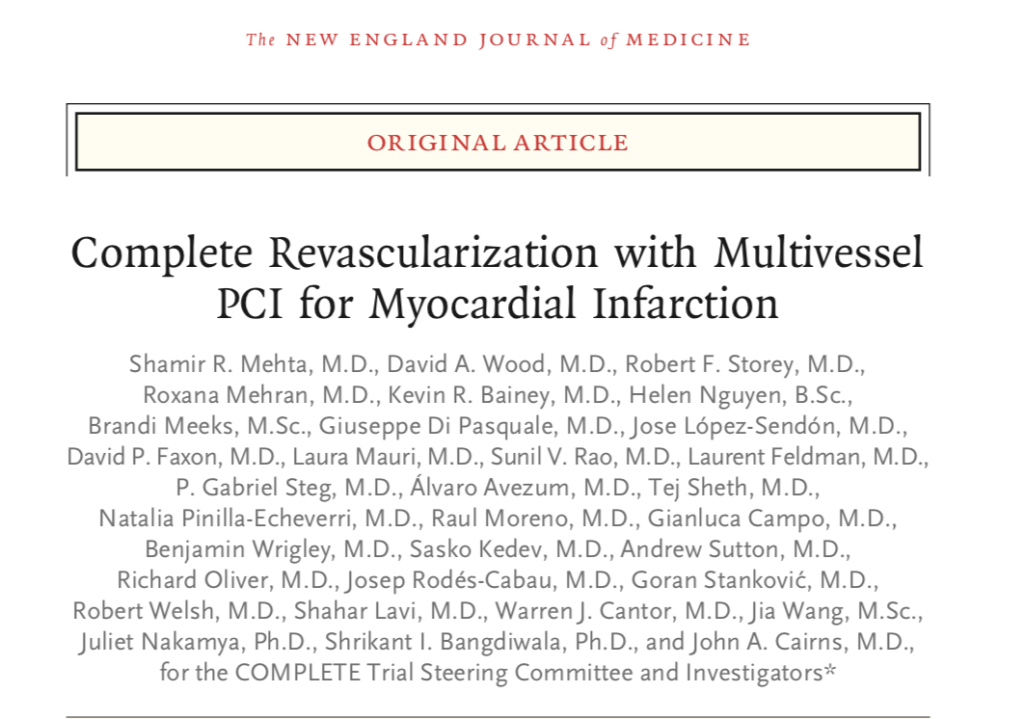 Percutaneous coronary intervention (PCI) consisting of PTCA with stenting remains the cornerstone for effective treatment in patients with acute myocardial infarction. There is rapid restoration of blood flow in the completely occluded culprit coronary artery, that is not only life saving but also improves left ventricle function, and which goes a long way in improving quality of life. More than 17.7 million people die annually because of cardiovascular disease. Heart disease and stroke kill more people than any other disease. In India alone more than 7 lakh people die of a heart attack each year, and the list is growing.

It is often found that 50% of patients with an acute ST segment elevation myocardial infarction (STEMI) that coronary arteries apart from the culprit are also significantly blocked. They have what is termed multi vessel disease. There are additional narrowed arteries apart from the coronary artery causing the heart attack.It was unclear whether tackling all concerned coronary arteries was the way to go or whether treating the culprit vessel and managing the remaining blocked vessel by pills ( and intervening only if symptoms developed) was a better option. Observational trials suggested treating all blocked vessels was the better alternative, but no large randomised trial has shown significant reduction in mortality.

A Danish trial randomised more than 600 patients to culprit vessel only PCI or directional flow reserve (FFR) dependent intervention of other coronary arteries to conclude that there was significant reduction in reintervention of non culprit vessels on more than 2 years of follow up, but no reduction in death ( lancet 2015;386:665-71). Another slightly larger randomised trial also came up with a similar recommendation, that intervention of all involved vessels in acute heart attack patients cut revascularisation but not the hard end points of death or myocardial infarction (N Engl J Med 2017;376:1234-44). More than 800 patients of STEMI with multi vessel disease were involved in this trial, both groups had FFR evaluation but the group with culprit alone PCI was unaware of the results ( both patients and the cardiologists).

A smaller British trial had shown that clinical outcomes were better with complete revasularisation than with culprit only intervention during pCI in STEMI patients. The CvLPRIT trial enrolled 296 patients in 7 UK centres and followed them for one year only. There was no significant reduction in death or myocardial infarction, but total MACE consisting of death, recurrent myocardial infarction, heart failure or repeat revascularisation was significantly less ( J Am Coll Cardiol 2015;65:963-72). The authors suggested that larger trials were warranted to confirm their findings. 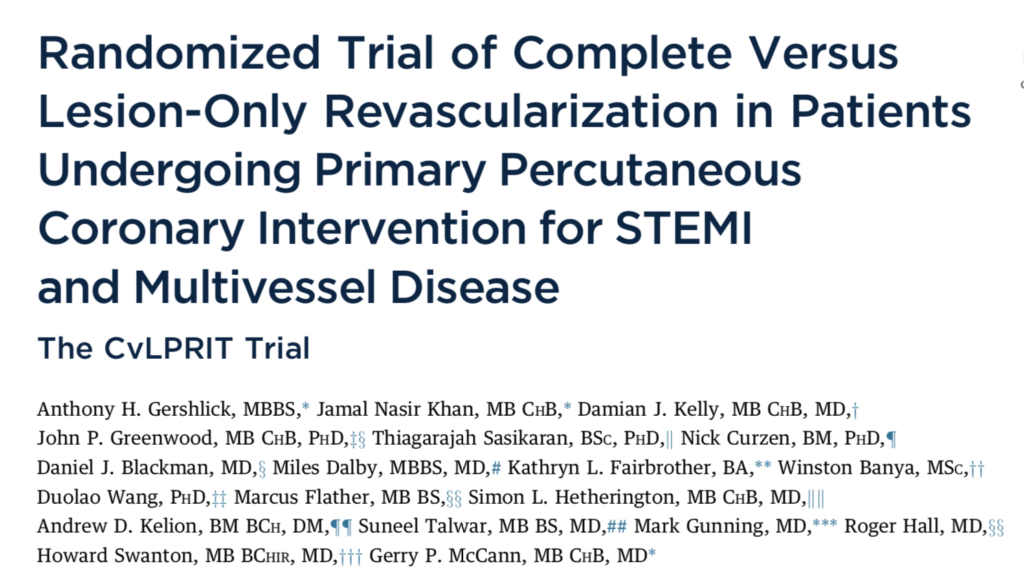 I saw a female patient just yesterday who had undergone successful primary PCI for a nasty acute inferior wall ST segment elevation accompanied by shock and heart failure a few months ago. During the index procedure she had multi vessel disease with greater than 70% blocks of the left anterior descending and left circumflex coronary arteries. The patient was advised intervention for the non culprit vessels at discharge but she was lost on follow up. She decided to consult me again because of symptoms of giddiness that did not seem to be related to her heart or the vasculature system. But armed with data from the COMPLETE trial I suggested to her to get the remaining coronary vessels tackled. The COMPLETE trial strongly suggests that despite no significant cut in mortality, there is substantial lowering of myocardial infarction and future re intervention if all involved coronary vessels are tackled during or soon after the index procedure. Importantly there were no major differences noted regarding acute kidney injury, stroke, bleeds or stent thrombosis.

Every patient of STEMI with multi vessel disease may not benefit by complete revasularisation, because some may have complex lesions ( long calcified block, chronic total occlusion or bifurcation stenoses) that may be difficult to treat percutaneously. Suitable non culprit vessels however should surely be treated. There is no urgent need to rush in because the non culprit vessels can be tackled subsequently after a couple of weeks and even later. One does not have to treat every vessel in the middle of the night, the entire cardiac team of the doctor, the nurse and technicians can get drained soon after opening up the culprit vessel at 2 am in the night. Crucially, COMPLETE studied more than 4000 patients of STEMI, while the SYNTAX score was around 16; hence extrapolating to more complex lesions may not be easy. But the COMPLETE trial will definitely have some impact on contemporary management of acute heart attack accompanied with multi vessel disease. Thousands of recurrent heart attacks could be prevented across the planet