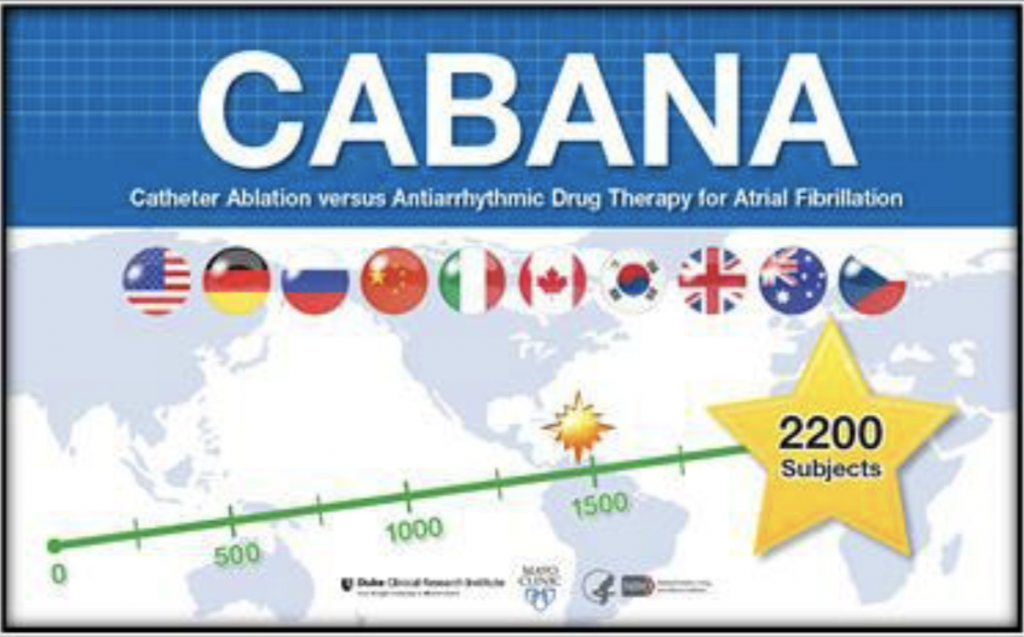 The AFFIRM trial ( N Engl J Med 2002; 347:1825-33) had randomised more than 4000 patients with atrial fibrillation (AF) to rate control and rhythm control groups. The researchers had concluded that there was no difference in mortality between the 2 groups, in fact adverse events were similar while deaths were actually a bit more in the rhythm control group. A total of 4060 patients were included in the trial with two thirds having hypertension while the remainder had coronary artery disease. There were 356 deaths in the rhythm control group versus 310 deaths in the patients assigned to rate control by 5 years follow up. More patients in the rhythm control group needed to be hospitalised. Anticoagualation was recommended in both groups. Rhythm control was achieved by amiodarone, disopyramide, flecainide, morcizine, procainamide, propafanone, quinidine, sotyalol and a combination of these drugs. Rate was controlled below 100/min by beta blockers, verapamil, diltiazem, digoxin or a combination of these drugs. The average age of patients studied was 70 years. 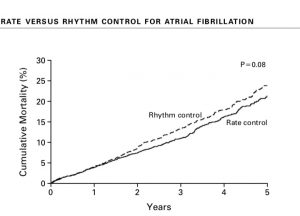 The next randomised trial comparing rate versus rhythm control was published more than a decade later ( N Engl J med 2016;374:1911-21). This studied AF developing post cardiac surgery. Rhythm control was achieved with amiodarone. New onset post operative atrial fibrillation occurred in almost 700 patients of the 2109 patients enrolled in this trial. Total number of hospital stay was the same in both groups. There was no significant difference in rates of death or over all serious side effects. At 60 days more than 94% patients in both groups had a stable without AF for the previous 30 days. The researchers of the trial concluded that a sizeable number of patients develop new onset AF after cardiac surgery, but there was no discernible difference in hospital stay, mortality or other complications. The strategy of rhythm control did not provide any clinical advantage over rate control in patients with post heart surgery AF.

A few days ago probably the largest randomised trial comparing catheter ablation with drug therapy in patients was presented at the annual Heart Rhythm Society Meeting in Boston. Drug therapy included both rate and rhythm control. The results were a downer for electrophysiologists and are bound to spark some controversy regarding ablation for AF in the months to come. The 2204 patient trial with the attractive name of CABANA ( Catheter Ablation vs ANtiarrhythmic Drug Therapy in Atrial Fibrillation ) was sponsored by the National Institute of Health and the industry (Medtronic, Abbot, Boston Scientific and Johnson & Johnson). The patients were followed for almost 5 years with no difference in the primary composite end point of death, cardiac arrest, stroke or major bleed (8% ablation versus 9.2% drug group ;p=0.3). There was ,moreover ,no significant difference in the individual end points. The patients were randomised in 1:1 fashion to either ablation or drug treatment. The mean age of patients was 67.5 years with 37% females.

A number of patients did cross over from the medical group to ablation; these were almost 27%, while 9.2 % of patients in the ablation group did not eventually get ablated. The secondary outcome of death or cardiovascular hospitalisation was 52% vs. 58% for ablation vs. drug treatment, p= 0.002. Ablation definitely lowered recurrence of AF by 47%. The interpretation of this important trial suggest that ablation is not superior to drug treatment for cardiovascular outcomes at 5 years among patients with new onset AF. Patients under 65 years or patients with heart failure enjoyed benefit with ablation. Patients above 65 years and especially those more than 75 years had no benefit with ablation. This is perplexing because usually patients more than 70 years carry a high co morbidity burden and tend to be sicker; hence they should have benefited more from ablation.

If you were to analyse the data as ‘on treatment’, then ablation gets better results. ‘On treatment’ implies treatment actually provided to patients after they had crossed over. But this is NOT a primary endpoint. The ‘intention to treat ‘(ITT) analysis is however the only analysis that supports the scientific core of randomisation. In other words the CABANA trial has failed to record the superiority of catheter ablation over drug therapy.

We shall have to wait for the trial to be published before passing the final verdic on ablation versus medical therapy. Maybe a sham controlled trial of ablation could provide better science, as did the SYMPLICITY ( renal artery denervation ) and the ORBITA ( PCI for stable angina ) trials did. The SYMPICITY HTN -3 trial was a blinded trial that failed to show reduction in systolic blood pressure with renal denervation as compared to a sham operation in controls (N Engl J med 2014; 370: 393-1401).The ORBITA trial showed that when a sham PCI is done in controls, PCI in patients with stable angina with severe coronary stenosis does not increase the exercise time (Lancet 2018, 391:31-40)

The CASTLE-AF trial ( N Engl J Med 2018;378:417) assessed ablation in patients of AF with heart failure. Patients with symptomatic paroxysmal or persistent AF unresponsive to antiarrhythmic drugs, had adverse side effects, or were unwilling to take medical treatment were assigned to ablation (179 patients) or to drug therapy (184 patients on rate control or rhythm) in addition to guideline based heart failure therapy.All patients were in NYHA class II,III or IV, had a left ventricle ejection fraction less than 35%, and an implanted defibrillator. The primary end point was a composite of death or hospitalisation for heart failure. The ablation patients had significantly less primary end point than the drug treated ones after a median follow up of 37.8 months. 29% vs. 45%; p=0.007). The researchers concluded that catheter ablation for AF patients with heart failure significantly reduced death or hospitalisation for heart failure than drug therapy. The trial was sponsored by Biotronik. Paroxysmal atrial fibrillation is defined as 2 episodes of AF that terminate spontaneously in 7 days, usually within 24 hours. Persistent AF carries on more than 7 day. Chronic AF lasts more than a year. The CASTLE-AF however was considerably smaller than CABANA and crucially studied only patients with systolic heart failure and AF.

Sub groups analysis is always too underpowered to make adequate conclusions of a trial; they are are at best hypothesis generating. For now ablation carries no clear advantage over medical therapy in patients with atrial fibrillation. Currently the most scientific trials in interventional cardiology will have to be sham controlled ones to remove bias to the fullest extent.