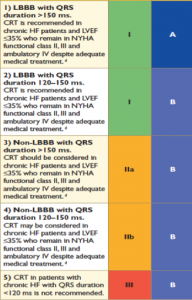 Recently a 45 year-old man was admitted for gross congestive heart failure (HF) due to non-ischemic cardiomyopathy (normal coronary arteries) and right bundle branch block (RBBB). He had been hospitalized before for breathlessness at rest. It was agreed that he was in NYHA class IV; he had a left ventricle ejection fraction of about 20%; the QRS was a little more than 120 msec. The junior consultants were keen to implant a biventricular pace- maker; till I patiently explained to them that cardiac resynchronization therapy (CRT) was yet not an indication because the patient was not ambulatory class IV, and he moreover had an RBBB. I had to draw their attention to the 2013 European Society of Cardiology guidelines on CRT therapy that provides a level of recommendation of II b in the event of RBBB, but the patient must be in NYHA class II – ‘ambulatory’ IV. Ambulatory class IV implies that the patient has not been admitted for heart failure electively or as an emergency in the previous one month. This patient had not only been admitted the previous week but currently was in hypotension mandating inotropes.

I also pointed out the MADIT-CRT (Multicenter Automatic Defibrillator implantation Trial with Cardiac Resynchronization Therapy) follow-up study published in the NEJM in 2014, which showed after a follow-up of 7 years that mortality was lowered by an absolute 11% in patients given cardiac resynchronization therapy plus a defibrillator (CRT-D) versus defibrillator alone (ICD); a significant reduction of mortality from 29% to 18%; p < 0.001(relative reduction of 41%). The decrease in deaths was seen regardless of sex, QRS duration or type of cardiomyopathy. But the most important thing was that these patients had to have left bundle branch block (LBBB). CRT-D therapy did not show any benefit in patients without LBBB; and actually went on to harm such patients.

Ninety seven percent patients were either on ACE inhibitors or angiotensin receptor blockers, 95% were on beta-blockers, and 70% were on diuretics. There were 16% patients in NYHA class I, only 12% were in class III or class IV , while 72% were in class II. Half of the patients had ischemic cardiomyopathy. Two thirds of patients had an LVEF less than 25%, all patients had to have an LVEF 30% or less and a QRS of more than 130 msec.

The MADIT-CRT study and the REVERSE (Resynchronization Reverses Remodeling in Systolic Left Ventricular Dysfunction) trial showed substantial improvement in left ventricle function and clinical status in patients with asymptomatic or mild HF, but the follow-up had been for only 2-3 years. The RAFT (Resynchronization-Defibrillation for Ambulatory Heart Failure Trial) study actually demonstrated reduction in deaths in patients treated with CRT-D.

The original MADIT-CRT trial had demonstrated that CRT therapy increased risk of ventricular tachycardia in non-LBBB patients probably due to the fact that there may be interference in spread of electrical signal in the left ventricle that is already more heterogeneous in such patients. The MADIT-CRT authors therefore do not advise biventricular pacing in patients with non-LBBB. They concluded that CRT-D is associated with significant long-term survival benefit in patients with mild heart failure who have an LVEF of 30% or less and and LBBB.

CRT is class I recommendation in patients with LBBB (>120 ms.), LVEF < 35%, who remain in in NYHA class II,III, and ambulatory IV despite adequate medical treatment.

CRT is NOT recommended in patients with chronic HF with QRS duration less than 120 msec.

We have to , based on the MADIT- CRT trial , wait for modification of these guidelines in patients  of chronic HF with non-LBBB disease. This should not be surprising because recommendations in guidelines not only are removed but are also downgraded as more evidence is gathered. Almost 6% class I recommendations based upon multiple trials are not retained in subsequent guidelines, 4% recommendations have been reversed or downgraded, over a period of 10 years.

The take home message is that the best results  with biventricular pacing are seen in patients with left bundle branch myopathy.