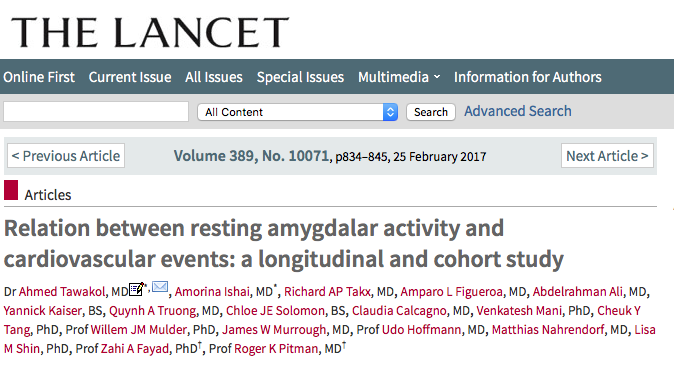 The association between mental stress and heart disease, which was for long speculated but never proven has final been nailed to a large extent by a study, published in the Lancet this year. The researchers from Harvard Medical School report that heightened activity in the amygdala, which processes emotions such as anger and fear, plays a major role in development of atherosclerosis.

The amygdalae (there are 2 of them on either side of the brain) prepare us for reacting to strong emotional stimuli. The amygdala is responsible to responses to both pleasure and fear. Amygdala means almond in Latin and the term was first used in 1819.

The Harvard Medical School  (Lancet 2017; 389: 834- 845) researchers suggest that increased activity of the amygdala triggers heart attack and stroke. Combined CT and PT scans were performed in 293 patients to document brain, bone marrow, spleen activity and inflammation of the arteries. They studies individuals aged 30 years or older without known cardiovascular disease or active cancer. The participants were followed up for 3.7 years on an average to see if they developed cardiovascular disease. In this time frame 22 patients suffered from heat attack, angina, stroke, heart failure and peripheral arterial disease. Patients with greater amygdala activity developed cardiovascular disease earlier than those with lower activity. 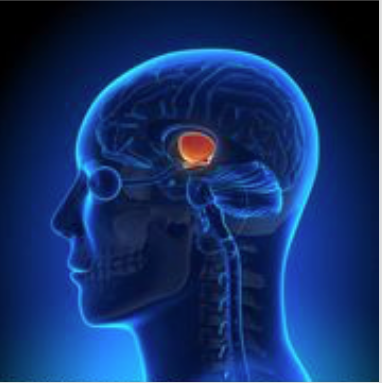 The authors found that heightened activity of the amygdala was associated with increased bone marrow activity and inflammation in the arteries, and concluded that this link may be the harbinger of cardiovascular disease. The amygdala signals to the bone marrow to produce extra white blood cells, which in turn inflame the arteries along with development of plaques in the arteries. Ultimately chronic mental stress triggers a heart attack or stroke.

Heavy work loads, job insecurity, or living with little money or poverty result in chronically increased stress, which in turn can lead to chronic psychological disorders like depression and anxiety. Chronic stress is as important a risk factor for heart disease and stroke as are hypertension, smoking, hypercholestrolemia and diabetes.

For years scientists have tried to figure out a plausible connection between chronic stress and heart disease. The Lancet study discusses that the amygdala, which is responsible for tasking the bone marrow to temporarily hike up the rate of white blood cell production to fight infection and repair damage. This is an evolutionary act of survival and preparing us for fight or flight. But in the modern world persistent stress leads to over production of white cells and blocks in the arteries.

In a small sub-study, 13 patients with history of post traumatic stress disorder (who had their stress levels assessed by a psychologist) underwent a PET scan and had levels of C-Reactive protein (indicator of inflammation in the body) checked. Those who perceived greatest amount of stress had the highest levels of amygdala activity accompanied by higher levels of C-reactive protein

The researchers concluded that theirs is the first ever study to ling regional brain activity to subsequent cardiovascular disease, that amygdalar activity independently and robustly predicted cardiovascular disease events. More studies will of course be needed to confirm this brain-heart mechanism link in heart disease. The study however will resonate with most clinicians all over the world and particularly in India, who have always feared the burden of chronic stress and cardiovascular disease.

Crucially the public needs to be informed that apart from smoking, hypertension and diabetes there has always been another lurking risk factor that was dismissed earlier as being unimportant. This underscores the importance of meditation and moderate exercise to drive away the blues if possible.