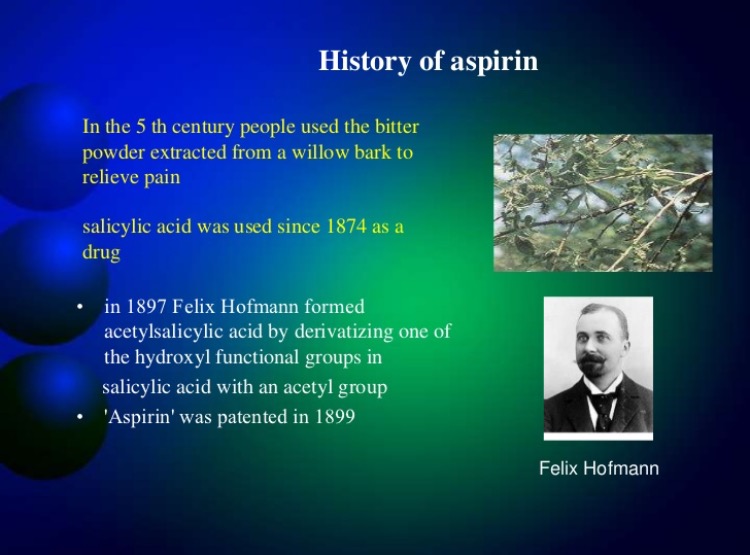 The last 5 years have have delivered a couple of very exciting new anti-platelet (AP) drugs that bring along with them considerable advantages of efficacy along with some safety issues. We had aspirin for decades and were doing quite well but the introduction of stent thrombosis mandated research on more powerful AP’s. It is however crucial we understand their mechanisms of action and adverse effects. Aspirin has been used for hundreds of years for a variety of ailments A Nobel Prize has been won on research on counter effects of aspirin on prostaglandins. Aspirin is mandatory for secondary prevention of cardiovascular disease at a remarkably low dose of 75-80 mg a day. Aspirin blocks the thromboxane receptors and thus prevents formation of blood clots.

Aspirin was developed in Germany in 1897; its active ingredient is acetyl salicylic acid. Hippocrates had described a brew from willow leaves to treat labor pains in 400 BC. Willow contains salicin from which acetyl salycylic acid is derived. Sir John Vane discovered that aspirin blocked enzymes needed for production of prostaglandins; he won the Nobel for this feat in 1982. Aspirin therefore prevents heart attacks and strokes. Aspirin has also been to reduce bowel cancers by a half a similar action of blocking prostaglandins.

The next big AP was clopidogrel that blocks the P2Y12 or adenosine diphosphate (ADP) receptor. It has been shown that clopidogrel combined with aspirin prevents heart attacks, stroke and cardiovascular death and crucially it prevents stent thrombosis post coronary stenting in patients with acute coronary syndrome. Clopidogrel has been around for more than a decade. The loading dose is 300-600 mg followed by a daily dose of 75 mg a day.

Prasugrel, another ADP antagonist with a much quicker onset of action than clopidogrel, was launched after the TRITON-TIMI trial. Prasugrel has the advantage over clopidogrel of not needing 2 stages in metabolic conversion to become active. The TRITON trial showed significant reduction in the composite of cardiovascular events with prasugrel when compared with clopidogrel. There was however increased bleeding. Prasugrel in the process of more robust platelet inhibition also led to greater bleeds. There was an increase in fatal bleeding too with prasugrel. It is recommended that prasugrel not be used in people over 75 years, weighing less than 60 Kg and in patients who have previous history of TIA or stoke. The loading dose is 60 mg followed by maintenance of 10 mg a day.

Yet another AP came along; this was ticagrelor which although not a thienopyridine blocked ADP receptors very effectively. The PLATO trial comparing ticagrelor plus aspirin with clopidogrel plus aspirin shoed that the ticagrelor arm had significant reduction in cardiovascular clinical outcomes (death, heart attack and stroke). It importantly was found to lower mortality also apart from the composite of clinical outcome. But ticagrelor too due to its potent anti-platelet effect will cause bleeds and therefore one should use it prudently.

So both prasugrel and ticagrelor are more potent than clopidogrel besides having a quicker onset of action. Prasugrel is never used before percutaneous coronary intervention (PCI) in unstable angina or non ST-segment elevation myocardial infarction; prasugrel is to be administered once the coronary anatomy is known. This protocol was adopted in the TRITON trial. Prasugrel can however be given before coronary angiography in ST-segment elevation myocardial infarction. The ACCOAST trial has confirmed that the strategy of giving prasugrel prior to coronary angiography provides no clinical benefit in acute coronary syndrome patients but instead more harm by increasing bleeding significantly.

The PEGASUS trial published last year demonstrated addition of 60 mg ticagrelor to low dose aspirin to patients with a prior heart attack significantly albeit modestly reduced dying from cardiovascular causes, having another heart attack or having a stroke. Ticagrelor is recommended over and above clopidogrel in patients with acute coronary syndrome under going PCI; prasugrel too is preferred to clopidogrel in such patients (American College of Cardiology guideline 2014). There were 21,000 patients from 31 countries who were given ticagrelor with aspirin vs. aspirin alone (in a randomized manner) in patients who had been on dual anti-platelet therapy for 12 months following a heart attack. Ticagrelor is used at 180 mg for loading dose and 90 mg twice a day there after. The dose of ticagrelor tested in PEGASUS were 60 mg and 90 mg twice daily; both doses were found to be equally effective.

The FDA first approved ticagrelor in July 2011 on data delivered by the PLATO trial, which showed that at least for the first 12 months following an episode of acute coronary syndrome, it was superior to clopidogrel. It was the first AP to demonstrate reductions in cardiovascular death in addition to significant reduction in stent thrombosis.

Primary prevention with 2 AP’s is a big no. A subset in the CHARISMA trial looking into aspirin with clopidogrel vs. aspirin alone in patients at high risk of cardiovascular disease, found that dual anti-platelet worsened clinical outcomes. Aspirin was not found to be effective for primary prevention in 11 randomized trials. A recent Japanese study too showed that aspirin was largely ineffective in preventing cardiovascular events in middle-aged people with risk factors for cardiovascular disease.