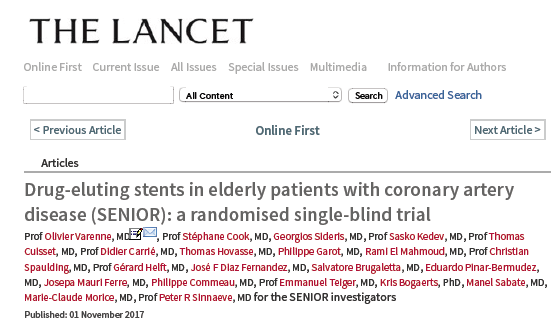 At the outset it cannot be emphasized enough that the SENIOR study was funded by the industry. This was presented at this years TCT Meeting and simultaneously published in the Lancet. The aim of the study was to compare clinical outcomes in patients over 75 years assigned to drug eluting stent (DES) and a bare metal stent (BMS) with a short duration of dual antiplatelet therapy (DAPT). In this randomized single blind trial 1200 patients with stable angina (half of them) and acute coronary syndrome were studied (15% had NSTEMI, 10% had STEMI, and 9% had unstable angina). Duration of DAPT was only one month in stable angina patients and 6 months in those with acute coronary syndrome. The primary outcome (death, myocardial infarction, stroke or ischemia driven target lesion revascularization) was significantly less by an absolute 4% in the DES group as compared to the BMS group (12% versus 16%). Bleeding complications were similar (5% vs.5%). Stent thrombosis too was similar in both groups (1% vs. 1%). The mean patient age was 81 years in each arm, 62% in each arm were males, 25% had diabetes and 52% had hypercholesterolemia. The researchers concluded that DES with short duration of DAPT was better than BMS with short duration of therapy in PCI done in elderly patients. The DES advantage was driven largely by ischemia driven target lesion revascularization (2% vs. 6%; p=0.0002).

Many centers still continue with BMS in elderly patients because of the need for shorter duration of DAPT, and the hope of fewer bleeds. Percutaneous coronary intervention (PCI) revolutionized treatment of obstructive coronary artery disease by introducing a far less invasive procedure than CABG open-heart surgery. The first stents to be used were BMS that prevented acute closure by scaffolding the arterial wall and cutting down restenosis rates to 20%. First generation DES further reduced restenosis rates to 5% or less, but were associated with delayed arterial healing and consequent late stent thrombosis. Second generation DES with thinner struts and absorbable polymer have further reduced restenosis to approximately 3% and stent thrombosis to less than 1%. 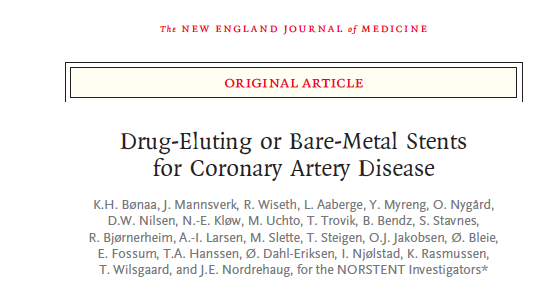 Last year saw the publication of the Norwegian Coronary Stent Trial (NORSTENT), which compared newer generation BMS with second generation DES. The most important aspect for me is that the NORSTENT trial was NOT industry sponsored. More than 9000 patients were randomly assigned to receive a contemporary DES or BMS. There was no difference in the primary composite outcome of death or myocardial infarction. There were also no differences in individual endpoints such as death, myocardial infarction, stroke or unstable angina. The results are not surprising because atherosclerosis is not a focal disease but a systemic problem. This is the reason lifestyle change, risk factor control and drug therapy are well known to reduce clinical outcomes. Newer stents have on the other hand cut down rates of restenosis and stent thrombosis. In the NORSTENT trial too rates of target lesion revascularization were reduced from 10.3% in the BMS cohort to 5.3% with DES (p<0.001) while stent thrombosis was lowered from 1.2% (BMS) to 0.8% (DES); p=0.0498. The p value somehow gets below the magic 0.05, but the absolute difference is only 0.4%. More than 50% patients were enrolled for myocardial infarction;almost 30% had stable angina.

Earlier investigators of the BASKET PROVE trial had reported that in stents of 3mm or more there was no difference in death or myocardial infarction in more than 2000 patients randomly assigned to DES or BMS. Target lesion revascularisation was significantly less with DES than with BMS. Both sirolimus and everolimus eluting stents were used in the DES cohort( NEJM 2010; 363:2310-9.

DES have become the favored stents due to their perceived better clinical outcomes, accompanied by recent recommendations of shortened DAPT. Despite the attractiveness of DES, BMS can be used in patients incapable of taking DAPT, in non-compliant patients, in large diameter coronary arteries, and when there is need of non-cardiac surgery. The NORTSENT trial reinforces the place for clinical use of BMS in selected patients undergoing PCI. A coffin is certainly not the place for BMS nor has the final nail been driven into this coffin by any means, despite the high decibel clamor of stent manufacturers. Almost two thirds of anti cancer drugs are approved on surrogate endpoints and not on extension of life. Of these only 10-12% of drugs have actually been found to increase a patient’s life span. Yet the drugs have been cleared by the FDA and European regulating authorities. One therefore has to be constantly vigilant of parma industrial complex and make the effort of reading beyond the lay press or scanning through abstracts of leading medical journals.