The WOEST trial ( Lancet 2013; 381:1107-15) was the first randomised study to show that a combination of a vitamin K antagonist (VKA) and a P2Y12 inhibitor when employed inn a patient of atrial fibrillation undergoing PCI resulted in significantly less bleeds than a triple combination of VKA, aspirin and a P2Y12 inhibitor. The study however randomised less than 600 patients. At the end of a year major bleeds were reduced from 45% in the triple therapy group to 20% in the double therapy group; p<0.0001). The conclusion was that use of clopidogrel minus aspirin was associated with a significant reduction in bleeding complications, without an increase in thrombotic events. The study was not powered to assess changes in ischemic events or mortality.

Atrial fibrillation (AF)s the commonest arrhythmia in adults and therefore more than 10% of patients suffering from acute coronary syndrome are found to be in AF. The aim is to prevent ischemic events such as myocardial infarction or stent thrombosis, and also simultaneously prevent thromboembolism because of AF. Ischemic events can be avoided by dual anti platelet therapy (DAPT) while embolism (stroke) is prevented by an oral antocaogulant (OAC). The problem is that combining DAPT with an OAC increases the risk of major bleeding considerably. Choosing antithrombotic treatment for an AF patient suffering also from acute coronary syndrome becomes quite a challenge.

Apart from WOEST, 2 more randomised trials comparing a new oral anticoagulant (NOAC) plus a P2Y12 inhibitor with triple therapy consisting of VKA, aspirin and P2Y12 inhibitor showed a lower incidence of bleeding with double regimen therapy without aspirin. These 2 rials were not powered to assess whether lower bleeds were due to avoidance of aspirin or due to use of a NOAC.

The PIONEER trial randomised 2124 patients with non valvular AF who had undergone PCI with stenting to receive, in a 1:1:1 ratio, low dose rivaroxaban (15 mg once a day) with a P2Y12 inhibitor (group 1), very low dose rivaroxaban (2.5 mg twice daily) plus DAPT for 1,6 or 12 months (group 2), or standard treatment with a dose adjusted VKA (once a day) plus DAPT for 1, 6, or 12 months (group 3). The investigators noted that by one year both rivaroxaban groups had significantly less bleeds than the triple therapy group including a VKA. Efficacy rates were similar. Rates of death, myocardial infarction , or stroke were the same ( N Engl J Med 2016375:2423-34). 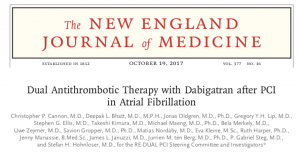 All 3 trials mentioned above were not however powered to pick up increased ischemic events nor to determine whether the lower risk of bleeding was due to avoidance of aspirin or the use of a NOAC. The latest trial on the subject is novel in that it has used a 2 by 2 factorial randomised comparison of apixaban with a VKA and of aspirin with placebo, in as many as 4614 patients. Apixaban in the AUGUSTUS trial significantly lowered major bleeding and hospitalisation as compared to a VKA ( N Engl J Med , March 17,2019). The suggestion is that given the robustness of the data a NOAC should be routinely prescribed in patients with AF who have a n acute coronary syndrome. An antithrombotic regimen with apixaban without aspirin was safer than regimens that included a VKA, aspirin, or both. Ischemic events also did not differ significantly. Major bleeds were defined as resulting in death, bleed within the eye, drop of haemoglobin of 2 gm%, or need for 2 units of blood transfusion.

There is clearly no one size that fits all situation when dealing with a patient of AF requiring PCI. Patients have to be individualised, a patient with a high bleeding risk with a low embolic risk could best be treated with a combination of NOAC with a P2Y12 inhibitor. In the AUGUSTUS trial more than 90% of patients were provided clopidogrel, which is the least potent drug in the P2Y12 group. The CHA2DS2-VASc score was 4, while the HAS-BLED score was 3.The median age of patients was 70 years, and apixaban was administered at a dose of 5 mg twice as day. In selected patients apixaban dose was reduced to 2.5 mg twice a day ( if they met 2 or more of the following ; age more than 80 years, weight less than 60 kg, creatinine level more than 1.5 mg%)

The AUGUSTUS investigators concluded that in patients with AF and acute coronary syndrome or PCI taking a P2Y12 inhibitor, there was less bleeding and hospitalisations with apixaban without aspirin. There is crucially no trial comparing safety and efficacy of the  various NOAC’s in AF patients undergoing PCI.