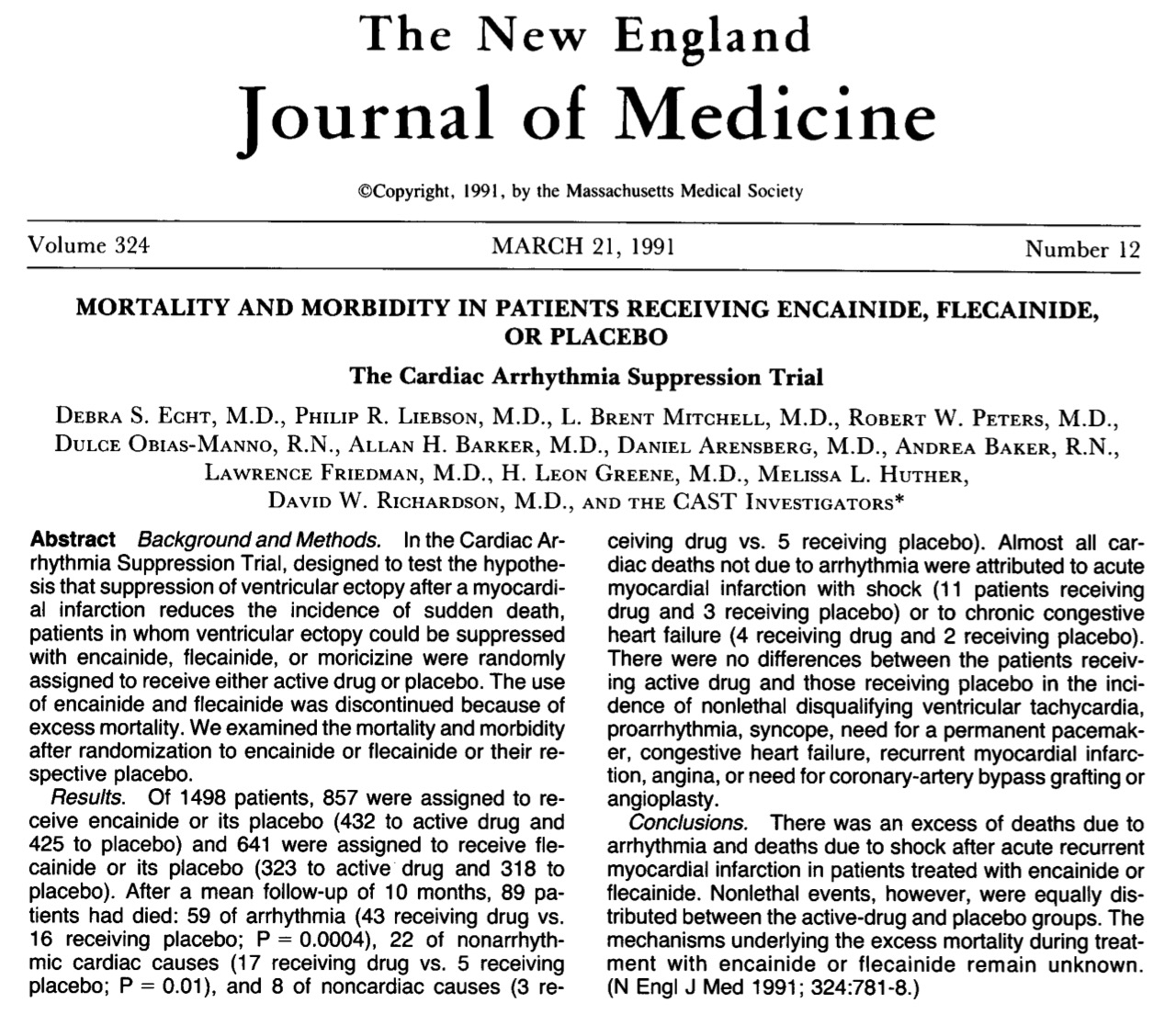 Survivors of acute myocardial infarction (AMI) with impaired left ventricle systolic dysfunction face the prospect of sudden cardiac death (SCD) largely due to the presence of premature ventricular complexes (PVC’s) and ventricular tachyarrhythmia. The incidence of mortality increases 4 folds if there are more than 10 PVC’s in an hour. However anti-arrhythmic medicines proved to be hazardous in these patients. More than 2 decades ago, a major randomized trial confirmed that the anti arrhythmic drugs flecainide and encainide actually increased mortality as compared to placebo in patients who had had an AMI in the past. The CAST trial ensured that anti arrhythmic were no longer used to treat PVC’s and non-sustained ventricular tachycardia.

The first ICD was implanted in 1979 and the first randomized trial published in 1996. One hundred and ninety six patients of prior MI, in NYHA functional class I, II, or III heart failure, having an LVEF <35%, documented unsustained ventricular tachycardia, and inducible VT on electrophysiologic study were randomly assigned to receive an ICD or medical therapy. During an average follow up of 26 months there were 15 deaths in the ICD group and 39 deaths in the medical group. This was a relative reduction in mortality of 54%. Moreover there was no indication that amiodarone was of any help in lowering mortality in this study. There was an absolute reduction of 19% in deaths.

The MUSTT trial randomized patients for almost 5 years and reported an absolute reduction of 31% in mortality. The MADIT II (2 years analysis) and SCD-HeFT (5 years analysis) trials showed absolute reduction in deaths of 6% and 7% respectively. The SCD trial compared ICD therapy or amidarone with placebo in 2,521 patients with symptomatic heart failure due to ischemic or non-ischemic left ventricular dysfunction.

The consensus of American and European guidelines evolved to advising ICD therapy for prophylactic therapy in post MI patients with an LVEF of 30% or less; and in patients with LVEF of 35% or less when accompanied with heart failure of NYHA II to III, non sustained VT on ambulatory monitoring or inducible VT. ICDs are used in select patients with LVEF of <35% at least 40 days after MI NYHA class 2 -3 symptoms; or with an LVEF of <30% accompanied by NYHA class I symptoms.

A recent Danish trial concluded that prophylactic ICD impanation in patients of non-ischemic heart failure was not associated with significant lower long-term death rate. The trial randomized 556 symptomatic heart failure patients (LVEF <35%) not caused by coronary artery disease to ICD implantation and 560 similar patients to usual medical care. There was no significant reduction in deaths in the ICD group.

But the most recent review plus meta-analysis published online 27th June 2017 in Annals of Internal Medicine vouches for positive role of ICD for primary prevention both in ischemic and non-ischemic LV dysfunction. The authors included 11 randomized controlled trials with 8716 patients. Four trials had non-ischemic patients (1781 patients), 6 trials had ischemic cardiomyopathy patients (4414) and 1 trial had both kinds of patients (2521). The researchers found that after a mean follow up of 3.2 years, ICD’s lowered all cause deaths from 28% to 21% (7% absolute reduction). Reduction was statistically significant in non-ischemic patients and a lower trend in deaths was seen in ischemic patients. 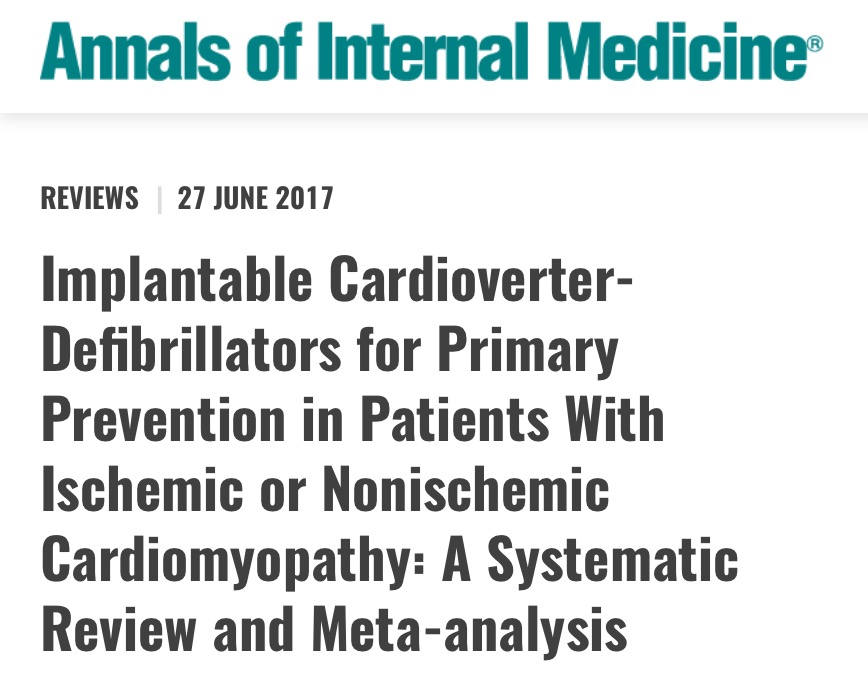 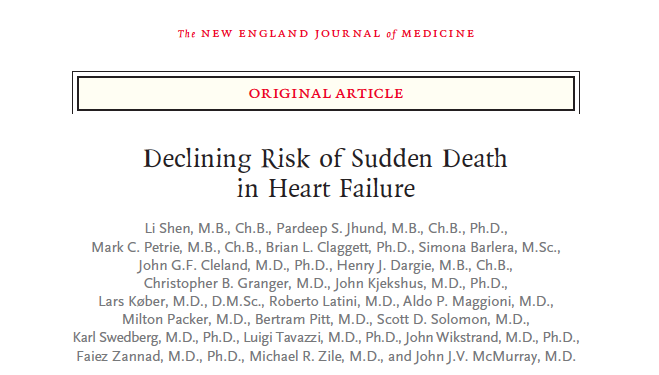 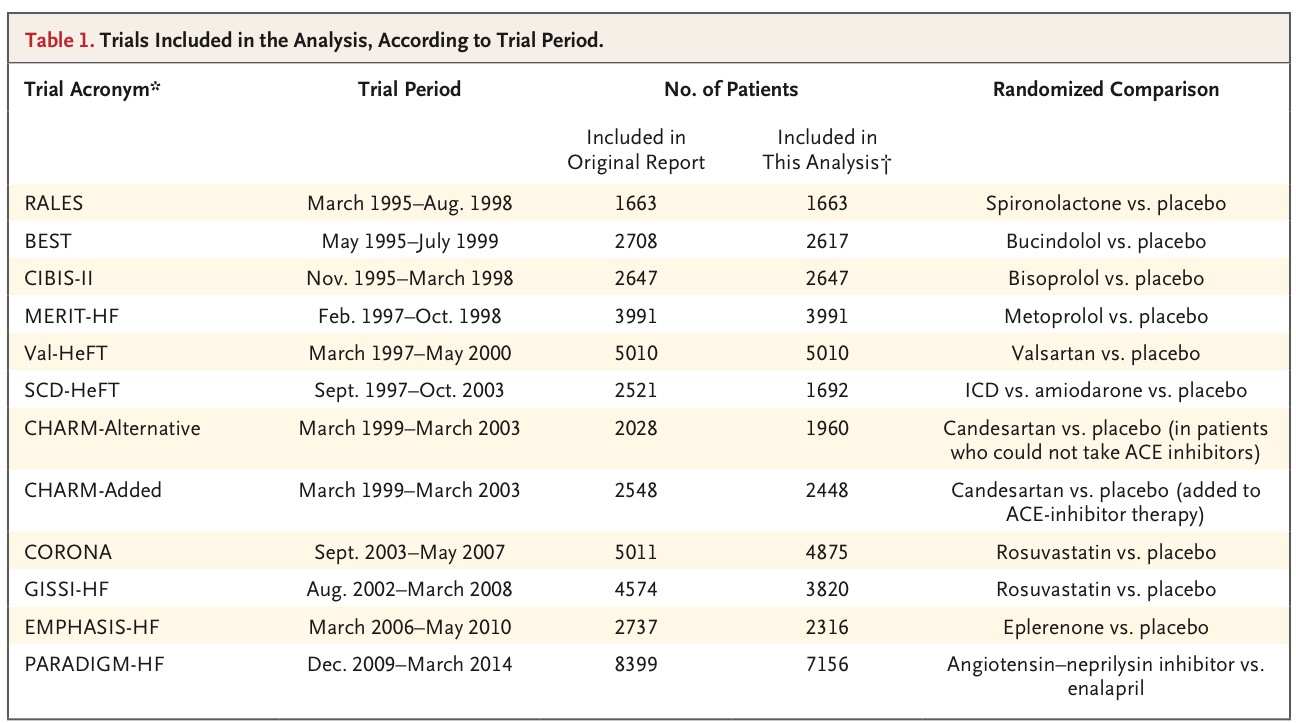 Contemporary cumulative incidence of sudden death is approximately 2% in patients treated with an ACE inhibitor or angiotensin receptor blocker, a beta-blocker, and a mineralocorticoid receptor blocker. The 6-month rate was 1.7% among patients receiving combination therapy with sacubitril and valsartan. But mortality climbed up to 14% and 18% in the sacubitril/Valsartan  group versus enalpril in the Paradigm heart failure trial. This raises the possibility that it may be difficult to obtain incremental advantage with an ICD when optimal heart failure medical therapy is used. The need now is to identify those patients who would benefit with an ICD. The authors suggest that 3 months may be too short a time to observe recovery of left ventricle ejection fraction. One may have to wait for as long as 12 months before implanting an ICD.

There are problems with ICDs such as infection, inappropriate shocks and also device malfunction compromising quality of life. But it would be prudent to implant an ICD in a patient of 2-3 months old myocardial infarction who has an LVEF <30% , accompanied by frequent ambient ventricular ectopics or non-sustained ventricular tachycardia, till an adequately powered randomized trial is conducted comparing prophylactic ICD with contemporary heart failure medication.