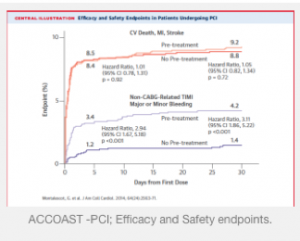 Recently a middle-aged man presenting with non ST-segment elevation myocardial infarction (NSTEMI) with significant distal left main disease involving ostia of the left anterior descending (LAD) and left circumflex (LCX) arteries consented for percutaneous coronary intervention (PCI). He underwent successful distal left main stenting with TAP stenting for the LCX lesion, but almost immediately developed a large thrombus in the LAD artery, that was managed with an intra-coronary high dose tirofiban injection. The patient had been pre-loaded both with aspirin and 60 mg of prasugrel before coronary angiography. This case suggested the futility of pre-loading with prasugrel but raised other questions such as the role of upstream glycoprotein IIb/IIIa inhibitors (GPI), particularly in patients with distal left main disease.

The current issue of the Journal of American College of Cardiology carries details of the ACCOAST-PCI study that tested the role of pre intervention prasugrel versus no pre-intervention prasugrel in patients with NSTEMI and found that there was no difference in ischemic events. There was on the other hand greater bleeding with administration of pre-intervention prasugrel. In the double blind randomized ACCOAST (A Comparison of prasugrel at the time of Percutaneous Coronary Intervention Or as pre-treatment At the time of diagnosis in patients with non ST-segment elevation myocardial infarction) trial of 4,033 patients with NSTEMI, 1394 patients received pre-treatment with prasugrel (30 mg), and 1,376 got placebo. At the time of PCI the placebo patients were given 60 mg of prasugrel while the pre-treated group got another 30 mg of prasugrel. Primary efficacy was a composite of cardiovascular death, myocardial infarction, stroke, urgent revascularization, or GPI bail out up to 7 days from randomization. Pre-treatment with prasugrel did not reduce the primary endpoints (13.1% versus 13.1%, p=0.193), nor was there any difference in mortality. There was moreover no difference in the incidence of stent thrombosis or presence of thrombus before PCI. Patients with thrombus before PCI had 3-fold increase in primary endpoints than patients without thrombus. There was 6-fold increase in life threatening bleeding in patients pre-treated with prasugrel, regardless of radial access or femoral closure devices.

Most if not all patients with NSTEMI have atherosclerotic plaque erosion/disruption with super-imposed thrombus and undergo an early invasive treatment with coronary stenting. They also receive mandatory adjunctive therapy with antiplatelets to prevent stent thrombosis and adverse cardiovascular events later on. Dual antiplatelet therapy (DAPT) with aspirin and a P2Y12 inhibitor is critical both during the index procedure and as maintenance. The best timing for administration of DAPT in patients with NSTEMI has astonishingly still not been confirmed. The American and European guidelines had previously recommend DAPT on presentation of the patient; and as soon as possible. The ACCOAST trial has challenged this recommendation because no clinical benefit on clinical outcomes was seen in pre-treatment with prasugrel before PCI in NSTEMI patients. Pre-treatment with prasugrel had before the ACCOAST trial promised better clinical results because of higher antiplatelet activity and therefore fewer ischemic clinical outcomes. But this large randomized trial has revealed that pre-treatment with prasugrel is of not much use, and actually results in greater bleeds.

The ATLANTIC trial (Prehospital Ticagrelor in ST-Segment Elevation Myocardial Infarction) published in the NEJM this year randomized 1862 STEMI patients to prehospital (in ambulance) versus in the cath lab treatment with ticagrelor. The endpoints (proportion of patients without 70% or greater resolution of ST-segment resolution before PCI and the proportion of patients without TIMI 3 flow on angiography before PCI) were the same in both groups. The study concluded that pre-hospital administration of ticagrelor in patients with STEMI albeit safe (because there was no excess bleeding) did not improve pre-PCI coronary reperfusion. The rates of stent thrombosis were however lower with pre-hospital ticagrelor. The ATLANTIC study assessed STEMI patients undergoing primary PCI.

So what should the treating clinician do in patients with NSTEMI? The strategy will depend on the P2Y12 inhibitor employed. Clopidogrel because of its delayed and weak antiplatelet activity should be given prior to angiography. The CREDO trial (Clopidogrel for the Reduction of events during Observation) suggested that administration of clopidogrel hours before PCI resulted in lowering of clinical events. The approach with prasugrel should be to give it after coronary angiography has been done and the extent of disease has been confirmed; because almost one fourth of patients may require coronary bypass surgery (CABG) and hence would be better off minus any prasugrel in their system.

The 2014 American Heart Association/American College of Cardiology guidelines on NSTEMI do not recommend pre-treatment with prasugrel (as suggested by ACCOAST), but advise ticagrelor or clopidogrel (if the former is unavailable). The European guidelines similarly recommend prasugrel post coronary angiography in NSTEMI patients, and not before. Ticagrelor is the antiplatelet of choice with the Europeans and is recommended as pre-treatment. In patients with NSTEMI it would be best to defer loading with prsaugrel until the coronary anatomy has been delineated and a subsequent revascularization approach adopted; this strategy provides flexibility in withholding prasugrel from patients needing CABG and also significantly lowering major bleeds.