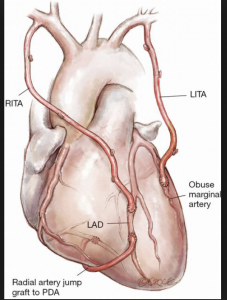 The advantages of an arterial graft during coronary artery bypass graft operation is well recognised; largely because of the fact that an internal mammary graft will remain patent as long as 20 or more years. It has been known for decades that more than 90% single internal mammary artery graft (SIMA) are patent into the third decade post CABG, while more than two thirds of venous grafts get blocked by 10 years. A systematic review and meta analysis had previously documented significantly reduced mortality with bilateral internal mammary grafting (BIMA) as opposed to SIMA accompanied by venous grafts, albeit this included observational studies that had a collective cohort of more than 15,000 BIMA patients. The mean follow-up was around 4 years only. It was explained that the reduced mortality was a consequence of greater patency associated with BIMA ( N Engl J Med 2016;375: 2540-46). 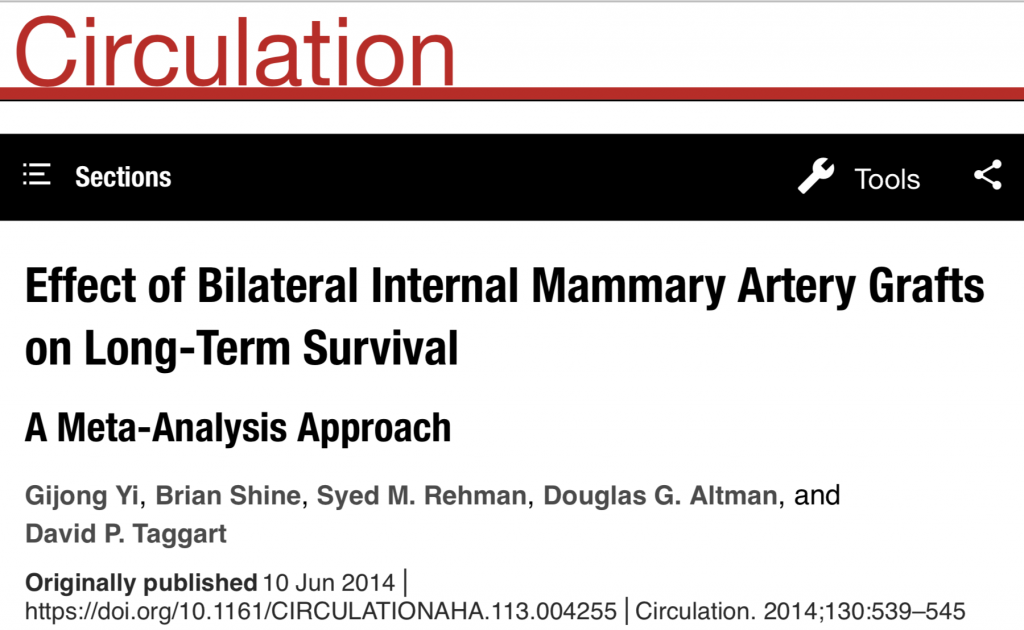 Despite the promise of prolonged survival associated with BIMA less than 5% North American cardiac surgeons use bilateral internal mammary graft technique, the statistic from Europe being marginally better, around 10% surgeons employ BIMA ( Circulation 2014;130:539-45).A meta analysis with a 10 year follow up also demonstrated reduced mortality when BIMA is used as opposed to SIMA, but surgeons continued to be hesitant. The reasons for their reluctance were largely that BIMA was far more challenging and the incidence of sternal infection was markedly increased. Also there was little or no randomised data.

Another meta-analysis of 29 observational studies including almost 90,000 patients noted that overall the BIMA group had significantly better long term survival than the SIMA cohort (HR 0.78; p< 0.00001). The BIMA group also had significantly lower in hospital mortality, cerebrovascular accidents, and requirement for revascularization. However the incidence of deep sternal wound infection was significantly more in the BIMA cohort ( 1.8% vs. 1.4%, p = 0.0008), (Heart 2017;103:1419-26).

This weeks edition of the New England Journal of Medicine reports a large randomised trial comparing BIMA with SIMA, the Arterial Revasularization Trial (ART). The ART trial at 5 years follow up had earlier failed to show any reduction in deaths with BIMA, nor was the composite outcome of death, myocardial infarction, or stroke lowered in any way. The 10 years results are no better ( N Engl J Med 2019;380: 437-46). 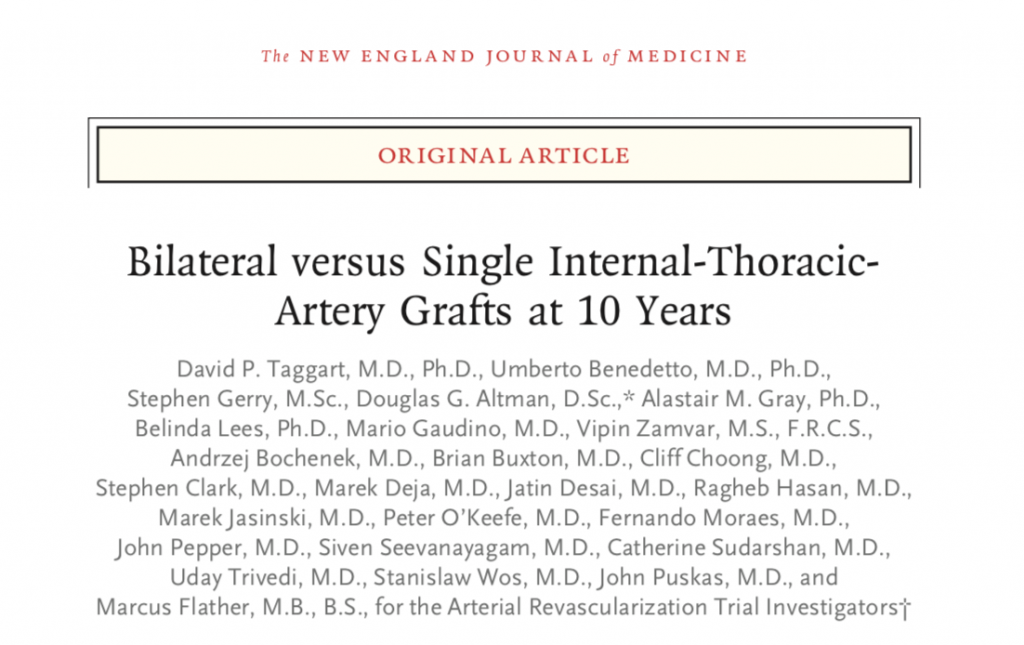 At 10 years, ART  reported no benefit of BIMA over SIMA as regards to all cause mortality (20% vs. 21%, p=0.62). Also the composite outcome of death, myocardial infarction, or stroke was not reduced by BIMA. Results were similar in all sub groups. But a trend towards benefit with BIMA for the composite of each, MI or stroke evolved after 7 years , suggesting that possibly younger patients may stand to benefit with BIMA as compared to SIMA during CABG. The relative difference however noted by the researchers is only 10%.

So what may explain the failure of BIMA to lower deaths following CABG despite obviously better patency rates. Most surgeons would opine that experience is one of the most important factors. In ART the rate of crossover from BIMA to SIMA was quite high, indicating that less experienced surgeons found BIMA a daunting procedure.

Another important reason would be proper selection. Obese patients, and others with diabetes , COPD and kidney failure would not be the most appropriate candidates for a BIMA procedure. The incidence of sternal complications are substantially increased in the above patient groups, hence they could be avoided, at least for the less experienced surgeon.

In ART more than 20% of patients assigned to the SIMA group had insertion of radial grafts. The radial graft is associated with greater latency than venous grafts, and consequently it is quite likely that clinical outcomes merged with the BIMA cohort. More than 3000 patents were assigned to BIMA or SIMA, the average age at randomisation was 64 years and 92% of patients were of white ethnicity.No check angiograms were performed to check for graft patency, nor were any tests done to check for myocardial viabilty.

So what should be the take home message form the ART trial ? Bilateral internal mammary grafting should be performed in suitable patients by reasonably experienced cardiac surgeons. It should be performed in patients at low risk for sternal wound complications. Maybe the results of the ongoing Randomization of Single versus Multiple Arterial Grafts (ROMA) trial may provide more clarity. Co incidents the Oscar favourite for this year is the Mexican movie ‘Roma’, which has garnered 10 nominations. Roma spelt backwards reads Amor. Amor is love in Spanish; some one has pointed out that the movie ‘Roma’ attempts to make us reflect on the rapidly dwindling emotion of love on merciless planet called Earth.