2020 will be considered a seminal year for ushering in the new but deadly Coronavirus and the CAA. The silver lining probably is the new kid on the block number 4, Shreyas Iyer who has emerged as the number 4 batsman in limited over cricket by playing some breathtaking shots in consecutive innings against big teams such as Aussie ( in India) and Kiwis ( in New Zealand). Astonishingly the young man was not even thought of during the last World Cup inspite of a gaping black hole in the middle order. Importantly, Iyer ensured the Delhi IPL team reached the semis for the first ever time in the last IPL tournament, Delhi had all these years nestled in the bottom. There is captaincy potential in the lad; he without any doubt is a special talent.

The government has set the cat among the pigeons with the CAB and NRC. No Indian needs any elaboration on the acronyms, we have a raging bull in the China shop, only this time the shop is very much Indian. It is quite manifest the current rulers want to pulverise the constitution; they were absent when it was made; so therefore the onslaught now to make amends. Current thinking is not to care a hoot about minorities , women or the less privileged. If they had their way they would raze JNU, Jamia, and AMU to the ground and any other university that whispers any protest. Stephen’s too is up in arms. Few know the Quit India was almost launched from Stephen’s College. The then Vice Chancellor then mercifully looked the other way despite concerns of the Viceroy. The IIM’s and IIT’s have expressed their strong disapproval of the JNU fiasco, which of all things demonstrated the current dispensations penchant for cracking open heads of girl students. Gallantry at its best by the intrepid Delhi police.

The economy persists in lurching from disaster to another, it in fact is plummeting quicker than a tear-gas grenade hurled into a library. Hence, some learned chaps have cautioned us of diversionary tactics by the government. Divert and distract seems to be the current mantra of there government. But to fathom the working of the government it is critical that one reads up the biographies of Savarkar and Golwalkar, if not Doctorji Hedgewar. All three were very clear that Muslims at best can be second class citizens within the boundaries of Mother India, and that this privilege should be considered to be a favour. Christians too could settle for runners up if they were serious about settling in the local habitat. This is the core principle of Hindutva, that Hinduism is a more than a cut above the rest of the pack. Hence the brazenness in the current acceleration of transmitting the finer print in the party’s manifesto; comparable to the transmission of the new corona virus evolving from central China. A noted historian has rightly stated that our contemporary image abroad is mud or something to that affect. Not untrue, but there may be a tinge of exaggeration, for why would the West really care what transpires within our shores. They have their own problems, and serious ones at that. The Republic Day parade tomorrow will be watched by the Brazilian president who has gone on record that he wished all indigenous folks of Brazil should have been exterminated. A brilliant choice for chief guest; an amazing resonance of our current mindset.

The last day of the last decade provided the information that a brand new viral disease had emerged in Wuhan, China. Within a week a new virus was recognised, which the WHO has named “2019-nCoV”. I wish some one in the WHO had had the common sense to call this new virus “2020”, which sounds as deadly as the old “ 303” rifle the Indian soldiers had to employ in the 1962 Chinese conflict. 2019-nCoV sounds like an ISRO satellite. Any way the new virus has an RNA core and belongs to the corona virus family, corona means crown or the halo surrounding the sun. The arteries supplying oxygen to the heat are also called coronary arteries because the heart is considered the crown. This new RNA virus is called corona because under the electron microscope it is round in shape with spikes poking out from its periphery. Coronavirus are famous for producing that sniffling cold you get, but that is self limiting without any residual affects. The common cold by itself is benign. However, coronavirus have been incriminated in the severe acute respiratory syndrome or SARS, and also the Middle East respiratory syndrome or MERS. SARS carried a mortality rate of 10%, which is more than a heart attack treated in a city hospital. The mortality rate for MERS has been reported as high as 37%. The take home message is clear, the coronavirus is associated with considerable lethality. This is there reason the entire medical world is carefully looking at China. The Chinese have already reported 56 deaths, and more than 1500 confirmed cases. The mortality rate target is unclear right now, but is close to 5%, but this can vary for little is known about the toxicity of the virus or the response of a victim.

This week’s lancet carries the first clinical report that is quite disturbing. The cohort is just about 40 patients, of which one third landed up in the intensive care unit; and as many as 15% of these succumbed to the infection. Almost all patients present with fever, more than two thirds had cough and almost 50% suffered from weakness or muscle ache. More than half complained of shortness of breath. The paramount reason for breathless is the fact that this new virus attacks the lungs and not just the throat. Patients so far have not presented with a sore throat, the reason being that the 2019-cCoV launches an attack at the intraepithelial cells of lung tissue. 2019-nCoV not unlike other virus disease presents with low white cells and reduction in lymphocyte count, and raised liver transaminase levels.Where did this new virus suddenly come from? The internet is already awash with conspiracy theories that the virus already has a patent with a vaccine ready for administration. This is of course nonsense. The American Supreme Court has already declared that because virus are precent in nature there can be no patent for a virus sequence. Also there is absolutely no vaccine, neither is there a vaccine for SARS or MERS. The origin of the virus responsible for both SARS and MERS is the bat. In the case of SARS the concerned virus jumped from an infected bat to a civet and from that to humans. The MERS virus similarly vaulted from bats to camels and thence to humans.

The New England Journal of Medicine has published a paper, which defines the genome sequence of the 2019-nCoV. The genome will go a long way to understand the origin and evolution of the virus. And therefore a step however small has been made to construct a vaccine. Interestingly there are reports that the 2019-nCoV probably also originates from bats. But the intermediary animal is as yet not known. Some scientists are pointing fingers at a Chinese snake or the cobra. Crucially ground zero is a sea food market in Wuhan that sells just about any meat, the Chinese have a very diverse and heterogenous menu. The lesson for now is to refrain from eating exotic meats.

The 2019-NCov attacks the lungs with development of multiple pneumonia in both lungs. Soon the lungs adopt a ground glass appearance on a CT scan. This is when matters have gotten very grim for the patient can now die. There is no specific treatment, management being supportive. Treat fever with paracetamol, and when the lungs begin to fail intubate there patient and attach him to a mechanical ventilator hoping for the best. There is no proven antiviral treatment for the coronavirus. A combination of lopinavir and ritonavir did show some promise in patients with SARS, but this was in the lab and not in humans.A randomised study is being done in Saudi Arabia in patients with MERS ; a combination of lopinavir, ritonavir and recombinant interferon beta-1b versus placebo; the results are awaited. But no effective treatment has been developed for the new virus for obvious reasons, it is clinically less than a month old. The genome sequence has established birth of the virus as recently as October-November of 2019. The new virus genome sequence suggests its is 80% similar to the SARS virus. The 2019-nCoV virus has already been detected in Taiwan, South Korea, Japan,Vietnam and as close as Nepal. Cases have been reported from the USA and Europe. There is no reason to believe that 2019-nCoV is not already in India. We have scores of students studying medicine in China apart from people in the business community.

The WHO has swung into action by providing simple guidelines for prevention, wash your hands as often as possible with soap, stay clear of people with fever and cough, do not eat uncooked meats, if you have fever with cough and breathlessness consult a doctor as soon as possible. The new virus is capable of being transmitted from human to human, manifesting in global spread. Management is still unclear, but in the event of pneumonia admission to an ICU is warranted if not isolation. It was imperative that scientists, physicians, researchers and health workers crystallise a blueprint to diagnose, treat and contain 2019-NCoV. This is easier said than done; likewise the vigil regarding CAA and NRC will be a formidable task. The treatment for the latter understandably much more difficult. As for the 2019-nCoV infection, we  now have 1600 confirmed cases, world wide, surely a conservative estimate. There have to be many more sub clinical patients, or those with less severe symptoms and therefore have not bothered to walk to a physician. Huwan is under lockdown, which implies no one is allowed to leave it unless there is an emergency. Railway stations and airports are closed. Two doctors treating patients with the new virus have died, one from a heart attack. Wuhan today is a ghost city. The Daily Mail (UK) carries a story that 90,000 people have been infected by 2019-nCoV in China. 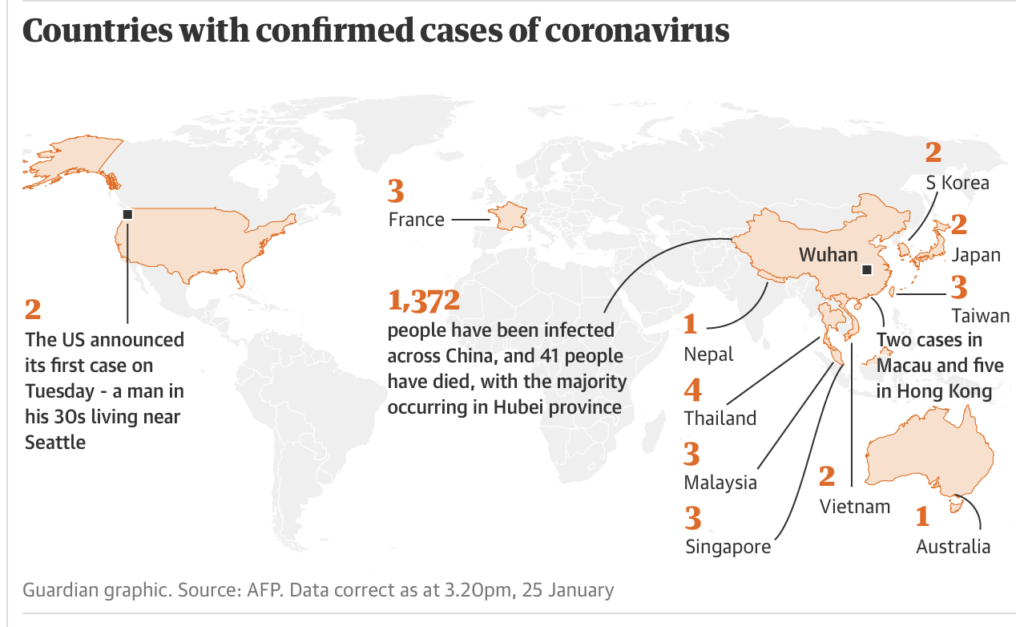