As the flu epidemic tightens its grip both in the U.K. and the US it is abundantly clear to scientists that the predominant culprit is the H3N2 subtype influenza A virus. The H3N2 virus subtype is disliked by physicians because it is far more potent than the other A and B influenza virus. H3N2 is capable of rapid transformation to elude the immune system of the human body. It is also associated with more severe symptoms, hospitalisation and death. The other troublesome fact is that vaccination against the H3N2 subtype is feeble, in fact influenza vaccination has been found to be effective for prevention in only 10% of people over 60 years. Vaccines against measles provide 97% protection and over 90% protection against small pox and polio. In short the flu vaccine is far from perfect. Currently more than 6% of people visiting outpatient departments of hospitals in the US are suffering from flu like symptoms, significantly greater numbers than previous years.

People with mild symptoms are best managed at home with lots of oral fluids and rest. In case symptoms are severe, or the elderly, or people with chronic disease such as diabetes, asthma, chronic heart disease, treatment may be initiated with Tamiflu within 2 days of symptom onset. Tamiflu does not reduce mortality but may reduce duration and severity of symptoms. Pregnant women with flu are considered high risk for complications. People down with flu are advised to wash hands frequently with soap, isolate tooth brushes and wash their bed sheets/pillow covers every third day. Recovery from flu usually takes 5-7 days. Antibacterial wipes should be used to wipe remotes, switches and door knobs. The British Medical Journal had warned that oseltamivir or tamiflu was no better than paracetamol in patients with flu, but research by the London school of hygiene and tropical medicine reported that tamiflu significantly cuts incidence of serious complications such as pneumonia. This report a meta analysis for whatever it was worth got published in the Lancet. Crucially tamiflu can cause nausea and vomiting, worse it has been reported that 8 Japanese children committed suicide after taking tamiflu.

A substantial number of people with flu may not be symptomatic at all or may suffer few and mild symptoms. Those people who do suffer from symptomatic flu complain if fever, sore throat, cough, body aches and head ache. Some may ever report vomiting or diarrhoea. Most people recover but a few need hospitalisation for respiratory complications such as pneumonia and very few may be incapacitated by neurological problems. Over the years there was strong suspicion that flu may trigger cardiovascular disease including heart attacks. There were however no adequately powered studies confirming the association of flu with acute myocardial infarction ( AMI). 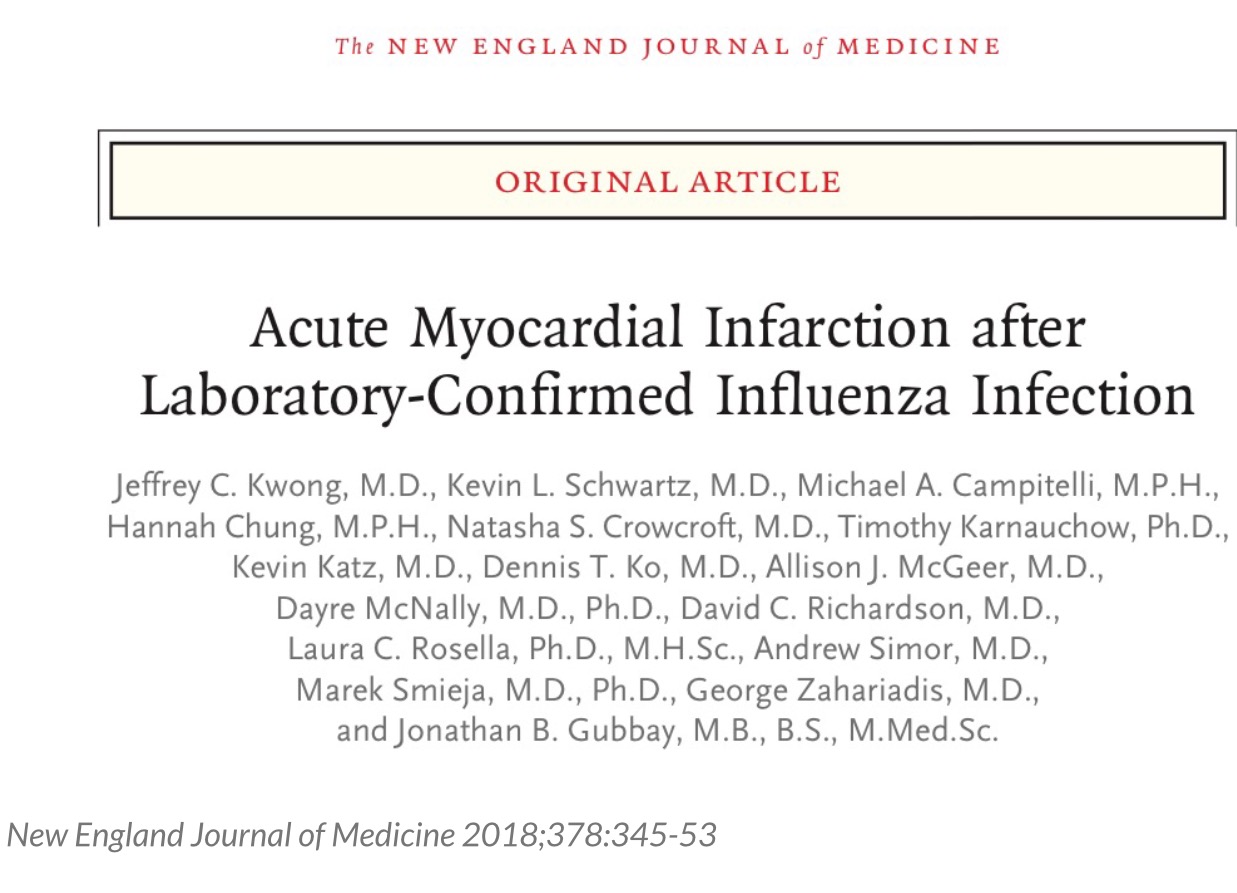 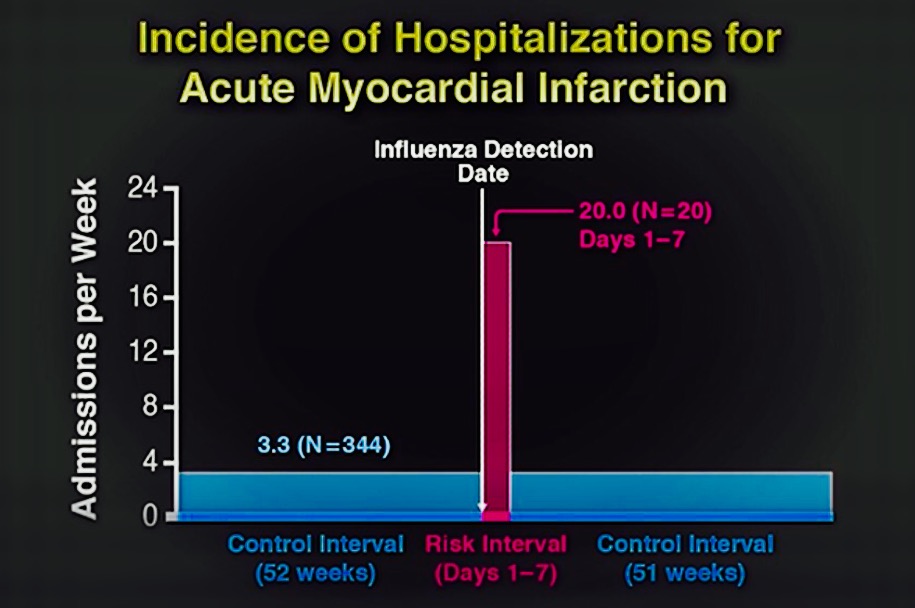 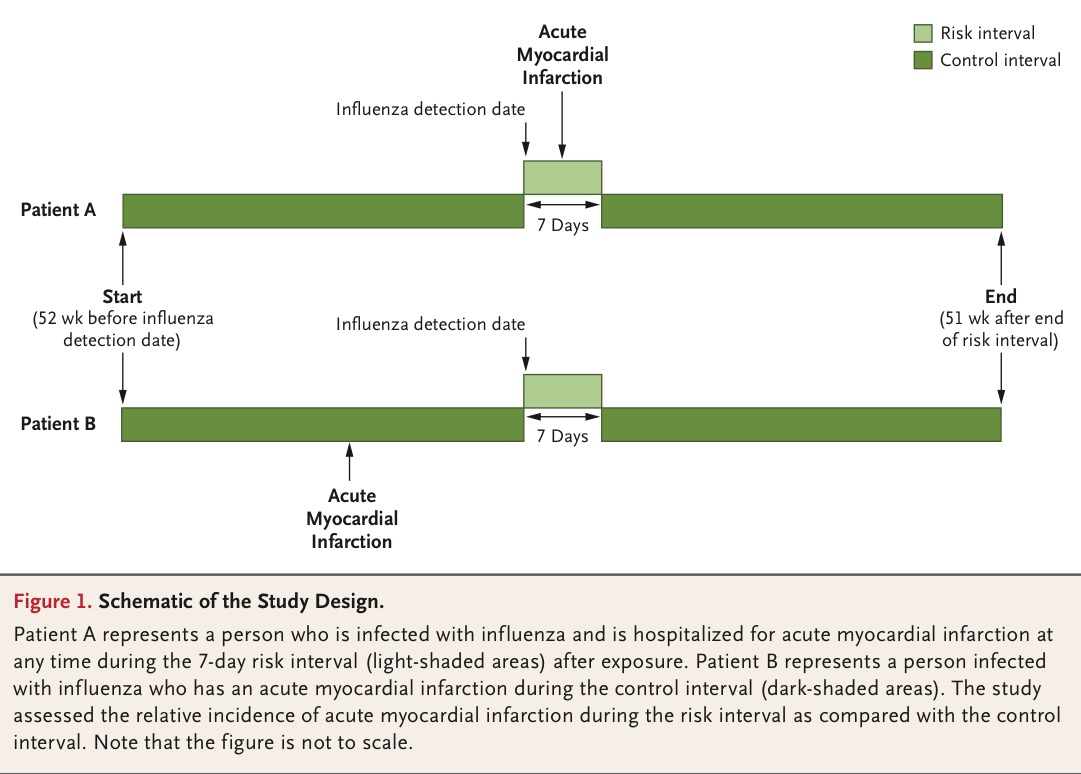 There is now for the first time a study including laboratory confirmed cases of flu who have a 6 fold increase in incidence of acute myocardial infarction in the week following day of detection. More than 360 patients of acute myocardial infarction with confirmed flu were studied one year before and after laboratory confirmation. There were 20 admissions in the 7 days post confirmation (20 admissions per week) and 340 admissions during the rest of the days (3.3 admissions per week). The median age of people studied was 77 years, 48% were female,49% had diabetes, 85% had hypertension, 38% had dyslipemia, and 24% had been previously admired for myocardial infarction. More people aged greater than 65 years had heart attacks but this was not significantly different, more patients with influenza B had heart attacks but again not significantly. Incidence of heart attack did not differ with or without prior vaccination. This is an important finding because the suggestion is that vaccination against influenza may not prevent a heart attack if a person develops influenza or flu. The ability to prevent flu by vaccination ranges from only 10% to 40%.

More than a decade ago a paper showing association between acute myocardial infarction or stroke and the first 3 days following a respiratory infection. Risk was also increased after an episode of urinary tract infection but to a lesser degree. More than 40,000 patients of heart attack and stroke were included in the analysis, the researchers concluded that a transient increase in systemic inflammation triggers vascular events but were unable to pinpoint exact causal mechanisms.

A study from Wales has also pointed out an increased incidence of heart attack immediately following influenza and influenza like illness , but does not define the pathogenesis. A hypothesis that fever induces haemodynamic stress that in turn initiates vascular events such as acute myocardial infarction and stoke. The researchers concede that vaccination is not robust in preventing influenza especially in the elderly and in those with chronic disease, but still advocate use of vaccination.

So far mechanisms to explain increased incidence of heart attack following flu are that apart from a systemic inflammatory state, there may be heightened platelet activation and increased vasoconstriction due to endothelial dysfunction. Hypoxia because of respiratory involvement could contribute destabilisation of a coronary artery plaque. Fever with accompanying tachycardia may also aggravate the situation, apart from a procoagulant effect. More people, in fact twice the number of people die from acute myocardial infarction than pneumonia or flu itself. Elderly people and those with cardiovascular risk factors are particularly vulnerable to serious cardiac complications of flu.
The latest study reporting laboratory confirmed influenza can trigger acute myocardial infarction has discussed the paradox lack of efficacy with vaccination in preventing cardiac events. The authors underline the fact that their study was not assessing the effectiveness of vaccination in prevention of acute myocardial infarction. They make the odd observation that “since vaccination of adults is only approximately 40 to 60% effective in preventing laboratory confirmed influenza infection, this study shows that if vaccinated patients have influenza of sufficient severity to warrant testing their risk of myocardial infarction is increased to a level that is similar to that among unvaccinated patients.” Some people may argue that vaccination then does little or nothing to help to prevent acute myocardial infarction, and they may be correct.

So for now we need a randomized trial that is adequately powered ( and preferably not sponsored by the industry ) to figure out whether vaccination indeed prevents acute myocardial infarction subsequent to infection by the influenza virus. A trial is currently checking whether a high dose influenza vaccine is more effective than standard dose vaccine in prevention of heart and lung complications in 9300 high risk individuals with previous heart attack or heart failure. The American Heart Association recommends vaccination as secondary prevention in people with coronary and other atherosclerotic vascular disease, the level of recommendation is class I, but with scanty evidence. The problem is that current vaccines are feeble and largely ineffective in people who are most vulnerable to influenza.