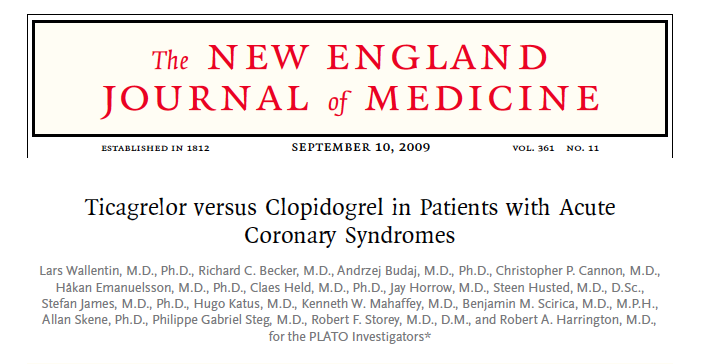 My heart sank as I rose to speak in the mid-term Delhi cardiology mid year meting because there was just a handful of delegates left to hear me out. I had wanted very much to stress the redundancy of studies done in the recent past because hardware used then differed from drug eluting stents (DES) currently implanted. Clinical outcomes with second generation DES have improved substantially. Looking at the almost bare hall I for a moment thought that Hurricane Irma had changed course and was barreling to New Delhi. I had never imagined a Delhi cardiology meeting unable to draw less than a dozen physicians at 7 o’clock in the evening. And I had all these years always imagined Delhi to be a city having a fair share of intellectual worth.

I wanted to tell them about the PLATO trial (published in 2009) that randomized more than 18,000 patients of acute coronary syndrome to clopidogrel or ticagrelor. The researchers had reported that Ticagrelor combined with aspirin reduced the composite clinical outcome of death, myocardial infarction, and stroke from 11.7% to 9.8% as compared to clopidorel and aspirin. An absolute reduction of 1.9%. . The absolute decrease in mortality at the end of one year was just 1.4% (5.9% to 4.5%); a relative 22% reduction. Hence 71 patients have to be treated with ticagrelor for one year to prevent one death.Ticagrelor was however associated with more non CABG related major bleeding than clopidogrel (4.5% vs. 3.8%; p=0.03), including more fatal intracranial bleeding. It should also be noted that a loading dose of 300 mg clopidogrel was administered in only 60% of patients in the clopidogrel group.

Ticagrelor was also found to cause breathlessness, brady- arrhythmias, increase in serum uric acid and creatinine in some patients. Ticagrelor is supposed to act faster than clopidogrel and has the advantage of reversibly blocking the P2Y12 receptor. Clopidogrel has a slower onset of action apart from irreversibly blocking P2Y12.

An excellent paper presented in the European Society of cardiology meeting held less than a fortnight ago called the “CHANGE DAPT” trial and was published simultaneously in EuroIntervention. The CHANGE DPT trial included more than 2000 patients who underwent PCI for acute coronary syndrome. This study, albeit observational, followed an impeccable methodology. The primary composite endpoint was net adverse clinical and cerebral events. Patients (1,009) treated from 2012 to 2014 received clopidogrel; and those (1,053 patients) treated from 2014 to 2015 were given ticagrelor. The ticagrelor patients had more procedures by the radial access and fewer patients from this cohort received glycoprotein IIb/IIIa inhibitors. 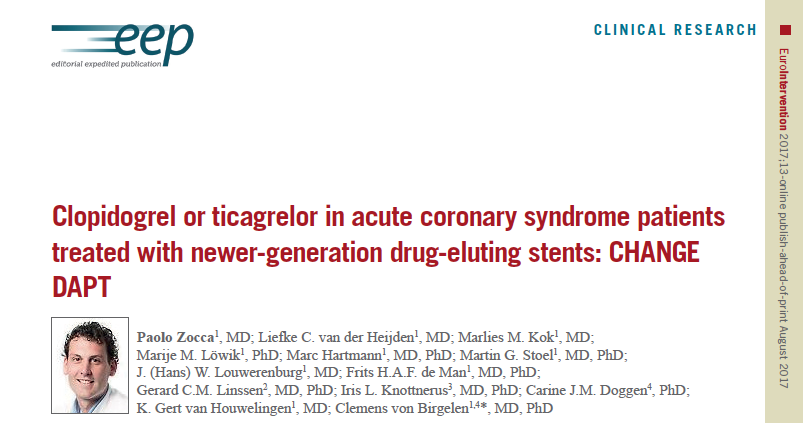 The paper concluded that the one-year NACCE was significantly higher with ticagrelor than with clopidogrel (5.1% vs. 7.8%; p=0.02). There was no difference in ischemic endpoints but ticagrelor had more than double the bleeds as compared to clopidogrel. Propensity score adjusted multivariate analysis confirmed higher NACCE and greater major bleeding risk with ticagrelor.

Despite CHANGE DAPT being an observational trial we must make note of comparable ischemic clinical outcomes with clopdigrel and the more powerful ticagrelor. The only probable reason for similar clinical outcomes has to be the use of second generation DES in CHANGE DAPT. PLATO had employed bare metal stents in the majority of patients while 20% of patients in that trial got DES, which were first generation DES, considered obsolete currently. 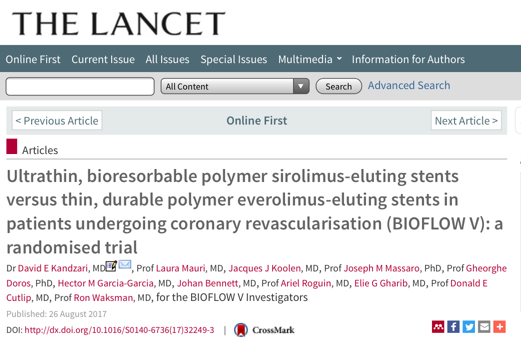 Procedural success defined as <30% residual stenosis of target lesion was better with the new stent than the Xience stent (93.9% vs. 90.1%; p=0.029). At 12 months the primary end point of target lesion failure was 6.2 % with the new DES versus 9.6% with Xience (p=0.04). Target vessel myocardial infarction was significantly less with the new DES (4.7% vs. 8.3%). The remarkable finding of superior clinical efficacy with the new biodegradable polymer sirolimus eluting stent raises the tantalizing probability of further improvement in clinical outcomes. We should not be surprised if more adequately sized randomized trials mirror the BIOFLOW-V data.

We must however also scrutinize each and every data on scientific merit so that we are not bowled over by the all-pervading spin of the industry. The bioresorbable scaffold is a textbook example of how the industry managed to infiltrate the best medical journals and just about every national/international interventional cardiology meeting to present their spin until the company was compelled to shut down sales due to ridiculously high stent thrombosis and myocardial infarction rates. 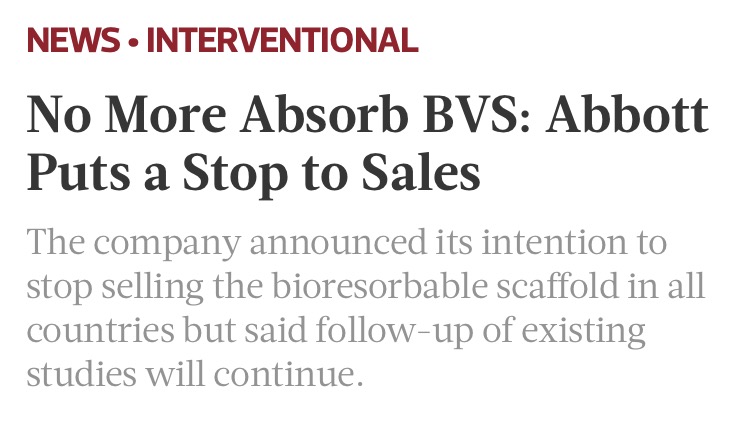