There are now 3 case reports published that describe an acute myocardial infarction soon after the first dose of the Moderna mRNA vaccine.

The first case is a 96 years old lady who had no previous cardiac history. She developed chest pain one hour after being administered the first dose of Moderna Covid vaccine. Her ECG showed ST-segment elevation in the V1 V2 and aVL leads. A bed site ultrasound revealed anterior wall motion abnormality. The patient refused cardiac catheterization and was therefore put on medical treatment consisting of a heparin IV drip. Her troponin was raised. The patient was discharged in a stable condition after 3 days.

The second patient was a male who had chest pain with radiation to the, lower jaw soon after the first Moderna vaccine jab. The symptoms began within 24 hours. A CT coronary angiogram revealed a totally blocked left circumflex coronary artery. On invasive coronary angiography in the cath lab there was a 90% block in the left circumflex artery that was predicated and stented.

Excellent antegrade flow was achieved in both cases.

The take-home message is that albeit an acute heart attack is uncommon post-vaccination it must always be kept in mind if a person develops chest pain soon after the first dose of the Moderna mRNA vaccine against Covid 19. The exact pathogenesis remains to be established, but these 3 cases presented with a thrombus in their culprit vessel.

But the question remains, what exactly triggered the thrombus in the culprit coronary artery? 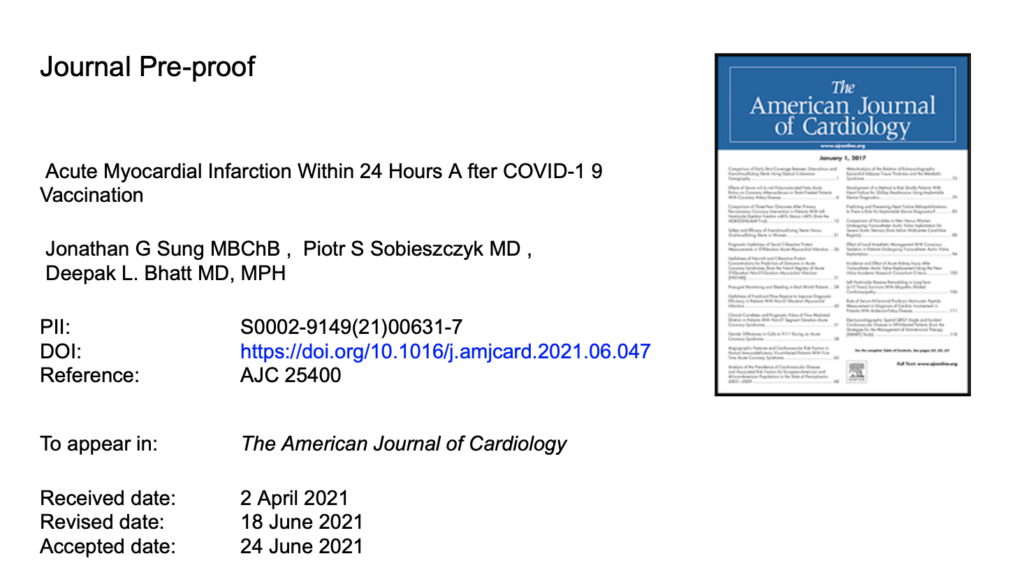