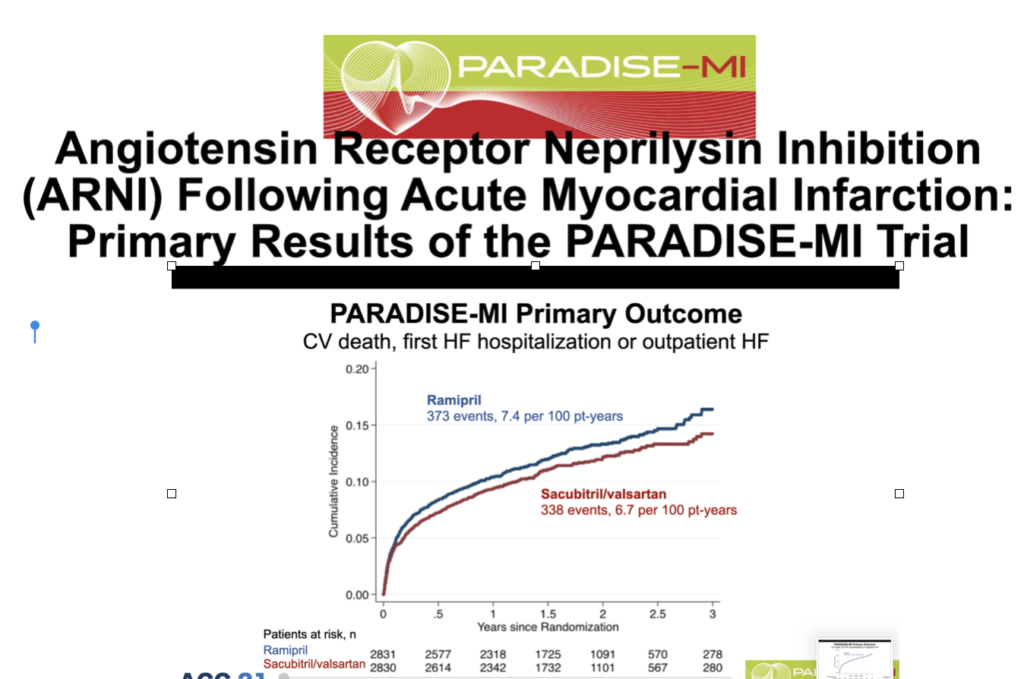 The combination of an angiotensin receptor blocker and a neprilysin inhibitor (ARNI) made a spectacular appearance with the large randomized Paradigm trial showing the significant lowering of mortality and hospitalization when compared with valsartan alone, in patients with heart failure with reduced ejection fraction (HFrEF). The ARNI used was a molecule that contained sacubitril and valsartan. There was an absolute 4.7% absolute reduction in events. Many physicians embraced ARNI in treating patients with HFrEF based on these results. The drug has been introduced in India and is replacing angiotensin-converting enzyme inhibitors in the management of heart failure patients. PARADIGM was a large study that included more than 8000 patients with HFrEF.

ARNI was next employed in another large randomized trial with about 5000 patients with HFpEF or heart failure with preserved ejection fraction. This was named the PARAGON trial. These patients (NUMBER 4822) had a left ventricular ejection fraction of 45% or more, raised levels of natriuretic peptide, and structural heart disease. In PARAGON there was no difference in hospitalization and death from cardiovascular causes with ARNI in patients with HFpEF.

A case was however made by the manufacturing company that certain subsets benefited with ARNI, namely female patients and those with a lower ejection fraction. This seemed more of a spin because HFpEF is a heterogeneous disease with multiple causes that defy shoe fit all approach. Also currently it is estimated that a significant proportion of patients with HFpEF suffer from cardiac amyloidosis that cannot possibly improve by an ARNI.

Recently another double-blind active-controlled randomized trial comparing ARNI with an old angiotensin-converting enzyme inhibitor in patients with HFrEF soon after acute myocardial infarction has been presented in the recently concluded ACC meeting. Patients included had to have an ejection fraction of 40% or less and /or pulmonary congestion. More than 5600 patients were randomized within a week of acute myocardial infarction to either an ARNI or ramipril. This is the PARADISE-MI trial that included patients on an average 4 days after myocardial infarction. The average ejection fraction was 37%. Sacubitril/valsartan 200 mg was matched with 5 mg ramipril, both drugs being given twice a day, along with standard post-heart attack treatment.

The mean age is 64 years and a quarter are women in this trial. Almost 90% underwent PCI. More than 90% of patients received dual antiplatelet and statin therapy. Beta-blockers were administered to 85% while an aldosterone antagonist was given to 40% of patients.

The big problem is the prohibitive cost of sacubitril/valsartan as opposed to that of ramipril. The cost of 10 tablets of 2.5 mg ramipril in India is Rupees 30 only, whereas 14 tablets of ( 24mg/26 mg) ARNI (Wymada) will cost at least around  Rupees 880.

Now considering that there is little or no difference in clinical outcomes between ARNI and ramipril in patients with heart failure soon after acute myocardial infarction, ramipril may turn out to be the winner, even though around 10% of patients could develop persistent cough leading to discontinuation.

The PARADISE trial is a good example of corporate pressure on the medicine market in patients with heart failure. The spin is quite obvious. The aim is to use an ARNI in as many patients as possible, much like the mass vaccination drive in children. Children get a much less severe infection, rarely die, and transmit the Covid 19 virus far less than adults. This is the reason why the UK government has opted not to mass vaccinate children and to do so only in the vulnerable ones keeping in mind the development of myocarditis soon after the second mRNA jab in children, particularly boys. The risk-benefit ratio in vaccinating children remains blurred, and therefore ideally one must wait for more data before launching a mass vaccination drive in the young ones.

Vaccinating vulnerable adults is more in line despite significantly reduced efficacy against the Delta variant in Israel, and mounting new cases in high vaccinating countries such as the UK and Holland.